Yes, we pulled back on Monday, but there was no selling. It dried right up. There wasn't a whole lot of buying, either, but the selling was minimal.

The easiest way to see this is that after the initial down opening, the upside volume was greater than the downside volume for both Nasdaq and the New York Stock Exchange most of the day. The NYSE ended with 67% upside volume and Nasdaq ended with 59%. The market still looks sideways to me.

But aside from that, it was a pretty sleepy day in the market. Oh, sure, the precious metals finally got in gear and joined the inflation trade, but let's step back for a minute and talk about the U.S. dollar. Everyone seems to be on the Inflation trade now. Just look at Barron's, who is not exactly known for being ahead of the curve, and check out what their cover story was this past weekend: 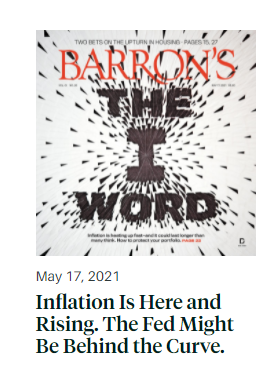 I can't help but think of this, because first, the precious metals are typically the first area to move if one thinks of inflation, and here they seem to be the last to finally get out of the box. And second, who doesn't see the inflation?

Then there is the U.S. dollar. No one seems to even discuss it anymore, but that is quite a decline since early April, isn't it? And now it finds itself testing support for the second time in a week and the fifth time this year.

The Daily Sentiment Index (DSI) for the Dollar Index is currently 18. We all know if the DXY breaks that support around 90, it will draw some eyeballs. Maybe even some hysteria. And likely a DSI reading that comes close, if not dips, into single digits.

As a reminder, single-digit readings in the DSI are extreme. Recall the bonds got to single digits at the lows in February, and again in March just as everyone was predicting much higher interest rates.

Readings over 90 are also extreme; Nasdaq last had one at 91 on April 9. It took a week or so, but eventually Nasdaq succumbed to such an extreme reading.

Thus if we break this 90 support area on the Dollar Index and get folks to see it, comment on it, get upset over it, and we get that DSI down at or near single digits, I'd say we'd be close to an end to the dollar decline (for now) and maybe even the commodity run (for now).

I think this is what is not on most radar screens.

Get an email alert each time I write an article for Real Money. Click the "+Follow" next to my byline to this article.
TAGS: Currencies | Investing | Technical Analysis |