Berkshire Hathaway (BRK.B) : "I still like it." That is what Jim Cramer said to one caller during the Lightning Round of Mad Money Friday night. Let's check the charts and indicators of BRK.B because I cannot imagine Warren Buffett looking at the charts.

In this daily bar chart of BRK.B, below, we can see that prices have largely traded sideways the past 12 months. If you went long last June around $185 then you have made some money with prices now around $205 but the up and down swings are not exactly easy to weather.

Prices corrected to the downside in December and even broke below the October low, but they have come to the $205 area or the middle of the sideways trading.

The daily On-Balance-Volume (OBV) line has declined from its early December peak and suggests that sellers have been more aggressive the past seven months.

In this weekly bar chart of BRK.B, below, we can see that prices rallied from June of 2016 to highs in late 2018. We can also view the price action from early 2018 as sideways with prices crossing above and below the cresting 40-week moving average line.

The weekly OBV line shows an up and down pattern from early 2018, while the weekly MACD oscillator has been largely bearish the past year and a half.

In this Point and Figure chart of BRK.B, below, we can see a bearish downside price target of $175 being projected. 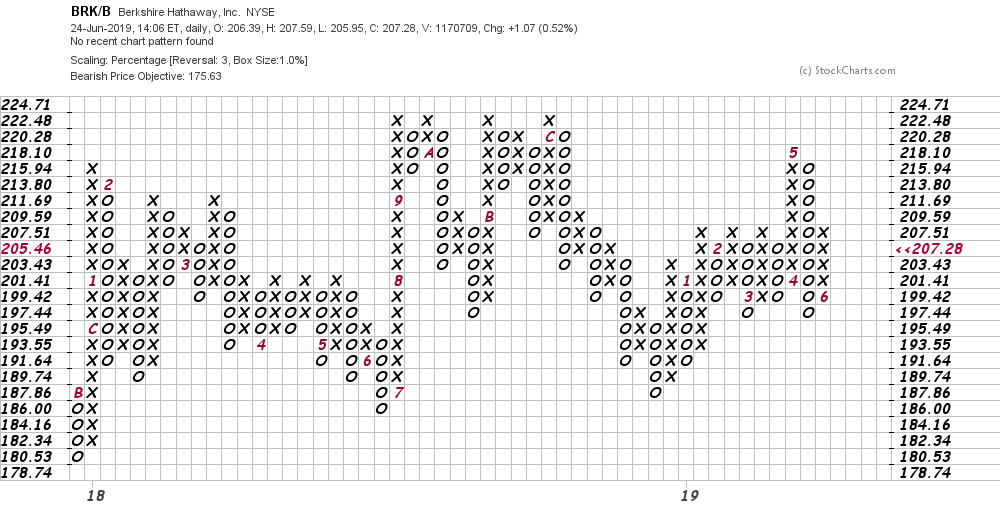 Bottom line strategy: I know that being bearish on Berkshire Hathaway means I will not get invited to speak at the CFA society in NYC, but a trade at $195 could open the way for further declines with $175 as the Point and Figure price target. Past results are....

Get an email alert each time I write an article for Real Money. Click the "+Follow" next to my byline to this article.
TAGS: Investing | Markets | Stocks | Technical Analysis | Trading | Consumer Services | Mad Money | Consumer Products | Consumer Discretionary | Warren Buffett