When I want to bet on America, I usually get long Berkshire Hathaway (BRK.A) (BRK.B) . As I am a common man, I usually get long the "B" stock. I have been long BRK.B for months now as not only do I tend to root for the home team, like you, I have noticed that BRK.A and BRK.B did not suffer the same correction/bear market that the rest of the broader marketplace did in early 2022. How long are Berkshire's tentacles? Just yesterday my wife wanted to go to Dairy Queen for some ice cream. Shortly afterward, I was working in my yard, and happened into my neighbor who was working in his. He mentioned that he had just retired after more than 30 years at GEICO. I thought to myself... Hmmm.

Berkshire Hathaway, led by the brilliant pair of Warren Buffett and Charlie Munger, has been busy of late. Just last week, Berkshire's BNSF Railway (the old Burlington Northern Santa Fe) unveiled an agreement with trucker JB Hunt (JBHT) to work together on improving intermodal capacity in order to try to better keep up with demand. The next day, it was reported that Berkshire had added more than 16M shares of Occidental Petroleum (OXY) to its existing position. Then came today... Monday.

This morning, Berkshire Hathaway announced an agreement to acquire insurer Allegheny (Y) for a cool $11.6B in cash or $848.02 per share. Alleghany stock closed at $676.75 on Friday, so this deal comes at a 25.3% premium to that close, a 16% premium to Y's average stock price over 30 days, and at 1.26 times book value as of year's end. Alleghany will join fellow insurers Gen Re and the already mentioned GEICO on the list of subsidiary companies already parented by Berkshire.

In fact, I can find 62 - there may be more - Berkshire Hathaway subsidiaries. Beyond GEICO, Gen Re, Dairy Queen, and BNSF, some others you are probably familiar with include Brooks (running shoes), Duracell (batteries), Pampered Chef, and Shaw Industries. Once we branch out from wholly owned subsidiaries into publicly traded companies, here Berkshire holds a serious stake, and we bring Apple (AAPL) , Bank of America (BAC) , American Express (AXP) , Coca-Cola (KO) , Kraft Heinz (KHC) , Moody's (MCO) , Verizon (VZ) , and US Bancorp (USB) , as well as the already mentioned Occidental Petroleum. These are just the names where Berkshire held stakes worth $5B plus as of year's end. We could add another 15 names if we cut that threshold at $1B plus.

While $11.6B might seem like a lot, and this will be Berkshire's largest acquisition since 2016 when the conglomerate purchased Precision Castparts for $37B, the fact is that on December 31st, Berkshire had a net cash position of $146.719B. This is incredible... Alleghany is just not a large acquisition by Berkshire standards or relative to Berkshire's books.

The firm at the time had $208.089B worth of current assets on those books versus $51.373B in current assets. That left the firm with a current ratio of 4.05, which is not just healthy, it's healthy at a scale and scope hard to imagine. The firm runs with total assets of $958.784B, which dwarfs total liabilities less equity of $443.854B. That last number includes long-term debt of $105.772B, which has been in decline. The firm has not materially adjusted its entry for goodwill in almost two years.

Readers might be surprised to hear that Berkshire Hathaway is lightly covered. About the most notable analyst covering the name is Brian Meredith of UBS, who is rated at five stars by TipRanks. Meredith rates both the "A" stock and the "B" stock as "buys"... and in late February, he raised his price target on BRK.A to $545,408, and his price target for BRK.B to $364. 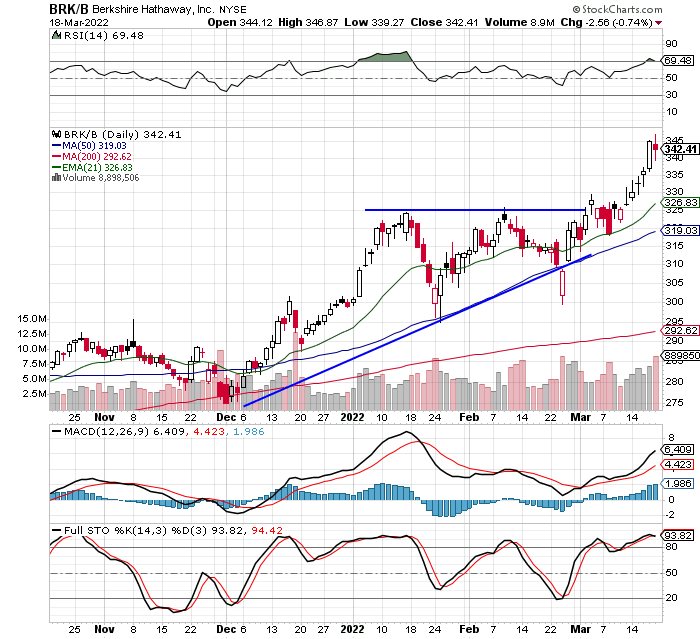 I find it incredible that in my late 50's I am well aware that while still no slouch, I am not as sharp as a tack at times, at least not compared to the standards that I set for myself. Then I listen to either Warren Buffett or Charlie Munger speak and to me, neither one of these guys sound like they have lost a thing.

I still count two phone conversations with Warren Buffett a couple of decades ago as two of my career highlights, and I am not the kind to get star struck. My line of work has put me in position to at least speak occasionally with many well-known individuals including several U.S. presidents and other heads of state. Still, Buffett stands out.

The "B" shares have broken out of an ascending triangle with a $325 pivot. You'll notice that in the chart I drew up the ascending triangle making an exception of February 24th, the day that Russia invaded Ukraine. This makes the triangle more obvious to the reader. The pattern is still valid whether or not that day's trades are included. Based on that $325 pivot, I have set a $390 target price for my own position. My panic point is now up to $317, which would be a serious break of the stock's 50 day SMA.

Readers should be aware that a basing period of consolidation where the stock moves sideways after its recent run would be constructive and not in my opinion, a negative. The stock currently sports an RSI reading of about 70, and a daily MACD as well as a Full Stochastics Oscillator reading where some sideways action might be called for.

Get an email alert each time I write an article for Real Money. Click the "+Follow" next to my byline to this article.
TAGS: Mergers and Acquisitions | Investing | Markets | Stocks | Technical Analysis | Trading | Warren Buffett