Omaha! Berkshire Hathaway (BRK.A) , (BRK.B) held the firm's annual meeting on Saturday, and they did it in person for the first time since the "before" times (pre-Covid). The firm's leadership, the 91 year old Chairman & CEO Warren Buffett and the 98 year old Vice Chairman Charlie Munger, answered questions about everything under the sun including nuclear war, Bitcoin, and US markets.

The firm also released first quarter earnings and revealed a number of changes made to the overall portfolio of investments.

I have spoken to Warren Buffett twice in my life. Both times he was looking for someone else.

For Berkshire, first quarter net earnings hit the tape at $5.46B, down from $11.711B one year ago. This came on operating earnings of $7.04B after accounting for $1.58B in investment losses. This ends in EPS of $2.47 (B shares) compared to $5.09 for the year ago period, and EPS of $3,702 (A shares) compared to $7,638 for the same quarter last year. Earnings improved across Berkshire's manufacturing and retail businesses, but insurance and railroads struggled.

Operating earnings for the first quarter of 2022 by segment relative to the year ago period were as follows...

In the earnings release, Berkshire discloses that the firm spent $3.2B on share repurchases during the first quarter of 2022, and that at the end of said quarter, the insurance float was approximately $148B (up $1B) from Q1 2021.

The Insurance (& Other) business had $44.89B in notes payable & other borrowings on the books, while the Railroad (& Other) business had $74.771B in such debt on their books. Together, the businesses owe $119.661B. The firm can not pay that out of pocket, but is not going to be asked to do so. The Berkshire consolidated balance sheet is probably more complex than it has to be, but does pass the Stage test.

In the above section, you learned that Berkshire had $106.258B in cash on the balance sheet on March 31st. Three months earlier, on December 31st, the firm had $146.719B on the books. Warren and Charlie have been shopping, and have revealed a number of portfolio changes over the three month period mentioned.

The headline? There are several. Probably the one getting the most attention is Berkshire's now 9.5% stake in Activision Blizzard (ATVI) . That stock closed on Friday at $75.60. Microsoft (MSFT) has agreed to acquire that firm for $95. So either this is one heck of a merger arbitrage opportunity or the deal falls apart. The last sale suggests that it might. Berkshire is betting on the deal closing. Berkshire has also increased its bet on energy, increasing holdings in Occidental Petroleum (OXY) preferred shares as well as Chevron (CVX) . Chevron, a Sarge fave... reported Q1 earnings (on Friday) growth of 261% on revenue growth of 70%, and still managed to disappoint Wall Street on both counts. Despite being well off of 2022 highs, CVX still closed on Friday up 33.51% year to date.

Don't forget that Berkshire had also agreed during the first quarter to acquire specialty insurer Alleghany Corp (Y) for $11.6B in cash. This deal is expected to close during the fourth quarter of this year.

I like Berkshire. I think most readers know that. I remain long the B shares. For me, a stake in Berkshire Hathaway is almost a hedge against myself. While we all think we would like to invest sanely and with a focus on value, committing at least part of my portfolio to an equity taken in BRK.B ensures that at least part of my investment aims will be targeted in that way. Of course, that strategy relies upon two fellows aged 91 and 98 not only not retiring, but also staying sharp. The two of them really are amazing. Oh, one last thing. I'm pretty sure that if someone offered Charlie Munger one Bitcoin for $25, he would buy it. He might sell it elsewhere almost immediately, but he'd buy it. 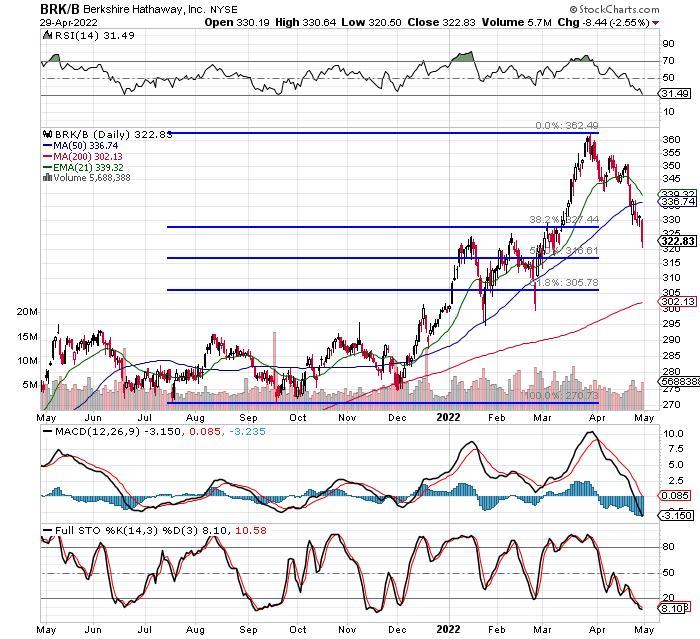 Get an email alert each time I write an article for Real Money. Click the "+Follow" next to my byline to this article.
TAGS: Earnings | Investing | Markets | Stocks | Technical Analysis | Trading | Warren Buffett