I am going to try to do something I have never done before. I have written many articles covering Bed Bath & Beyond (BBBY) in my time. Not sure if I have ever written a positive piece though. Then again, I don't think I have covered the stock since Mark Tritton has been CEO. (Tritton has been at the helm since November 2019.)

For the firm's fiscal first quarter, Bed Bath & Beyond reported adjusted EPS of $0.05, falling roughly three cents short of Wall Street's expectations. Revenue generation for the quarter amounted to $1.95 billion, which did beat Wall Street, while being good enough for year over year growth of 48.9%. Investors should note that GAAP EPS landed at a loss of $0.48 per share, which was a significant miss. The adjustment includes approximately $56 million worth of special items including but not limited to non-cash impairments, charges recorded in connection to the firm's restructuring and transformation initiatives, costs associated with store closures, and more.

The numbers behind the headlines paint a somewhat encouraging picture. You already know that revenues expanded 48.9% from the comparable period one year earlier. Comparable sales increased 86%, while Core sales increased 73%. Admittedly, last year was a pandemic induced weak year for most of retail, especially for those retailers still primarily dependent upon a brick and mortar physical presence. That said, comparable sales were still 3% higher versus Q1 2019.

Gross margin came to 32.4%, adjusted gross margin to 34.9%, helping explain the difference between the reported GAAP and non-GAAP EPS. Margin was driven at least in part by Owned Brand launches and increased digital penetration. Adjusted EBITDA landed at $86 billion. Increased sales and the already mentioned improved gross margin were offset in part by incremental investments to support the "Home, Happier" campaign in addition to launching Owned Brands.

The Buy Buy Baby subsidiary of 135 stores focused on clothing, strollers and other items aimed at families with infant to toddler aged children has continued to grow. Net sales increased more than 20% over Q1 2020, and low single digits (%) over Q1 2019 overall. This chain, specifically, has seen 50% growth in digital sales.

Cash and cash equivalents are down more than $250 million over three months. The entry for merchandise inventories is also lower, by about $140 million. This pretty much accounts for a rough $400 million reduction to both current and total assets. There is no entry at all for goodwill, which we like to see. Total liabilities have receded by about $250 million over the three month period, driven primarily by smaller entries for accounts payable and accrued expenses. Assets are in size considerably larger than liabilities excluding shareholder equity. The balance sheet is in better shape than I expected given what the firm has been through. 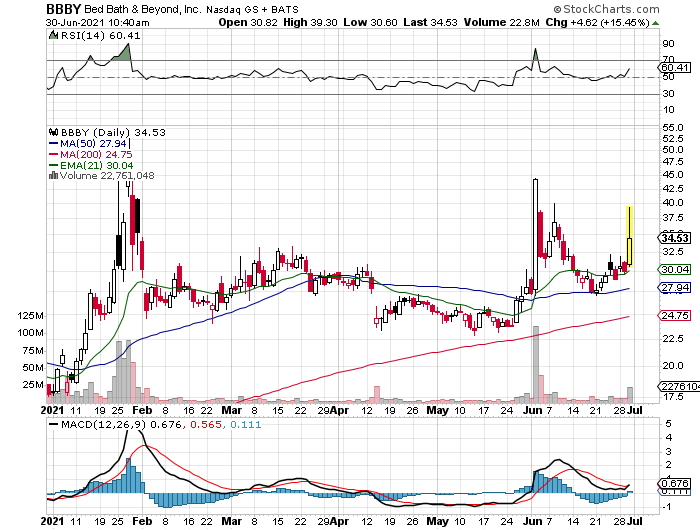 The chart doesn't tell you all that much beyond the fact that this stock has been remarkably stable all year long. The shares used the 50 day SMA as support in mid-June and retook the 21 day EMA in the same movement.

Wednesday's spike is probably not the time to get involved. You know how I loathe chasing a stock on the run, but this stock is investable. That's a lot to say, given their semi-recent past. I would prefer to wait until the shares either come back to the 21 day EMA or that green line catches up to the shares.

You Could Say I'm 'Fed' Up With These June Minutes

From one logic-defying FOMC statement to the next, I'm not sure what I'm even reading at this point. But I do know how I'm investing.

As Harmony Biosciences Breaks Out to a New High, What's Next?

Here's Where Shares of Walmart Are Attracting Buyers

Roblox: You Don't Have to Imagine That a Base Has Developed