In the world of corporate execution, there's bad, and then there's Bed Bath & Beyond (BBBY) bad. This (Wednesday) morning, Bed Bath & Beyond released the firm's first quarter financial results. It reads like fiction. If you are a shareholder, I suggest going out for some Holy Water before reading further.

For the three month period ending May 28th, 2022, BBBY posted adjusted EPS of a loss of $2.83 per share (GAAP EPS: $-4.49, not a misprint) on revenue of $1.463B. Both numbers fell well short of Wall Street's expectations, the adjusted bottom line number by a country mile, no... make that several country miles. The revenue print was good enough for a year over year contraction of 25.1%.

Comparable sales fell 23%, which was even worse than the -20% projected. On that note on-line sales decreased 21% year over year, -27% for the Bed Bath & Beyond brand and down an undefined mid-single digits for the BuyBuy Baby brand. Where are you going? There's more. Gross margin dropped to 23.9% from 32.4% one year ago, as "transient" costs accounted for 840 bps worth of that decline.

Out With The Old, Again

Apparently, that's it for Mark Tritton. Remember when Mark Tritton was brought in as CEO? That wasn't that long ago... November 2019. In his defense, a global pandemic would change retail forever just a couple of months later. Not so much in his defense, even well after the impacts of the pandemic had stopped altering human behavior, things at BBBY just kept getting worse.

Tritton will be replaced on an interim basis as CEO by Sue Gove, who had been an independent director on the firm's Board. Gove comes with more than 30 years of retailing experience, which includes time spent as CEO of Golfsmith and COO of Zale Corp. Gove will immediately set out to reverse recent sales trends, address supply chain and inventory issues, while trying to improve the firm's balance sheet. No word on whether or not all of the stores will be permitted to use their air conditioning this summer.

In addition, current manager of health, beauty and consumables Mara Sirhal will replace Joe Hartsig as Chief Merchandising Officer. How involved Ryan Cohen is, I have no idea. Readers may recall that the current CEO of GameStop (GME) and founder of Chewy (CHWY) had acquired what was earlier this year, a 10% stake in BBBY, and came out swinging, calling for broad changes in management and in what management had been paid.

The firm also hired Berkeley Research Group to look at its inventory and the balance sheet. Funny, we're about to do that for free. Oh, the firm also hired Russell Reynolds to help in the search for a permanent CEO. Sue Gove is probably thrilled. Not joking.

I am actually surprised. I don't think that too many firms beaten to a pulp the way Bed Bath & Beyond has, and in the midst of a changing environment, would actually try to guide. Credit to whoever put in this effort.

For the full fiscal year, BBBY sees sales recovering in the second half of the fiscal year (current quarter is FQ2) versus the first half, driven by inventory optimization plans, including clearance activity. The firm sees adjusted SG&A expense for the fiscal year below the year prior, reflecting aggressive actions taken to align cost structure to sales. Cap Ex is expected to drop from $400M to $300M.

Bed Bath & Beyond ended the quarter with a net cash position of $107.5M, down from $439.5M three months earlier and $1.127B one year ago. Current assets are down to $2.057B, including $1.759B in inventories. (Uh Oh) Current liabilities amount to $2.026B, bringing the firm's current ratio to 1.01, which would be the bare minimum for a passing grade. That said, in the firm's own guidance, they tell investors that inventories are a problem. In fact, the firm has even hired someone to help with that.

We do not always do a quick ratio for retailers. Given the probability that the inventories on the book valued at $1.759B are able to be sold at anything close to that number is likely rather thin. This firm's quick ratio comes to an incredible 0.14. That is unacceptable.

The firm has $4.949B in total assets on the books. Thankfully there are no intangible assets listed. I did not want to lose my mind while writing this. Total liabilities less equity adds up to $5.169B, including $1.379B worth of long-term debt and $1.561B worth of operating leases. The firm has $325M worth of credit and gift card liabilities on the books as well. That seems inconsequential at first, until you realize that it's more than three times the cash position. Obviously, this balance sheet does not pass muster. 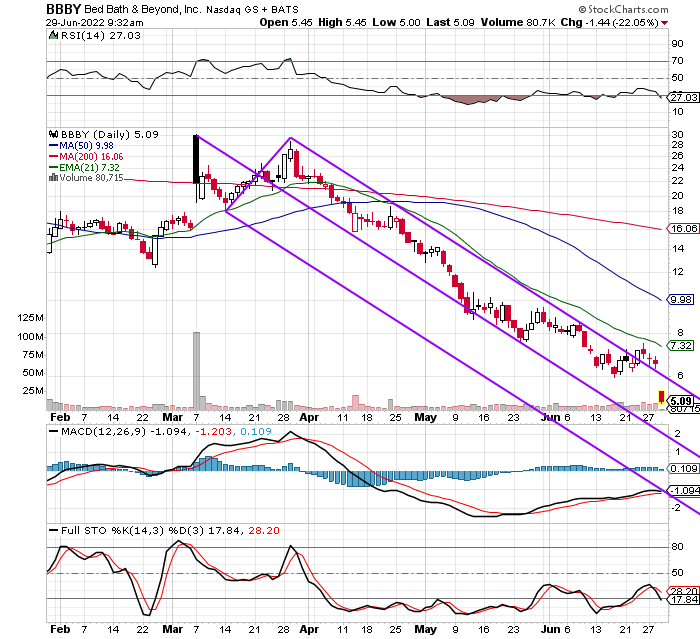 ... For Anything Other Than Trading

Readers will see that the horrendous downtrend from a high of $30.06 in March has reasserted itself in the wake of these earnings. The stock is technically oversold on all fronts because that is what the fundamentals demand. This stock can probably be day-traded.

If an investor was willing to wait and see what Sue Gove does with this firm, or who would be willing to take over for her after an executive search, that investor could buy stock here just above $5 and sell BBBY January $15 calls for about a buck. That way, the risk exposure is reduced to just about $4. Nothing wrong with that, just acknowledge it for what it is... gambling.

Get an email alert each time I write an article for Real Money. Click the "+Follow" next to my byline to this article.
TAGS: Economy | Investing | Stocks | Technical Analysis | Trading | Retail