Friday night Jim Cramer reminded his viewers on Mad Money that Bed Bath & Beyond (BBBY) would be reporting earnings on Thursday, but he said this turnaround story has yet to gain any real momentum and the stock is heavily shorted.  Indeed, the web site www.shortsqueeze.com reports that the latest data showed 72,560,000 shares shorted versus 69,350,000 in the prior monthly report.

Let's check out the charts of BBBY.
In this daily Japanese candlestick chart of BBBY, below, we can see that prices made their pandemic low later than the broad market. BBBY made its low in early April and we can see a retest later in the month before prices begin a rally. BBBY has filled a downside gap from February but more resistance lies ahead in the $15-$18 area from December and January.
The slope of the 50-day moving average line is positive but the 200-day moving average line is still negative.
The On-Balance-Volume (OBV) line shows a bottom in April and a rise into September. No bearish divergence here.
The Moving Average Convergence Divergence (MACD) oscillator has stayed above the zero line since late May and is currently pointed upwards.

In this weekly chart of BBBY, below, we again used candlestick charts. We are not done with the week but right now we can see a doji pattern which could be a top reversal pattern.
The 40-week moving average line still has a negative slope and is below the price action. The MACD oscillator is in a bullish alignment above the zero line.

In this daily Point and Figure chart of BBBY, below, we can see that prices met a price target in the $15 area. Prices could move higher but this could be a factor for technically oriented traders to take profits or even short the stock. 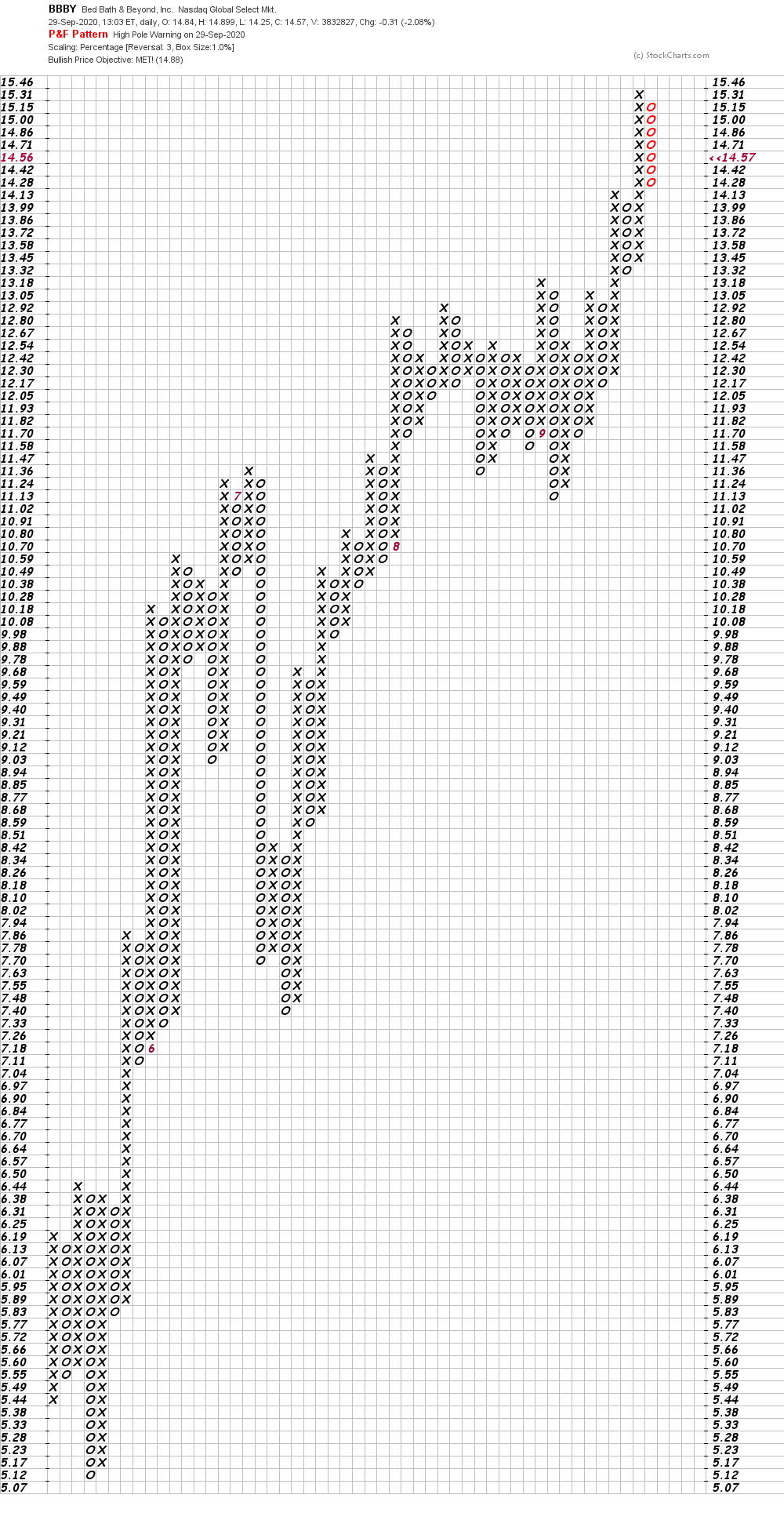 In this weekly Point and Figure chart of BBBY, below, we can see a potential upside price target in the $23 area.

Bottom line strategy: The thing about shorts is that they can be right or wrong. A heavily shorted stock, relative to its five-year history that shows superior relative strength could be a potential short squeeze -- does not necessarily mean that the shorts will be forced to cover shorts if the stock rallies further. A high short interest relative to the float is not a good technical indicator by the way. The trend of prices for BBBY is up and I would not recommend shorting the stock ahead of earnings on Thursday.
Get an email alert each time I write an article for Real Money. Click the "+Follow" next to my byline to this article.
TAGS: Investing | Stocks | Technical Analysis | Trading | Household Products | Retail | E-Commerce | Mad Money | Earnings Preview