As a trader, I used to have a love/hate relationship with Oracle (ORCL) . Finally, I gave up on them a long while ago. A "Software King", Oracle somehow never made the transition to "Cloud King." Oh, there have been fits and starts. Good quarters followed by disappointing quarters, several disappointing quarters. Now, suddenly is there a rainbow at the other end of this storm? Is Oracle actually starting to perform? It sure looks better than it did.

The firm went to the tape last night with their fiscal second quarter results. The firm beat consensus EPS expectations by two cents. Oracle also beat industry projections for revenue as well, although that revenue printed in slight contraction from the year prior. Now, this next part, the segment breakdown is one of two reasons why these results were so well received on Monday night. Broken down, both the Hardware and services segments actually missed what the street was looking for. The firm's other two segments did not. Cloud Services and License Support is the firm's largest and considered by the industry to be the most important part of this firm. That segment passed muster, just edging expectations. The last segment, Cloud and On-Premise License, also beat.

Lastly, and the second reason why overnight traders jumped on board, was guidance. The firm guided the current quarter toward EPS of $0.86 to $0.88 versus projections of $0.84. There is one significant caveat. The firm expects the strong dollar to impose as much as a -4% impact total revenue going forward. That said, the firm does expect revenue to accelerate over the next two quarters. 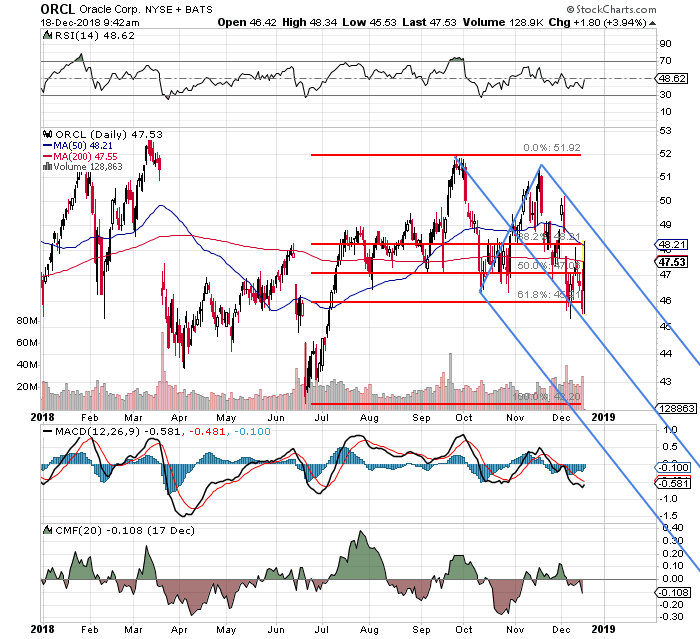 Oracle plods along pretty much in the middle of it's 2018 range. That makes the name something of an out-performer in this environment. Although support showed it's face nearly where the Fibonacci model overlaid over the past six month would suggest, the Pitchfork also suggests that resistance likely hot this name right around the 50 day SMA, currently 48.21.

Speaking just for me, do whatever you want, I would be real slow to jump on this bandwagon this morning. I mean, the Fed will have the ability to sink or lift all boats within 24 hours, thus greatly impacting all short term analysis, but my bias would be toward a reversion back toward the central trend-line. Oracle will have to post more than one positive cloud-based quarter to impress this kid.

Get an email alert each time I write an article for Real Money. Click the "+Follow" next to my byline to this article.
TAGS: Earnings | Economy | Investing | Markets | Stocks | Technical Analysis | Trading | Software & Services | Stock of the Day