As part of Jim Cramer's game plan for this week he told viewers of Mad Money Friday night that the earnings keep on coming Wednesday with Dave & Buster's (PLAY) .

It has been a while since we looked at the charts of PLAY. It was way back on April 22 and we did not recommend the long side. We wrote that "While it might be nice to look forward to an evening of games and bar food, the reality of our new normal may mean this becomes a rare luxury. Avoid the long side of PLAY."
The price of PLAY moved sideways into October and began a rally in November. Let's check out the charts to see what we missed.
In this updated daily bar chart of PLAY, below, we can see that the price of PLAY has tripled since October. A bullish golden cross of the 50-day and 200-day moving averages can be seen in November. Prices are trading above the rising 50-day and the rising 200-day averages.
The On-Balance-Volume (OBV) line turned up from early November but the line has struggled to move higher the past two months and trading volume has been declining since the middle of December. This is not what old-time chart watchers want to see.
The Moving Average Convergence Divergence (MACD) oscillator has been flat from early December and thus has been a bearish divergence when compared to the rising price pattern since December.

In this weekly Japanese candlestick chart of PLAY, below, we can see that the most recent candle could be a high wave candle/top reversal. A bearish candle this week would be confirmation.
The weekly OBV line has made some unusual moves over the past year. I am not sure how to interpret it. The weekly MACD oscillator is bullish.

In this daily Point and Figure chart of PLAY, below, we can see a potential upside price target of $70 but also that a trade at $41.81 will probably turn the chart bearish. 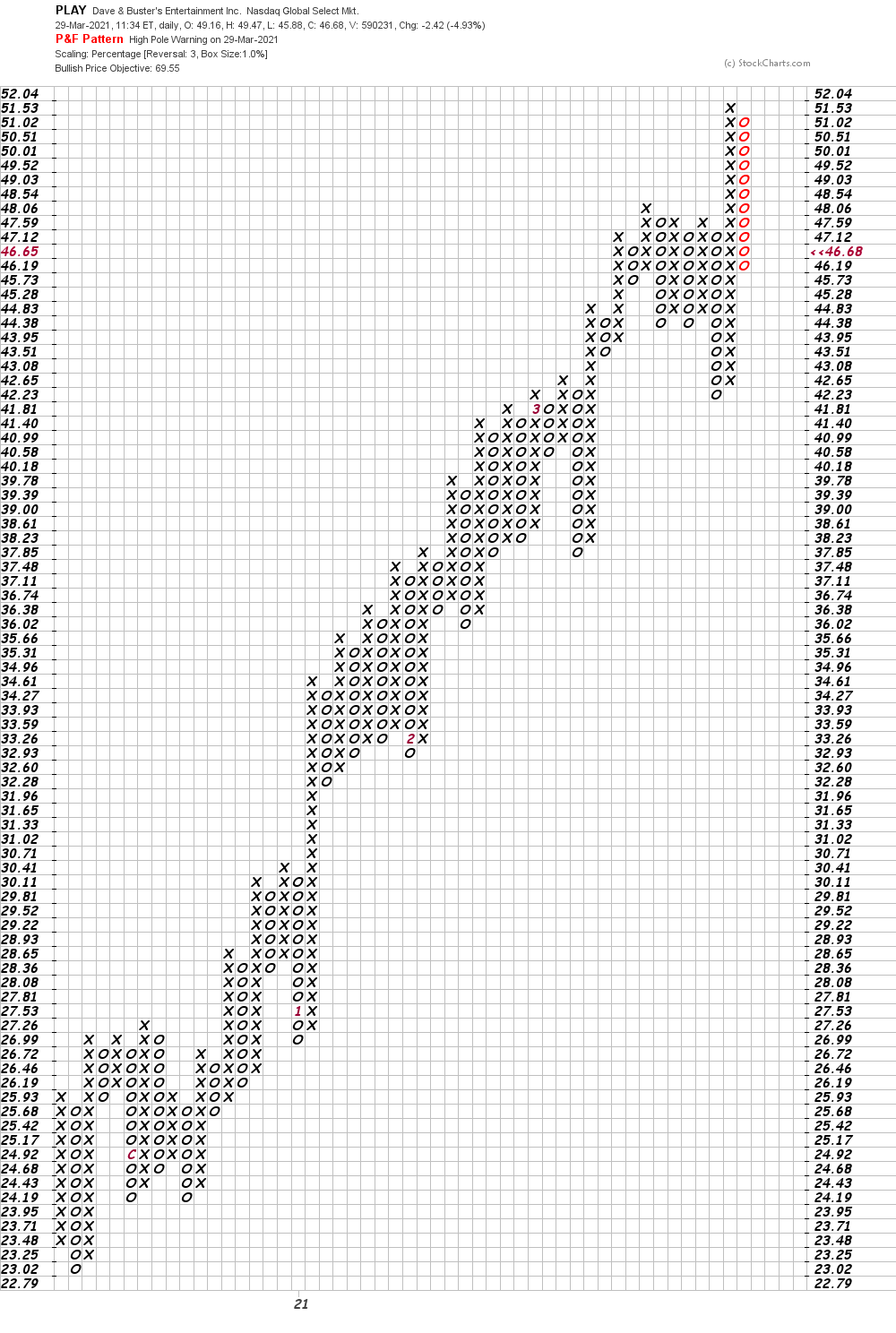 In this weekly Point and Figure chart of PLAY, below, we see that prices met and exceeded a price target of $33. Odd that the chart is not projecting a higher target.

Bottom line strategy: I am not exactly sure what is "off" with the charts of PLAY but my advice is to stand aside ahead of earnings on Wednesday.
Get an email alert each time I write an article for Real Money. Click the "+Follow" next to my byline to this article.
TAGS: Investing | Stocks | Technical Analysis | Trading | Food & Drink | Mad Money | Sports | eSports | Earnings Preview