Zero-dark thirty. Or so. Shaking my head slowly in thought. The blackened office window before me will really act as nothing more than a mirror until hints of daylight start to reach around the building across the street. Not yet, as the last echoes of Tuesday breathe their last gasp, as the fingers of late night lose their grip on the present, slipping silently into the past. Unnoticed. A much older man than I recognize looks back from that window.

Zero-dark thirty-one. Enough time wasted. I have thought hard on not just markets, but the economic complexities faced by a nation. I have tried to warn in the hope that policy makers might read, and understand. Some of them do. Understand. The arrogance of pretending that yield curves no longer matter has come home to roost. The entire planet goes through an extended spate of contraction in manufacturing. This now includes the United States. Blame the trade war? If you want. The facts, from the view of a real world market economist, remains that the spread between the yields paid by the US three month T-Bill and the US 10 Year Note, have for all intents and purposes, remained negative (or inverted) since May.

What did policy makers (The FOMC) think would happen if short-term rates were left awkwardly out of sync (too high) relative to the environment? What did they think would happen if they aggressively destroyed currency that they had just a few years earlier aggressively created, and did so before an economy that has never stopped struggling in certain pockets could really hit stride. It wasn't hard to understand.

Half a pound of tupenny rice

Half a pound of treacle

That's the way the money goes

Pressure on the longer end

That's the way the money goes

We told them. For months.

About the September ISM Manufacturing Survey

I received a few questions on the ISM survey in the wake of Tuesday's release. I'm going to answer a few remedial questions. If this is child's play for you, forgive, for most people do something else occupationally. They are concerned, and they have a right to better understand the macro that hits them square in the teeth.

Gang, you already saw the headline number, what we used to call the PMI (Purchasing Managers' Index, not Private Mortgage Insurance, and not Primary Marksmanship Instructor). That number is an overview, in this case of the state of manufacturing in general across the nation. There are a number of sub-components that economists and traders also watch closely. Often, you will read that a 50 reading is the dividing line between expansion and contraction. That is true, but can also be confusing for newcomers. Why? Simple. because a reading below 50 is contraction from the prior month, a higher number in month two from month one that is still below 50 is worse, not better. ( I hear professionals screw that up, so you are not alone.) It would just mean that the pace of contraction has slowed. Understand?

On Tuesday, the ISM (Institute For Supply Management) put a headline print of 47.8 to the tape for September, on the heels of a 49.1 tag for August. Even if September had printed at say... 49.6, that still means that manufacturing activity had slowed in September from August.

Another question that I have heard is this... "Sarge, it's just 12% to 13% of the economy, how important can it be?" Okay, gang... one must understand that when any corner of the economy descends into a "mini-recession" that there is a multiplier effect. Let's put it this way... You take a pay cut at work. You start mowing your own lawn. You pretend that you can't see the "check engine" light. Plans to replace the aging windows in your home are delayed. The holidays get downsized for the kids.

Well, on a grander scale, it goes like this... New Orders for manufactured goods contract. Orders for raw material slow. Inventory building stops. There is less cargo to move over the rails, and on the roads. Hours are cut at the factory, then headcount. This bleeds into both the already mentioned transports, as well as suppliers. Now, you get it. Even if it's not you... those guys start mowing their own lawns, delaying auto repairs and home improvements. Those guys downsize the holidays for the kids. The effect is that upward pressure on wages suffer, and the entire business cycle struggles.

One last item. The strike at General Motors (GM) , the ongoing grounding of Boeing's (BA) once popular 737-Maxx aircraft, and the ongoing conflict with China over trade might be somewhat self-inflicted, and may or may not be to a variable degree... correctable. These items were seen as necessary by one side or another. That does not make them less real. They still count. They are all part of the environment, that policy makers must (but did not) adapt to.

A couple of hours after the ISM report made news, the Atlanta Fed's GDPNow model estimate for Q3 GDP (SAAR) was revised downward to 1.8% from 2.1%. This can be directly attributed to that September ISM manufacturing print as well as the Census Bureau's data for August construction spending (that also disappointed).

In response to this data, the Atlanta Fed was forced to reduce their now-cast estimates for third quarter "real personal consumption expenditures" slightly, and "real private fixed investment" quite aggressively. One positive takeaway from Tuesday... though yields broadly contracted across the entire curve, the back half (longer end) of the curve did maintain it's integrity. Don't look at the front half, the shorter end is still badly mangled, but the 2 year/10 year spread actually widened, which is healthier than if it had not.

The Future Of Banking

According to a 225 page research report published by analysts at Wells Fargo (WFC) this week, the future will be one of perhaps much improved efficiency as advances in technology refine operations in back offices, call centers, and local branches. The downside? As automation takes over basic banking functions across several levels, U.S. banks might reduce aggregate headcount by as much as 200K positions.

The report mentions mortgage processing costs likely to decrease, as consumer (and community) marketing becomes more surgical thanks to improvements in big data collection as well as in the applications of cloud computing and artificial intelligence. Is banking a place to be for investors? Eventually as costs are reduced, I think yes. However, even as large money center banks have enhanced profitability through a number of measures such as a changed landscape for fee based revenue generation, the market still applies valuation based on net interest margin, which has obviously been tough.

While I have been long some Wells Fargo in anticipation of the firm finally naming a new chief executive, and I am satisfied with the selection of Charles Scharf, financials as a whole... even at 12.2 times forward looking earnings are perhaps properly valued in this environment. The 12 handle is in line with the sector's five and 10 year averages. In other words, these shares are trading precisely where they have in terms of valuation ever since the economy rolled off of a cliff a decade ago, and the nation's central bank forever perverted the concept of what we used to call the "free market."

Cracks In The Pavement

The Wall Street Journal ran a story last (Tuesday) night explaining just how executives at several backers of Facebook's (FB) "sort-of" crypto-currency might be wavering in their support. On paper the idea sounded great, using a basket of real-world currencies as a measure used to tamp down exchange rate volatility, baked by a number of firms backing the project known as the Libra Association.

Included in that group would be financial firms that could help facilitate not just the function of this new concept as a medium for transaction, but also logical storage of value. Just a couple of things... The idea is under government scrutiny, both in the U.S. and abroad. Central banks don't seem too enthusiastic either. The article names Visa (V) and Mastercard (MA) as firms that had signed on as part of the group that would build and then maintain the necessary network, but at this point may be reconsidering.

Speaking just for me. even if Libra does come to pass, I will not likely be an early adopter. I was probably the last guy in New York to use the internet, and if I was not the last member of the NYSE trading with pen and pad, I really don't know who was. I do look at charts though, and sometimes I'm pretty good at it. Some of you are long Facebook. Take a look at this. 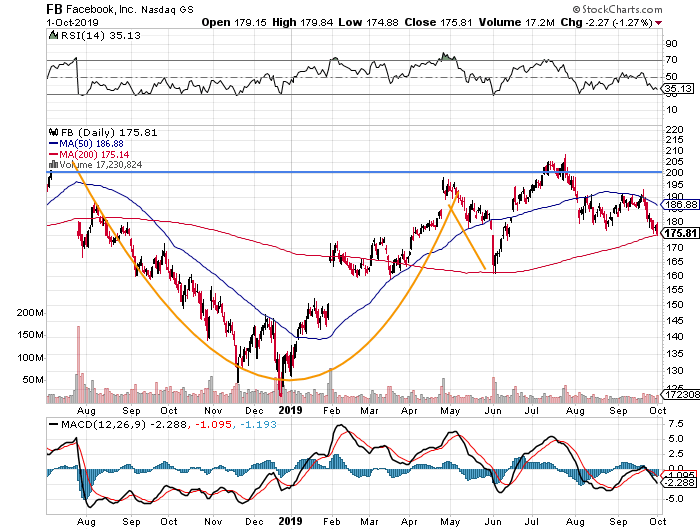 This is an updated version of a chart that I drew up for you a while back. One sees the breakout of the huge cup with handle pattern that eventually failed. If you are long this name, I am sure that you are familiar with those moves. What the retail investor who is long this name, but does something besides look at charts during the productive hours of their day, might have missed is just how fast this name has crept up (down really) on it's 200 day SMA.

Now, not always, but often enough, simple moving averages, in particular the 50 day and the 200 day can provoke actions to be taken when they are either tested or broken. Facebook shares closed just 67 cents above that crucial line on Tuesday. Just a warning... a break of this level can create an algorithmic response that will force risk managers to pressure portfolio managers to adjust exposure.

At 18 times forward looking earnings, this stock is not expensive, and fundamentally, as long as advertisers are interested, their game is intact. That said, regulatory pressures are not likely to abate anytime soon. Facebook reports on October 30th. Should the market hand down a discount, there could be a November 1st bull call spread with my name on it out there.

(Facebook and Mastercard are holdings in Jim Cramer's Action Alerts PLUS member club. Want to be alerted before Jim Cramer buys or sells FB or MA? Learn more now.)

Get an email alert each time I write an article for Real Money. Click the "+Follow" next to my byline to this article.
TAGS: Economic Data | Federal Reserve | Investing | Markets | Stocks | Technical Analysis | Trading | Banking | Media | Cryptocurrency

Intuitive Surgical Is Rallying Ahead of Earnings

When You Press the Buy Button, You Own the Trade

Making an investment is your choice, so be careful who you follow -- and who you blame.

Southern Copper Corp. Has Some Shine

A subscriber asks about the charts of SCCO, and here's how to approach it.