On Monday morning, the nation's second largest bank released the firm's first quarter financial results. Those results appear to be somewhat better than some had expected after seeing several competitors report last week. For the period ended March 31st, Bank of America (BAC) posted GAAP EPS of $0.80 (net income of $7.1M), which was down (-7%) from $0.86 for the year ago period, but did beat Wall Street by about six cents. This came on revenue generation of $23.2B. That line was good enough for year over year growth of 1.7%, and also bested Wall Street's expectations.

Net interest income increased by $1.4B to $11.6B (+13%), driven by deposit growth, loan growth and higher long end interest rates. Non-interest income, unfortunately decreased 8% to $11.7B, driven by reduced investment banking revenue. Average deposits increased 13% to $2T, while average loan and lease balances increased 8% to $978B, and average global liquidity sources increased 11% to $1.1T. BAC posted a provision of just $30M for credit losses. Between $400M and $500M had been expected by Wall Street. The bank also released a net $362M in reserves, which is in stark contrast to JP Morgan's (JPM) $1.46B provision for credit losses, which included a $902M addition to its credit loss reserves.

The bank did say that it has no material direct exposure to Russia. The bank does have a rough $700M in lending and counterparty exposure. All of those loans have been downgraded and reported with increased allowance coverage made during the quarter.

Readers most likely know that I am currently long two banks, Wells Fargo (WFC) which did not have a great quarter overall, and Bank of America, which posted a quarter that I am satisfied with. The reason that I chose these two banks above the others is simple. They both do more domestic business than do some of their competitors and that is a positive in 2022. They both also rely more heavily on traditional banking means as a way of doing business (though certainly not entirely in BAC's case) than does much of the competition. That places more emphasis on the ability to drive net interest income at a time where longer-term interest rates are rising and the environment appears less attractive for businesses that drive non-interest income such as investment banking and trading. 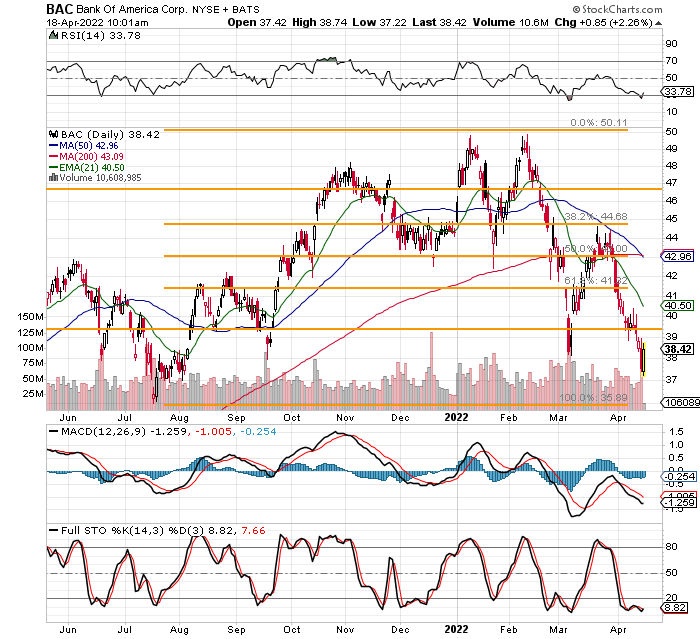 I have placed a Fibonacci retracement model upon BAC's performance dating back to the lows of last July. Even though most models do not include the 23.6% and 78.6% retracement levels, I have drawn them in for you at $46.90 and $39.42, respectively. Readers can see here that BAC has retraced nearly 100% of the July 2021 through February 2022 rally.

Though this release was solid and I continue to like this name, I would not be surprised to see these shares complete the 100% round trip. I will be a buyer down to $36.50. Then, we'll take a look. Don't forget BAC does pay shareholders $0.84 per share annually, in quarterly installments. That's good for a yield of 2.24%.

Get an email alert each time I write an article for Real Money. Click the "+Follow" next to my byline to this article.
TAGS: Earnings | Investing | Markets | Stocks | Technical Analysis | Trading | Banking | Financial Services