Bank of America (BAC) reported the firm's fourth quarter financial performance on Wednesday morning. The firm posted GAAP EPS of $0.82, which was good for annual growth of 29%, and beat Wall Street. The firm also generated $22.06B in revenue for the three month period, up 9.8% year over year (a second straight quarter of growth), but a very slight miss for Wall Street.

Net interest income increased 11% to $11.4B driven by strong deposit growth and investment of excess liquidity. Non-interest income increased 8% to $10.7B, driven by record asset management fees and record investment banking revenue. Non-interest expense increased 6% to $14.7B, largely driven by higher revenue-related incentive compensation (pay/bonuses), and partially offset by lower Covid related costs. Just an FYI, the 6% increase in compensation compares well with the 11% rise at JPMorgan (JPM) , and the 23% increase at Goldman Sachs (GS) . Note: I came into earnings season long BAC and JPM, I added to JPM on the selloff, and I initiated a long position in GS on Tuesday. Wells Fargo (WFC) remains my top banking pick in this environment. I am now long all four of these names.

Average loan and lease balances for the quarter increased $10B to $945B, while period ending balances increased $51B to $979B, led by strong commercial loan growth as well as higher credit card balances. Average deposits popped 16% to $2T (with a T), while average global liquidity sources increased 23% to $1.2T.

Provisions for credit card losses improved $542M to a benefit of $489M driven by asset quality and macroeconomic improvements, but partially offset by loan growth. The quarter also included a net reserve release of $851M. Bank of America ended the quarter/year with a tangible book value of $21.68. At the last sale I saw of $47.37, BAC now trades at 2.18 times tangible book. The firm's efficiency ratio is down to 53% from 58% a year ago. (Lower is better. Efficiency Ratio = expenses/revenue.) 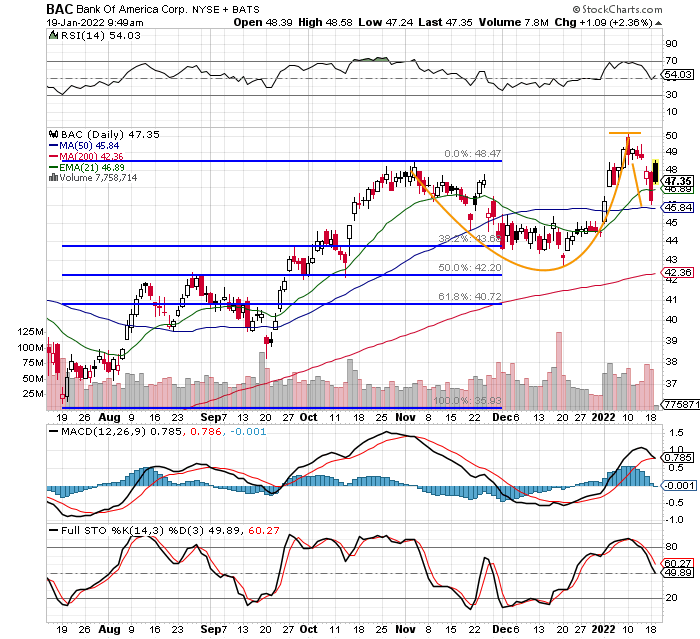 Readers will note that after BAC found rough support just below a 38.2% Fibonacci retracement of the July through early November rally, the shares then developed a cup that has no tacked on handle. This moves the pivot from the left side of said cup to the right. In building that handle, BAC filled the New Year's gap, and in rallying this morning, BAC is working on filling the gap created last week. All three of my most focused upon indicators are technically neutral, while it appears that at the depth of the handle creation this stock used the 50 day SMA for short-term support.