Much of this occupation, in terms of success...(honestly, much of life itself) is based upon the successful interpretation (or lack thereof) of probabilities through the analysis of statistics and thus resultant pattern recognition. The ability to conduct a thorough fundamental analysis of any given corporation is paramount in my opinion to laying the groundwork for any in depth understanding of where a business has been, and might offer the most basic clues as to where that business might go.

There can be no doubt, however that over time, as the process of price discovery has become ever more and is now close to completely automated, that technical analysis, which in its broadest definition could be described most basically as pure pattern recognition has almost completely dominated short to medium term trading. Algorithms can read charts. I have always liked to say that fundamental analysis is how investors determine which way the bus is going, while technical analysis is how traders decide where the bus stops are.

One thing has become increasingly more clear over time, as humans have ceded the point of sale to high speed algorithms, the flow of capital remains the single most important factor in determining trend even if price in the short term is still determined by supply and demand in real time, even if in the electronic age that supply and demand is sliced and diced into fragments of data as to thin out the depth of order books making block trading (or the pricing of chunky merchandise) difficult, not to mention the unfortunate and quite intentional demise of transparency in financial markets.

Three facts have remained true through the ages, as if untouched by time, and what passes for progress. First... Three strikes and you're out. Secondly... Four balls and you take your base. Finally... Earnings growth remains reliant upon economic growth that itself stands upon two legs. Those two legs must work together, imbalances are created when one leg carries more weight than the other. Are we there? Or getting there? I'll let you decide. The one leg is policy, both monetary and fiscal. Fiscal policy is already expansive and still expanding. Monetary policy, at least in this country, has a dual (but really a triple) mandate. The central bank's stated mission is to ensure price stability, while striving for maximum sustainable employment. The third, unofficial mandate has unfortunately through both the irresponsible political pressures of past decades as well as the necessities of the present, become the financing of the federal government at low or artificially created price points. In other words, the monetization of debt coupled with the hope that newly created fiat remains mostly confined to reserves.

The way that the second leg is built has never and will never change, at least not in a capitalist or a less managed economy. That leg consists of ease of commerce that leads to measurable velocity of money (speed of transaction), or supply versus demand in a series of isolated times and places to later be interpreted as a less isolated whole. This is the ultimate driver of all things from labor market health to public sentiment and that is what places expectations on the future. We refer to these expectations as valuation. Obviously, the first leg has a lot to do with the strength of the components that make up the second leg.

Bubbles? I don't really believe in bubbles. Everything is priced where it is for a reason based upon the financial or economic environment. Of course artificial pricing here causes higher valuation there. A bubble? Or a correct valuation given that the entire process has been corrupted, even if for good intention. Hmm? We have all seen the well trained, well conditioned athlete that pops a hamstring while running at a pace that few could. Yet, an elderly man with a limp could beat that athlete in almost any physical contest for probably a month or two (maybe three) after the injury. Just some food for thought.

Several patterns have become visible across financial markets over recent weeks. Yes, the obvious two would be rather poor equity market internals built on absolutely anemic aggregate trading volumes. Let's hope this starts to change as JP Morgan (JPM) , Goldman Sachs (GS) , and Wells Fargo (WFC) hit us with their quarterly digits this morning. Another pattern that we have seen over the past three or four sessions is a late day surge in equity prices after a weak opening.

There always seems to be a reason. On Tuesday, the Bureau of Labor Statistics put March consumer prices to the tape and while they were indeed inflationary, they did not print at unexpectedly high levels, which was an underlying fear. Nor are consumer prices even close to keeping pace with producer prices, which means that somebody somewhere is probably experiencing some severe margin compression. While food prices were hot in March, most of the real heat came from energy and energy adjacent sectors of the economy. These groups may show far less price acceleration for April. Interestingly, industries that had already long ago surrendered any pricing power over clientele (such as apparel and transportation services) continued to see not disinflation, but outright deflation. Jerome Powell's "transitory" expectations for forward looking inflation may or may nor be correct, but is certainly not without merit.

The April-long rotation away from the value and reopening trades and back into growth continued in earnest on Tuesday. Readers will note that the Nasdaq Composite has just experienced a "mini" or faux golden cross as the 21 day EMA crosses over the 50 day SMA to the upside... 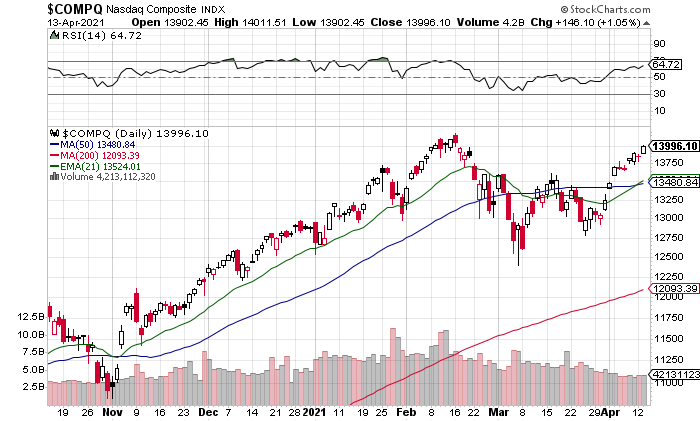 ... and as relative strength approaches (but is not quite there just yet) a technically overbought condition. The Nasdaq Composite can at this point hardly be referred to as a 2021 laggard, closing on Tuesday afternoon at a 3.8% premium to that 50 day line. For comparison's sake, the S&P 500 closed at a 5.4% premium to its 50 day SMA. The much hyped small-cap Russell 2000 closed at a slight discount to both the 21 day EMA and 50 day SMA for that index.

Extremely interestingly, or at least I thought so... the Technology Sector Select SPDR ETF (XLK) gained almost a full percent on Tuesday despite the Philadelphia Semiconductor Index closing in the red for the day. Both hardware. Led by Roku (ROKU) and Apple (AAPL) , and software led by the cybersecurity names and Palantir (PLTR) carried the sector.

Perhaps the most interesting result of an inflationary but not frightening CPI was visible in U.S. Treasury security markets. Not only did investors plow back into the long end of the maturity curve, they snapped up the $24 billion Thirty Year Bond auction as well. At a high yield of 2.32%, bid to cover landed at 2.44, well above the 2.28 times issuance that we saw for last month's similar auction. In addition, foreign accounts aka Indirect Bidders took down a very healthy 61% of the allocation. Apparently, global opinion would be that a nominal 2.32% over 30 years from a trusted source is a nice return.

1) While the Johnson & Johnson (JNJ) COVID jab was at least temporarily sidelined in the US, Pfizer (PFE) CEO Albert Bourla was busy tweeting out that his company could produce and deliver 10% more doses to the U.S. by the end of May than already promised. This is 20 million extra doses, or enough to fully vaccinate 10 million extra individuals. At the same time, Moderna (MRNA) was busy showing interim Phase 3 COVE data that showed enduring efficacy of that shot six months after the jab, a level of lasting efficacy already shown by the Pfizer shot. Moderna also revealed preclinical studies that demonstrate the ability of a potential booster shot to neutralize all known variants of COVID-19. While some folks across our nation have shown hesitancy in regards to messenger RNA technology, it is becoming increasingly apparent at least to me that this technology due to its adaptability and ease of replication may just be what saves us all. Once the scourge of COVID is finally defeated, what will be accomplished through messenger RNA technology? What other diseases might be targeted? How many decades might be added to average human life spans? This may just be the tip of the iceberg.

2) Coinbase (COIN) will open today (Wednesday) at the Nasdaq market site. The shares were given a reference price of $250 last night. At this reference price, the company would be valued at $65.3 billion on a fully diluted basis. Where does it open, and where will it trade after it does? Educated guesses are up to twice reference price. Am I brave enough to take a position on either side of this name? Sure, but only for trading purposes. I will not be long or short this name overnight anytime soon. I have to determine what the nature of this beast is first.

3) The president has announced that the last U.S. forces (numbering only a rough 2,500 individuals) will leave Afghanistan by September 11th, which will be the twentieth anniversary of that awful day. Great. About time. I have two questions. 1) Why tell the bad guys when we're leaving? 2) Now that we have already screwed that up, why not misinform the global public concerning our intentions? Speak publicly about reinforcing places on this earth that we have no intention of reinforcing. C'mon, man... force those who oppose us to waste their resources unnecessarily. We are not supposed to be the amateurs here. Now, focus. Get your head in the game.

(Wells Fargo and Apple are holdings in Jim Cramer's Action Alerts PLUS member club. Want to be alerted before Jim Cramer buys or sells WFC or AAPL? Learn more now.)

Get an email alert each time I write an article for Real Money. Click the "+Follow" next to my byline to this article.
TAGS: Earnings | Economic Data | Investing | Markets | Stocks | Technical Analysis | Trading | Treasury Bonds | Banking | Coronavirus