The cold air. Late Monday night, or is it early Tuesday morning. We wait. Wait for President Trump's address from Davos, Switzerland. Anything to pump some life into the (very) tired World Economic Forum. There has been less "Davos" talk on Wall Street this year than any year that I can remember. In fact, outside of the members of the media, I don't think any single market participant has even mentioned Davos in conversation. One thing we do know for sure is that the annual Winter "get together" of the world's economic, business, and intellectual "elite" (Well, lah-di-dah) is that U.S. equities would probably like to sell off a little bit. As both Asian and European equity markets have done so far this week, domestic equity index futures have traded lower throughput the zero-dark hours.

Small wonder, given just how momentous the recent action has been. Last week alone, the Nasdaq Composite ran 2.3%, the S&P 500 a mere 2%, breaking the markets down just a little further, year to date... both the Technology Select Sector SPDR ETF (XLK) , and the Communications Services Select Sector SPDR ETF (XLC) ended the Friday session within a whisker of being up 6% year to date on January 17th, just 12 trading days into the new year.

Now doubt that our marketplace has experienced/is experiencing a powerful run. The drivers have been many... improved trade relations between the U.S and China, the U.S. and the rest of North America, maybe even the U.S. and Europe, a resilient U.S. economy, probably rampant short covering across the more dangerous names, and of course that liquidity machine also known as the Federal Reserve, not mocking here, no... not in the least.

The danger here, however, is the perception of a need that will never truly diminish. I have mentioned in my morning notes for quite some time the threat to markets posed by a "taper tantrum" type response to any mention made by FOMC membership in regards to letting the balance sheet rest for a bit. The size of that balance sheet, released by the central bank every Thursday, increased in size by a rough $26 billion in total assets last week, to leave the headline total at $4.176 trillion, the largest the balance sheet has been since early October 2018. Where do Jerome and the gang become uncomfortable? The balance sheet stood at or close to its all-time peak of $4.5 trillion as late as 2015. I think we know, just based on the behavior of this Federal Reserve, that all things being equal a more normalized balance sheet is preferable. It's really all about the perception of short-term liquidity for this crew. Once satisfied that the size of the balance sheet will not be an issue for the ability of the marketplace to function, the Fed will no longer feel the need to purchase short-term Treasury debt at the pace of the recent past. This action has thus far anchored the short end of the yield curve. Once that anchor is released, the U.S. Treasury will then be forced to shift issuance to the longer end of the curve simply in an attempt to both preserve the slope of said curve, as much as to push out debt repayment.

The slope, I feel, is far more important to maintain expectations for overall economic growth than most realize even if this will produce inflation at the consumer level. This is where the public test of political willpower will arise. This is where fiscal policy that suddenly becomes far more expensive to service suddenly matters. To us commoners, especially. 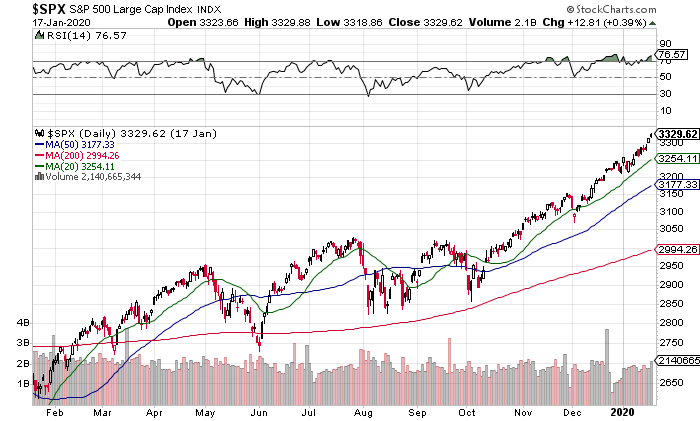 Does the fact that I have been a fairly consistent voice of caution in recent weeks as these markets have run as aggressively as they have mean that I have changed the way I invest or trade? Certainly, I do remain overwhelmingly net long. I stopped selling almost anything short quite a ways back... just too dangerous in a market that remains in a confirmed uptrend with very little evidence of institutional distribution. While covering shorts at the very least of profits has become very stressful work, I have also noticed myself adding far less to my winners in this environment as well. Less than I would in a more "normal" environment. Probably like many of you, I just have an aversion to adding at the top of the chart, as well as at prices so very far above net basis. How much of a problem will that be at the institutional level? I mean once some air is let out of the balloon, just what discount will the buy side demand before committing to establishing support?

But Sarge, why doesn't Treasury keep issuing short-term debt in size and have the Fed just buy it all up? Loose monetary policy and loose fiscal policy forever. Easy Peasy? Seems that way. Modern Monetary Theory. Helicopter Money. We used to call the whole shebang... "the Debt Super-Cycle." Don't hear that term as much these days. In aggregate... we have chosen to "dumb down" a tad. All good, though. Until it's not. Until the good folks of a developed nation lose faith in their fiat currency. What then? Oh, boy. What if it's the U.S.? Don't even say that. You do understand that all bills eventually come due? You do understand that all consumption brought forward through looser than responsible policy is just that... "brought froward" from a finite future, right? I love the beach, I mean I really, really love the beach. Unfortunately, it can't always be summer. Not in real life.

Of course, for many, the main event will be the president's address this morning, even as the impeachment trial in the U.S. Senate gets under way on Tuesday in Washington. After President Trump gets the show on the road, "this Davos" will be more about tackling climate concerns and challenges posed to the environment than it will be about globalists arguing their case versus nationalists.

After BlackRock (BLK) CEO Larry Fink's annual letter last week, and then the comments made publicly by Microsoft (MSFT) CEO Satya Nadella, I think we can likely expect ESG (Environmental, Social, and Governance) style investing and how that incorporates into the current potential for global economic growth, as well as how accretive this concept might be toward longer-term growth to be a central theme, even at the possible cost of short-term profitability.

By the way, Chinese Vice Premier Han Zheng will also speak on Tuesday.

Ahead of the opening of this forum in Davos, the IMF (International Monetary Fund) reduced the organization's forecast for global economic growth for this year (2020) to 3.3% from 3.4%, and for 2021 from 3.6% to 3.4%. Even with this reduction in estimates, this still illustrates an acceleration of growth off of the 2.9% expansion seen in 2019, the planet's most sluggish year since the economic crisis.

The credit for this growth, according to IMF Managing Director Kristina Georgieva, belongs to central bankers. Georgieva referred to the 71 interest rate cuts made by 49 different central banks in 2019, "the most synchronized monetary easing" since that crisis. Georgieva even floats the idea that a technical recession may have been likely without these moves.

This week, though short, will provide the first really meaty week of fourth quarter earnings releases. According to FactSet, the blended (9% reported/91% expected) earnings decline for the S&P 500 for the quarter has dropped to -2.1% year over year from -2.0% last week. This, while 12 month forward looking earnings for the S&P 500 have moved from 18.4 times to 18.6 times. Going to the next level, net profit margin for the S&P 500 for Q4 2019 is now expected to land in aggregate at 10.7%, down from 11.2% for Q4 2018. Broken down, margin growth year over year is expected to be far more prevalent across more defensive sectors than where I think investors would prefer to see it.

The highest profile name going to the tape with Q4 performance on Monday is Netflix (NFLX) , after the closing bell. More than actual EPS and revenue results, I would think that markets will focus on subscription growth outside of the U.S., as Disney (DIS) Plus as well as others have probably taken down some domestic market share. Free cash flow will be an issue, given just how aggressively the firm has spent on content.

This will be the issue that drives the conversation, and perhaps post-release commentary regarding perhaps exposing expected hit movies to box office sales prior to a streaming release, perhaps the introduction of selling advertising space on the streaming service, and maybe even discount pricing. Hey, but who am I? Ten shares have been far more resilient than I had ever thought that they would be in such a competitive environment where the competitors nearly all have an ability to fund a start-up business for at least a while through cash flow provided by already established business lines. 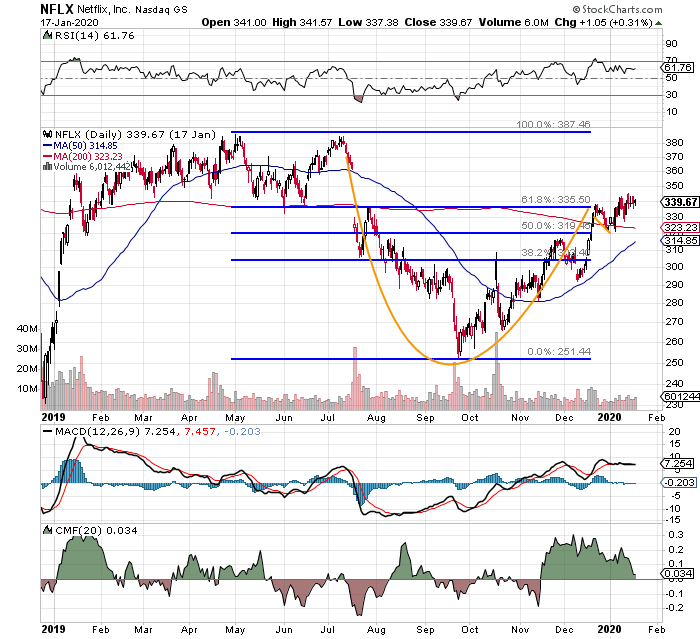 There are two ways to look at this Netflix chart. Either the shares have rallied to the 61.8% Fibonacci level at 335, and gone sideways ever since, or that whole movement covered by the selloff over the summer and Autumn recovery created a cup with handle pattern. Possibility A, would likely result in serious, and maybe determined resistance here. The second possibility would suggest a potential breakout even from this spot, with prices beyond $400.

From my perspective, the technical set-up conflicts somewhat with the fundamental back-drop. When that happens, I tend to back off, as I have in this case. When push comes to shove, I will side with fundamentals over technicals.

(Microsoft and Disney are holdings in Jim Cramer's Action Alerts PLUS member club. Want to be alerted before Jim Cramer buys or sells MSFT or DIS? Learn more now.)

Get an email alert each time I write an article for Real Money. Click the "+Follow" next to my byline to this article.
TAGS: Earnings | ETFs | Federal Reserve | Investing | Markets | Stocks | Technical Analysis | Trading | Movie Production | Movies