Between the events of Wednesday afternoon and then Thursday morning, Bristol-Myers Squibb (BMY) won twice. If only my beloved New York Mets could try accomplishing so daunting a task. Don't ask me about my Rangers. The good news started late Wednesday when reports started circulating that a court had found certain generic products manufactured by a number of firms had infringed upon patents related to the blood thinner, Eliquis. That was especially good news for both Bristol-Myers Squibb and Pfizer (PFE) , a collaborator that under a 2007 agreement were sharing profits/losses related to the drug on a 60/40 basis.

Why is this such a win? Eliquis was the company's best seller prior to the acquisition of Celgene (that title now belongs to Revlimid), so preservation of this drug that rang up $2.6 billion in sales over the past quarter is huge. Of course, the decision will be subject to appeal, but from reading several different sources it looks to me that this would push out generic competition for a number of years.

For the firm's second quarter, the firm reported adjusted EPS of $1.63, which was a solid beat. Revenue for the period landed at $10.13 billion, also a beat and good enough for year over year growth of 61.6%. Now, the adjustment to earnings is a bit complicated, but does make sense. I think. GAAP EPS printed at -$0.04. What? I know. Bear with me. The firm reported a net loss of $85 million when including expenses resulting from purchase price accounting, and contingent value fair rights, fair value adjustments. That's a mouthful. The firm also paid $1.7 billion in taxes on $1.6 billion in pre-tax earnings. This oddity was the result of an internal transfer of certain intangible assets as well as the Otezla divestiture. This effective tax rate of more than 100% compares to 19% for the same quarter last year. You now see why I added the phrase "I think".

For the quarter, both Revlimid and Eliquis experienced 6% growth over last year's comparative period. This is key because the Celgene deal is expected to be quite accretive to overall sales performance while greatly enhancing money saving synergies over a three year period, and because a number of BMY's other drugs saw year over year declines in sales as the pandemic has obviously had a negative impact on patients' non-Covid health care decisions.

The firm sees reason for optimism over the final half of the year. While full year revenue is now expected to land in the $40.5 billion to $42 billion range, which is a mild increase at the low end, the firm now sees full year adjusted EPS hitting the tape in between $6.10 and $6.25. That's up from $6.00 to $6.20. 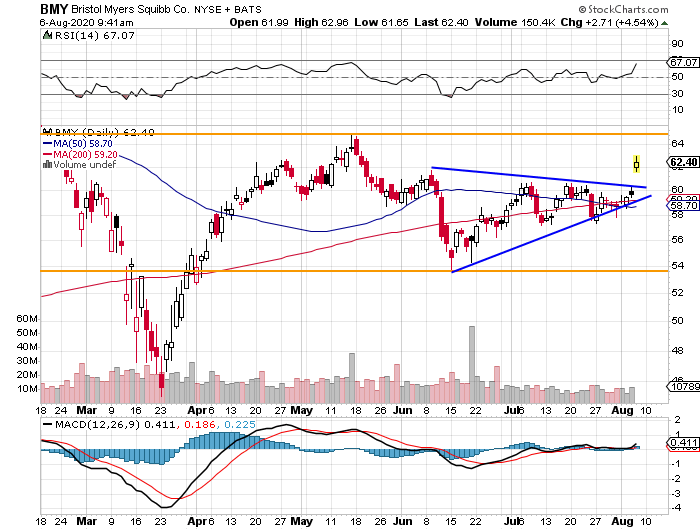 There are two formations at work here. We have the closing pennant (purple) that culminated with this morning explosive move higher. We also have the longer and broader basing pattern that will likely limit this move to somewhere around the $64 level. Remember, going forward that big pharma now has friends going forward on either side of the aisle, away from the fight against Covid-19, and BMY does not really have a dog in that fight.

For that reason, I might drag my feet on entering into an equity position on the long side in this name today. What an interested investor could do, without taking on significant risk, is this. Maybe purchase one $65 BMY November 20th call for around $2.10. The stock blasts past where I think resistance is and at least the investor is ready. That same investor could sell (write) a $55 BMY November 20th put for roughly $1.60. Those puts trade thinly so the price may have to be worked. This opens up the investor to equity risk at what I see as an acceptable level, while paying for most of the outlay. The trade described presents a net debit of just $0.50, which would have to be added to net basis in the event that an equity position were to be created. That said, the firm pays shareholders $1.80 annually just to hang around. That's a 3% yield.

Get an email alert each time I write an article for Real Money. Click the "+Follow" next to my byline to this article.
TAGS: Drug Approvals | Earnings | Investing | Options | Stocks | Technical Analysis | Trading | Pharmaceuticals