Avis Budget Group  (CAR) is expected to report its quarterly numbers on Wednesday. During his Mad Money program Friday night our own Jim Cramer was upbeat on the company following an upgrade from Goldman Sachs (GS) . How do the charts and indicators look ahead of the report? Let's check.

In this daily bar chart of CAR, below, we can see a long downtrend from around $50 back in March and April to just $22 in late December and early January. The in-dash navigation system would say that prices were headed south-east for much of the past twelve months. Prices recently perked up and have rallied above the bottoming 50-day moving average line but remain below the declining 200-day line. Volume has not increased much except for one or two days when prices made a small upside gap earlier this month. The daily On-Balance-Volume (OBV) line has been moving sideways the past two to three months. A rising trend for the OBV line would tell us that buyers had become more aggressive but we don't see that just yet. The Moving Average Convergence Divergence (MACD) oscillator has crossed above the zero line for an outright go long signal. There are some positive developments on this chart but overall the picture is not all that robust.

In this weekly bar chart of CAR, below, we see a mixed picture for this stock. CAR has held the $22 area in past - in early 2016 and again in the middle of 2017 - so it is not too surprising that the area held again at the end of December and early January. CAR is still below the declining 40-week moving average line. The weekly OBV line shows weakness from the beginning of 2018 and the MACD oscillator only shows a cover shorts signal and is a long way below the zero line and a buy signal.

In this Point and Figure chart of CAR, below, we can see an upside price target of $34 but we can also see that there is plenty of potential chart resistance between the current price level and $34. 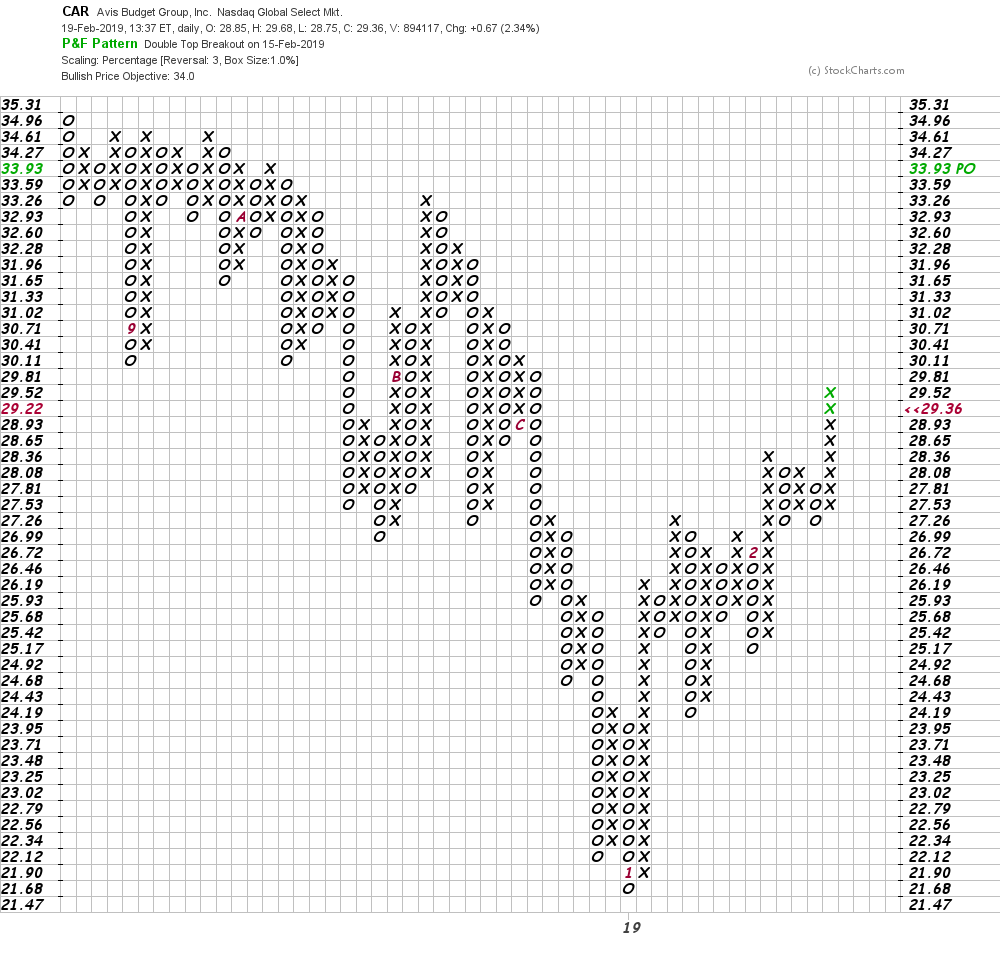 Bottom line strategy: after many months of price weakness it looks like CAR can firm up a bit but this strength might not be long sustained as the chart lacks a developed base pattern with increasing volume to support gains. I would be a renter and probably not a long-term investor.

Get an email alert each time I write an article for Real Money. Click the "+Follow" next to my byline to this article.
TAGS: Investing | Technical Analysis | Automotive