It's a tough morning... to report a blowout quarter. AutoNation (AN) , the multi-tiered automotive Fort Lauderdale, Florida retailer operating 315 locations nationally, simply blew away projections for the firm's second quarter performance on Monday morning. On a risk-off Monday morning. AutoNation reported EPS, GAAP EPS (the firm made a point of having made no adjustments) of $4.83, beating Wall Street by more than two bucks a share. Revenue generation landed at $6.98 billion, which beat Wall Street by almost a cool billion. In short, AutoNation posted earnings growth of 243% on revenue growth of 54%, accelerating the already outstanding pace of growth seen for Q1.

Inside the headline numbers the performance is just as impressive. Same store sales increased 54% year over year, and 33% sequentially. Same store gross profit increased 68% annually and 52% quarter over quarter. It's no secret that the consumer price index has been led at the headline level by used vehicles. Used vehicles, and used vehicles have been hot because new vehicles have become both hot and scarce due to a lack of automotive semiconductor chips as the pandemic has left many supply chains bottlenecked.

Perfect for a business such as AutoNation that retails both new and used vehicles, while also providing parts and service for these vehicles as well as all associated insurance and financing needs. The firm sells cars through three segments... "Domestic", selling vehicles manufactured by General Motors (GM) , Ford Motor (F) , and FCA US... "Import", selling cars made by Toyota (TM) , Honda (HMC) , and Nissan (NSANF) ... and "Premium Luxury" selling the brands of Mercedes-Benz (DDAIF) , BMW (BMWYY), Audi (VLKAF) , and Lexus.

Does this demand continue into 2022? Low interest rates are probably more persistent than many had expected. The chip shortage may last into next year, though Taiwan Semiconductor (TSM) sees this supply chain hiccup abatement sooner rather than later. Broader than the market for new and used vehicles, I see both economic growth and inflation as being very close to, if not already past-peak, and I also think that used vehicle prices were perhaps the most transitory of all inflationary pressures. Jackson may be right about this demand sneaking into 2022, but I find that a little hard to believe. Call me skeptical. Q3 (current quarter)? That's probably a cinch. 2022? That's asking a lot.

AutoNation bought back 7.5M shares, or 9% of all shares outstanding during the quarter for a rough $736 million. The board has just announced the authorization of the repurchase of up to another $1 billion. As of the end of the quarter, the firm had $59.5 million in cash and equivalents on the balance sheet, Inventory of $1.756 billion, and non-vehicle related debt of $1.997 billion. Now, the firm does have access to $1.6 billion in liquidity under an existing revolving credit facility.

Maybe I am old fashioned, too old fashioned. I know rates are low. I do not know what AutoNation's terms are but revolving debt is still revolving debt. I think I would rather tackle that debt than add to it in order to reduce the float. 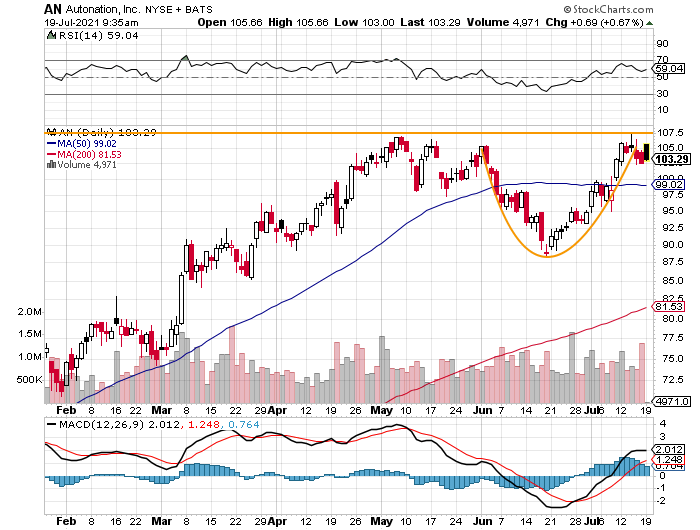 If one is in the name, the cup pattern is obvious. Your pivot is $107.50. However, the handle is really shallow right now. I would trust the pivot's ability to produce a breakout, if the handle were deeper. Perhaps test the 50 day SMA at $99. That's where I see AN as investable from here.

Otherwise, this is a trade, and it is probably not for me. Now, if I could get paid a rough $4 for the October $95 puts, I might be interested. Though that is probably a proper valuation for that series, the series does not trade well, so one must be careful if one goes there. No market orders.

Get an email alert each time I write an article for Real Money. Click the "+Follow" next to my byline to this article.
TAGS: Economy | Investing | Stocks | Technical Analysis | Trading | Automotive