By BRUCE KAMICH Oct 27, 2021 | 01:04 PM EDT
We reviewed the charts of Aurinia Pharmaceuticals Inc.  ( AUPH) on Aug. 4 and wrote that "The charts of AUPH are weak and pointed lower. Avoid the long side." The company was also mentioned in a column Wednesday by James "Rev Shark" DePorre.
Prices were trading around $12, but as the month wore on prices got stronger and lately there are rumors that a big pharmaceutical firm may take it over. I have no special knowledge of its earnings or any possible company tie-up.
I can, however, get a read on the charts. Let's check on AUPH again.
In this updated daily bar chart of AUPH, below, we can see that prices rallied into late September before correcting lower for a few days. In October prices soared sharply in a manner that might suggest a takeover deal could be announced. AUPH is trading above the rising 50-day moving average line and the rising 200-day line. AUPH is roughly twice the level of the 200-day line so they are considered extended or overbought in some circles. The On-Balance-Volume (OBV) line has soared higher to tell us that buyers of AUPH have been very aggressive. The Moving Average Convergence Divergence (MACD) oscillator is bullish.

In this weekly Japanese candlestick chart of AUPH, below, we can see the past three years of price movement. Recently prices made what I would consider a measured move or an A-B move. The first rally from $11 to $24 has roughly been equaled with the rally from $18. Prices are trading above the rising 40-week moving average line. The weekly OBV line is bullish and so is the MACD oscillator.

In this daily Point and Figure chart of AUPH, below, we can see a potential upside price target of $53. 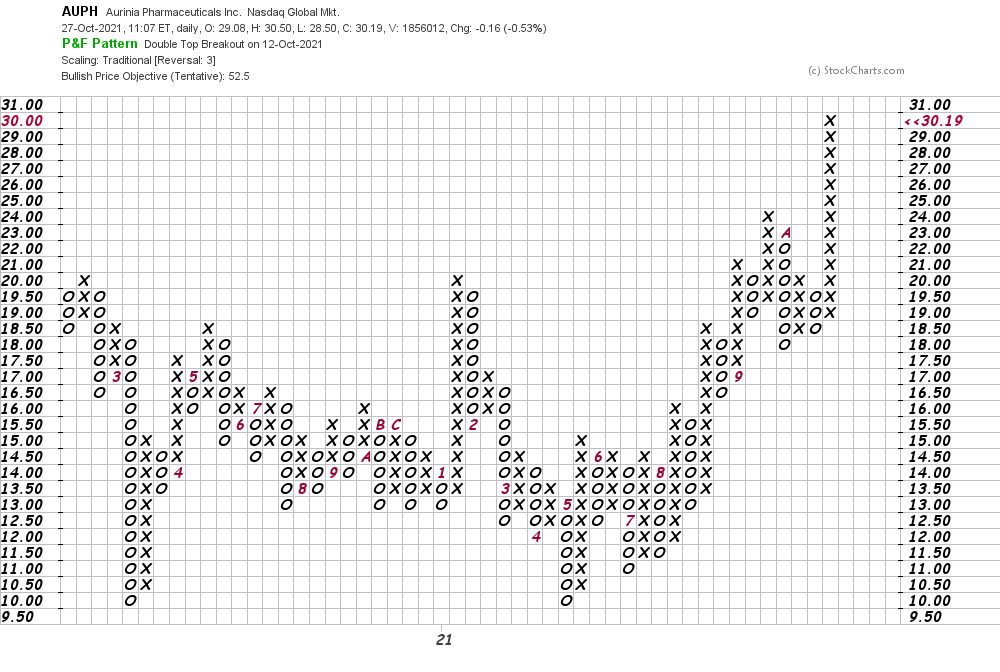 Bottom line strategy: I don't know of a possible deal or what its price would be, or if management is interested or if there is a white knight around. No idea. That said, the charts of AUPH are in an uptrend. The Point and Figure chart suggests $53 as a price target but weakness below $25 would be a technical problem. Do some fundamental research on this name and if you decide to go long I would recommend a $25 stop.
Get an email alert each time I write an article for Real Money. Click the "+Follow" next to my byline to this article.
TAGS: Mergers and Acquisitions | Investing | Technical Analysis | Pharmaceuticals