"Sell, sell, sell," was Jim Cramer's response to one caller during Monday's  Mad Money "Lightning Round" who was asking about AT&T (T) .

Let's check out the charts.
In this daily bar chart of T, below, we can see that prices have largely traded sideways the past 12 months. Within that sideways trend we can see lower highs made in June, December, and it looks like early April. Early this month we can see that T gapped lower and is now testing the slightly rising 50-day moving average line. The longer 200-day moving average line has a negative slope. Trading volume has been active since October but it has not resulted in a sustained advance.
The On-Balance-Volume (OBV) line shows a peak in December and it looks like another peak this month.
The trend-following Moving Average Convergence Divergence (MACD) oscillator has crossed to the downside and is not all that far above the zero line.

In this weekly bar chart of T, below, we see a picture that suggests further sideways price (in) action. Prices are trading above the 40-week moving average line but its slope is still negative.
The weekly OBV line has crept higher from November but it is struggling. The MACD oscillator is also struggling to cross above the zero line. 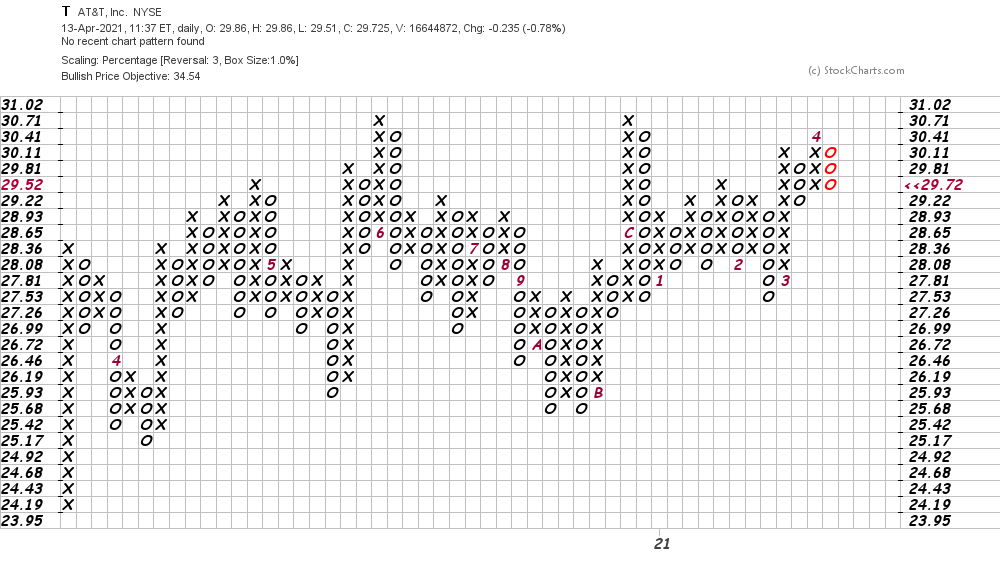 Bottom line strategy: The charts of T do not make a compelling bullish case at this point in time.
Get an email alert each time I write an article for Real Money. Click the "+Follow" next to my byline to this article.
TAGS: Investing | Markets | Stocks | Technical Analysis | Trading | Technology | Telecommunications | Mad Money | Telecom Services

I think holiday shoppers are going to return with vengeance this year.