For his second "Executive Decision" segment of Mad Money Wednesday evening, Jim Cramer spoke with Lee Bird, chairman and CEO of At Home Group (HOME) , the home decor superstore with shares that are up over 1,500% from their March lows. Shares of At Home still trade for just 13 times earnings.

Bird said consumers are still nesting. As they spend more time at home, they're spending more on their home, he said, which has led to a 40% increase in same-store sales. At Home's stores are large, with wide aisles, great sanitation and employees wearing masks, all of which kept customers feeling comfortable shopping with them.

Additionally, At Home has implemented curbside pickup and delivery options to complement their online operations, Bird said, but most customers still prefer to see their items in store before making a home decor purchase.

(See Jim Cramer's comments - Jim Cramer: Working at Home Is Not a Fad -- and the Implications Are Staggering)

Let's check out the charts of HOME.

In this daily bar chart of HOME, below, we can see that after a small bottom in March, April and part of May, prices exploded on the upside. A breakaway/runaway gap can be seen at the end of July and prices have reached their runaway or measuring gap target. The slope of the 50-day moving average line turned positive in May and the 200-day moving average line turned bullish this month.

The On-Balance-Volume (OBV) line has moved up strongly from late April telling us that buyers of HOME have been very aggressive.

The Moving Average Convergence Divergence (MACD) oscillator has been above the zero line since May but now shows movement towards a potential downside crossover and take profits sell signal.

In this weekly bar chart of HOME, below, we can see that prices were in a significant downtrend until this year. Prices have rebounded and have rallied back towards the underside of a band of potential resistance in the $20-$25 area.

HOME is above the rising 40-week moving average line but also extended above it.

The OBV line has moved up and is above its 2018 highs. The MACD oscillator turned bullish last month when it crossed above the zero line.

In this daily Point and Figure chart of HOME, below, we can see that the software has projected a potential price target of $29. 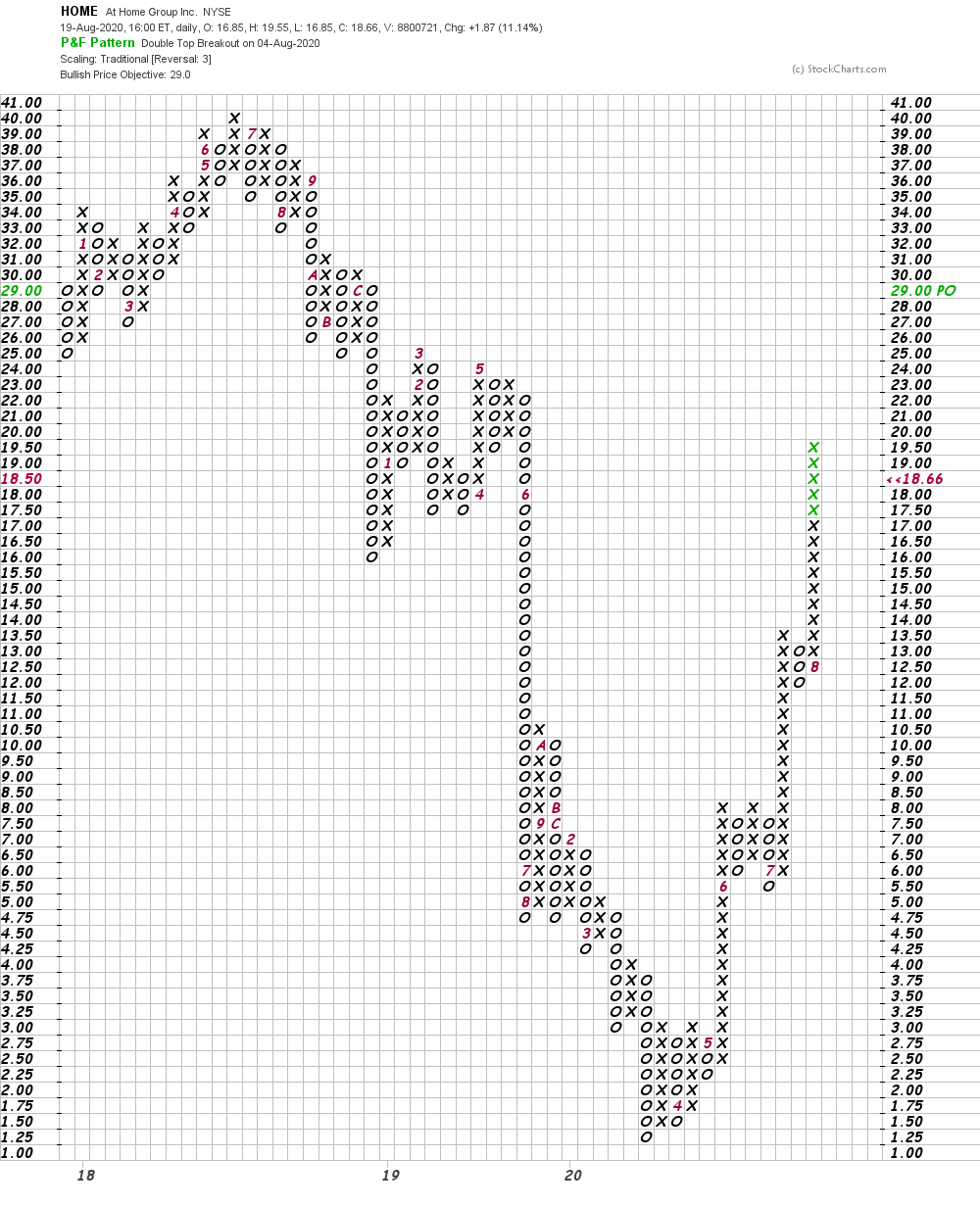 Bottom line strategy: The sum total of these three charts (above) is interesting. We have a higher Point and Figure target of $29, but we can only see a small two to three month base plus likely overhead resistance starting around $20. Throw in a measured move price target being reached (the points traveled before the July gap equals the points traveled after the gap).

Yes prices are pointed up and the OBV line is strong but I feel that buying HOME at current levels is coming very late to the party. I prefer to sit this one out for a while.

Get an email alert each time I write an article for Real Money. Click the "+Follow" next to my byline to this article.
TAGS: Economy | Investing | Stocks | Technical Analysis | Trading | Household Products | Retail | Mad Money | Executive Interview