ASML Holding N.V. (ASML) declined from a July zenith but it has seen its pullback slow as a rebound rally could be soon at hand. Let's explore some charts and indicators to see if this anticipated rally is worth participating.

In this daily bar chart of ASML, below, we can see the decline from above $220 to the $160 area. Since October dips into the $165-$155 area look like they have been bought. Volume looks heavier in October and November and that can suggest some change of ownership from weak hands to stronger hands. ASML tested the declining 50-day moving average the other day and was turned back down. The 200-day average line shows a peak in October and a negative slope since then. The daily On-Balance-Volume (OBV) line has declined from late July but could be bottoming now. In the lower panel is the 12-day price momentum study which shows higher lows from September to October to November - this is a bullish divergence when compared to the price action. Slowing momentum can foreshadow a rally in the days and weeks ahead.

In this weekly bar chart of ASML, below, we can see a strong rise for this stock over the past three years. Prices are below the declining 40-week moving average line but notice the mostly flat weekly OBV line - it has diverged at the highs but it also has not weakened much during the downswing. The weekly MACD oscillator is narrowing now towards a possible bullish crossover.

In this Point and Figure chart of ASML, below, we can see a downside price target of $149 but we can also see that a trade at $178.74 will be a triple top breakout. Take your pick. 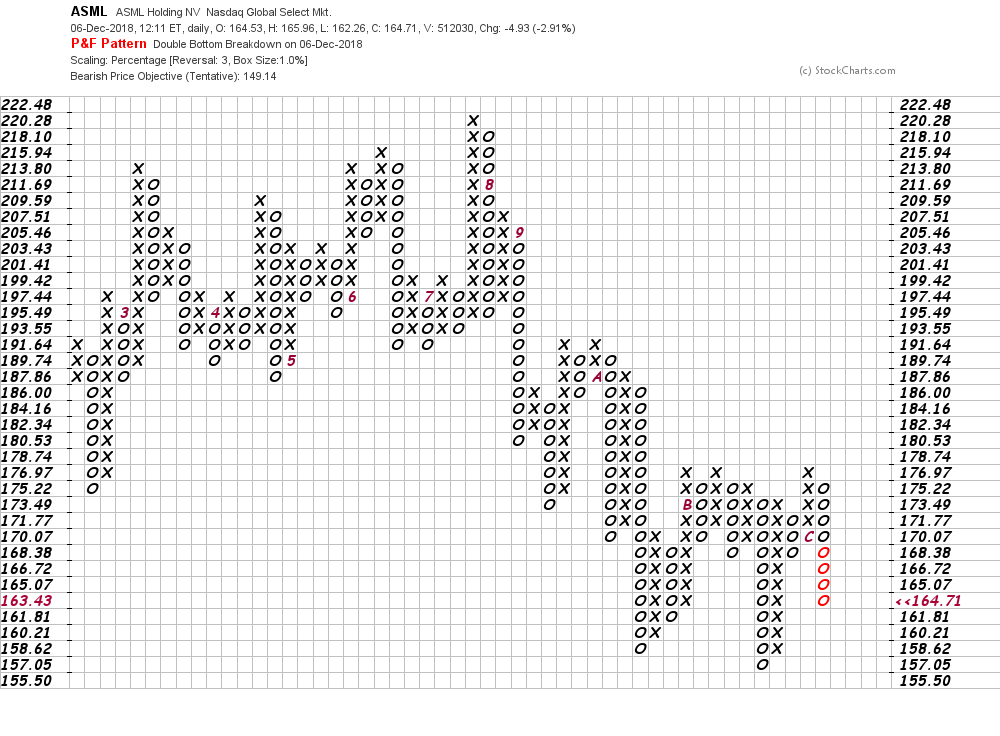 Bottom line strategy: investors and traders will be sitting on the edge of their chairs until the November highs can be cleared. With sentiment so bearish, in my opinion, I think the rally can come sooner than later. Aggressive traders could trade the long side on strength above $179.