Perhaps Zscaler (ZS) was my best call of 2020. Or was it 2019? Hopefully if you, the reader, followed me in, followed someone else in... or went in on your own, you stayed the course and held onto the shares. I can not complain. I have been long the stock multiple times. I am long the stock now. ZS has never cost me money, and has done quite well for me. That said, due to my code of discipline which tends to work out over the medium to long term in a broad way, I have taken profits. Many times.

The cybersecurity industry is crowded. That is the negative. Demand is here to stay and as commerce, as well as life, become more and more technologically advanced, will only grow. The industry is currently worth close to $200 billion and expected to grow in double digit percentage terms annually for the rest of the decade. The need for increased security over data and information will be a priority for businesses, government organizations, and even households probably for the rest of my natural life and beyond. The pandemic, and with it remote white collar work, has accelerated this transformation and brought forward demand from those that might have otherwise dragged their feet a little.

You have seen the names report this season. Palo Alto Networks (PANW) hit one out of the park. CrowdStrike (CRWD) did the same. Tonight, Zscaler steps to the plate with the firm's fiscal fourth quarter results.

I can find 25 sell-side analysts that cover Zscaler. Consensus EPS view seems to be coalesced around $0.09, with everyone packed in between $0.08 and $0.15. Wall Street appears to be looking for revenue generation of roughly $187 million. The range of expectations for revenues runs from $185 million to $195 million. Throughout this reporting season, there have been very few revisions made among these 25 analysts. We have one downside revision to EPS expectations, and two upside revisions made to revenue projections. That's it, which is very strange in my opinion... for the vast majority of those charged with having an opinion to stay exactly where they came in three months back.

Should results match perceived consensus, the quarter would show as 80% earnings growth on 48% sales growth. Billings are seen printing at $276 million, up from $225 million three months ago, while deferred revenue is expected to land close to $585 million, up from $495 million for the fiscal third quarter.

The balance sheet will be of interest tonight. Not that it was weak three months ago. Not at all. As of three months ago, cash and short-term investments alone dwarfed current liabilities and made up nearly three quarters of total assets to boot. The firm had $900 million in long-term debt, comprising about 60% of total liabilities less equity. I would like to see if long-term debt has stayed put, or if some of that large cash/short-term balance has been put to work in some way.

In addition, don't forget that ZS raised full year guidance for revenue, billings, and adjusted EPS going into this fiscal fourth quarter. My expectation is that they hit these targets across the board. Will the firm go out on any kind of limb for the current full year this early in their fiscal year, the current quarter being Q1? That's what will decide the overnight direction of the stock in my opinion. 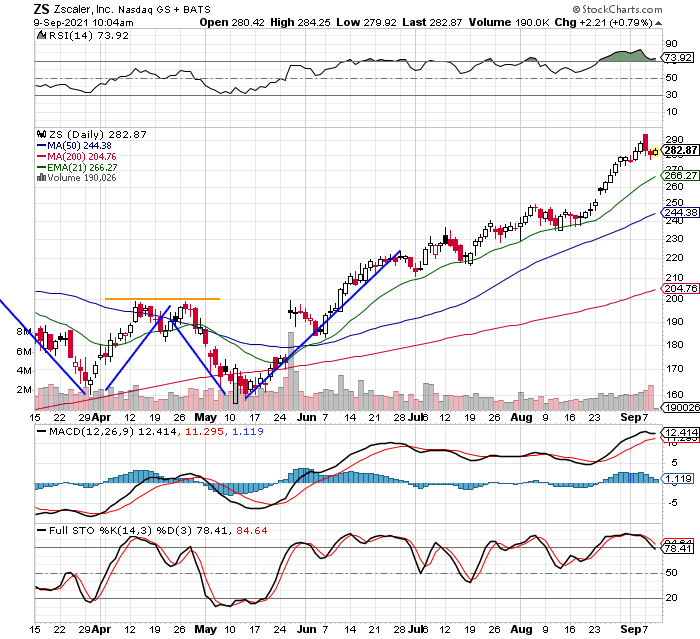 The stock is currently trading where a technical trader would take profits coming off of last spring's double bottom pattern. We know this stock does not necessarily play by the rules. The shares are up 23% since the end of July. The RSI, Full Stochastics Oscillator, and daily MACD are begging you to take something off of the table going into the numbers.

I have already done that. I am going to go in long what I'm long, which is about one third of what I came out of that double bottom holding (... and I had to chase my way back in there). What a trader could do in my position would be to sell (covered) September 10th (tomorrow) $300 calls for about $5.25. The trader open to taking on increased equity risk at a discount could also sell the September 10th $265 puts for roughly $4.75. The trader that does both, reduces net basis on those "new" shares from $265 to $255 even if the shares are put to them at the end of the week. If the shares stay between $265 and $300... well, that $10 is all realized premium.