Zoomerrific! What is there to say about Zoom Video (ZM) ? Personally, I was in early, and out early. Then I was in again, then out again, early. Two decent trades. Should have been one awesome-ful investment. You know what they say. No woulda, shoulda, couldas. There are no lousy profits. The firm reported its fiscal third quarter performance on Monday evening. To say that Zoom Video hit the ball out of the park does not do the quarter justice. To say that the share price is probably way too high for where the firm is in their development, or brought forward more quickly than perhaps where it should be given the landscape. Let's dig in.

For the firm's third quarter, Zoom Video posted adjusted EPS of $0.99, crushing expectations down in the $0.70's. Revenue generation grew an astounding 366% to $777.19 million. This too, easily beat the street. Sifting through the details, there is a lot to like. I see 1,289 customers contributing more than $100K in revenue over the past 12 months. That number is good for growth of 136%. I see 433,700 customers with more than 10 employees. That's a growth of 485% year, but just 17.2% sequentially. This suggests some slowing of the pace of growth. Perhaps most folks who need to learn or work from home have already found their solutions. While growth is still a positive, this is a caution sign. There are others.

While free cash flow of $388.2 million left the firm with a nest cash position of $730.4 million, margin has possibly peaked. Gross margin of 66.7% for Q3 is excellent, but down slightly from Q2's 67.3%. Why? Simple. An elevated mix of free users such as teachers and students on a budget. The firm has also acknowledged an increased reliance upon public cloud resources.

Don't get me wrong, there is clearly strength here, and the firm even raised guidance. For the current quarter, Zoom now sees revenue generation of $806 million to $811 million. That's versus consensus view of $719 million. The firm also sees adjusted diluted EPS for this quarter of $0.77 to $0.79 versus the $0.62 that Wall Street was looking for. This brings FY 2021 forecasts up to revenue of $2.575 billion to $2.58 billion, producing adjusted EPS of $2.85 to $2.87. Revenue of $2.4 billion had been the expectation. 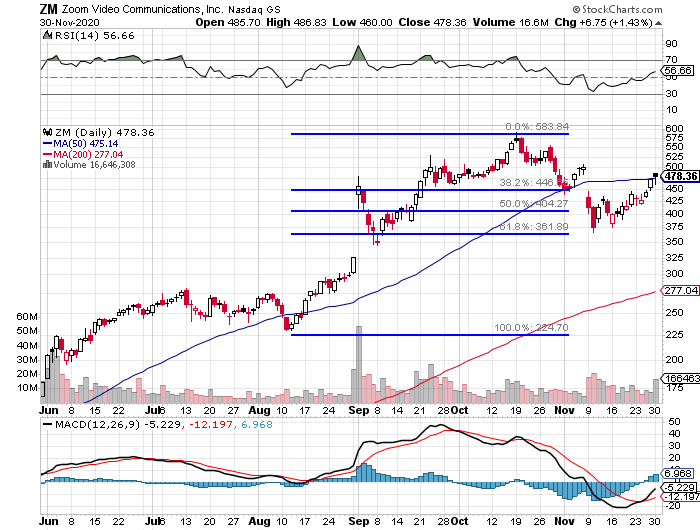 Readers will note that while the stock is suffering a bout of profit taking early Tuesday morning, there remains in my opinion more risk to the downside than the upside at this point. I see a last sale of $443, down more than 7% from Monday's close. I also see stiff resistance ahead of earnings at the 50 day SMA, as well as what had been early November support at a standard 61.8% Fibonacci retracement of the August through October rally. Should the stock meander lower from here as vaccines eventually bring people back together, and that spot faces a third test, there also remains that unfilled gap in between $325 and $340 that seems to be waving at us. Yes, we see you. There's more.

Let's not forget that ZM trades at 53 times forward looking sales, not earnings, so it is expensive. In addition, there is what should be better competition ahead than there has been behind. Just as the possibility that demand could ebb somewhat by springtime. I have long expected Microsoft (MSFT) Teams to better compete for this business. Microsoft has finally added an enhanced video feature to this collaboration platform in order to make an effort toward capturing some of Zoom Video's market share. You want to bet against Satya Nadella? Me neither.

Then there is all of this scuttlebutt that at some point soon, possibly today (Tuesday)... Salesforce (CRM) will announce the acquisition of Slack (WORK) when Salesforce goes to the tape with its own quarterly numbers after the closing bell. Slack should have been more of a player in this space throughout the pandemic. Salesforce CEO Marc Benioff probably understands that missed opportunity, and sees something that his team could do better. You want to bet against Marc Benioff? Yeah... me neither.

The bottom line is that Zoom Video has caught the attention of the big kids, and will now have to play in a tougher league facing tougher pitchers. Is Zoom Video CEO Eric Yuan ready for that? He might be. To pretend that the downside risk is potentially enormous is to fool oneself. That said, I am not brave enough to short the name. I would rather get long a bear put spread if interested in a bearish play.

(MSFT and CRM are holdings in Jim Cramer's Action Alerts PLUS member club. Want to be alerted before Jim Cramer buys or sells these stocks? Learn more now.)

Get an email alert each time I write an article for Real Money. Click the "+Follow" next to my byline to this article.
TAGS: Earnings | Investing | Stocks | Technical Analysis | Trading | Media | Coronavirus