On Friday morning, one of the two banks that I have hung onto in order to sustain a minimal level of exposure, Wells Fargo (WFC) released the firm's second quarter earnings.

If you heard on Fox Business on Thursday afternoon that I had increased my long position in my other holding, Bank of America (BAC) , that is true. I had chosen these two banks for their largely domestic businesses and their greater reliance on traditional banking, and lesser reliance on the "gravy" businesses, as we used to call them back in the go-go days of the internet boom.

Wells Fargo posted GAAP EPS of $0.74 on revenue of $17.028B. We had expected a poor quarter and the market had priced one it. These top and bottom line results, however... did manage to fall short of those expectations. The earnings print amounted to y/y 46.4% contraction, while the revenue number was good for annual "growth" of -16%.

Net interest margin on a taxable equivalent basis increased to 2.39% from 2.02%.

Provision for credit losses was $580M versus a benefit of $1.26B one year ago.

The firm expects that full year 2022 net interest income will end up a rough 20% higher than full year 2021, which ended up at $35.8B. The firm's expectations for non-interest expense stands at about $51.8B.

CEO Charles Scharf added: "Looking ahead, our results should continue to benefit from the rising interest rate environment with growth in net interest income expected to more than offset any further near-term pressure on non-interest income. We do expect credit losses to increase from these incredibly low levels, but we have yet to see any meaningful deterioration in either our consumer or commercial portfolios."

A lot of the negative aspects of this release were already priced in. We knew earnings were going to take a hit because we knew that the mortgage, venture capital, brokerage advisory, and investment banking businesses had all taken a hit. We knew revenues would be down. With possible recession looming, we knew that there would have to be an outlay for making a provision for credit losses instead of a huge release from those provisions, which is what we saw a year back.

About the only true surprise was the size of the expectations for net interest income for the full year. As I said, we are only in this name because Wells Fargo is domestic, and Wells Fargo is bigger in traditional banking than they are in the fancy stuff that gets us paid in heady bull markets. Now, we just need the yield curve to un-invert so we can keep that net interest margin on track. 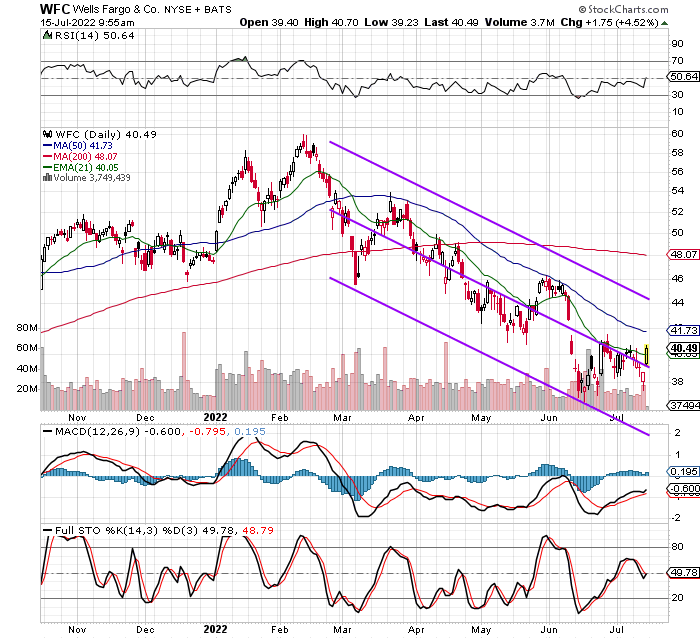 Obviously, I am pleased with this morning's price discovery in WFC. Readers will see that the stock has remained well within the trend lines provided by this Regression model going back to early February. That said, this morning WFC appears to have taken back its 21 day EMA, with the more important 50 day SMA ($41.73) not really too far off. That's my pivot.

If WFC can take and hold that 50 day line, then we can talk about the 200 day SMA, but that's almost a 20% run from here, so we'll keep our cool. The stock also appears to be potentially building a base with visible support close to $37. That's where I would like to add. How does selling WFC October $37.50 puts for a rough $1.90 sound? That's a net purchase price of $35.60 if the investor does end up eating the shares. If not, its a nice meal at your favorite restaurant.

Get an email alert each time I write an article for Real Money. Click the "+Follow" next to my byline to this article.
TAGS: Earnings | Economy | Investing | Stocks | Technical Analysis | Trading | Banking