The news of late has varied, some of it very positive. PepsiCo (PEP) is participating in a "zero-emissions" freight project funded by a $15.4M grant produced by the California Air Resources Board. PepsiCo plans to use 15 Tesla (TSLA) electric battery tractors (semis) and other electric or natural gas powered vehicles at a Frito-Lay facility in Modesto, CA.

The Tesla Semi boasts a 500 mile range, and features three electric motors with differing functions. This will provide a smoother ride and an efficiency that depending on the cost of electricity could work out to a $70K per year savings in fuel expenses. Last week, Tesla delivered the first of those trucks to PepsiCo.

That said, both Bloomberg News and Reuters are reporting that Tesla will slow production at the Shanghai facility by as much as 20% in December versus November in anticipation of decreased demand across the domestic Chinese market. Tesla has come out and denied these reports.

Then There's This Question

Can one man, no matter how brilliant, no matter how talented, really run Tesla, SpaceX and Twitter, and stayed focused enough on all three companies to lead them well? We've never seen anyone like this before, so I am not casting doubt. I just don't know.

Ford Motor (F) announced the production of the firm's 150,000th Mustang E since inception last week. We noticed that despite disappointing headline vehicle sales for the month of November at Ford, that EV sales grew 102% year over year. We also noticed last week that Ford is investing another $180M just to increase electric vehicles power unit capacity at its factory in Northern England.

General Motors (GM) and virtually every other legacy automobile maker is in the EV game and getting better at producing quality vehicles all the time. Then there are the rapid gains being made by China's BYD Co Ltd (BYDDF) , and those vehicles are very affordable. Market share is already in decline at Tesla, and with so many competitors now playing along, it becomes difficult to see how Tesla's market share makes a stand anytime soon. Even if the vehicles are still seen as best in class.

Tesla is not expected to report the firm's fourth quarter until late January, so we are about half way from one earnings report to the next. Currently, Wall Street consensus is for adjusted EPS of $1.27 within a span ranging from $0.86 to $1.51. This would be on revenue of $26.35B. That estimate stands within a range spanning from $23.75B to $28.75B. At consensus, this performance would be good enough for earning growth of about 48% on revenue growth of roughly 41%.

That's a lot of growth at a time when many "growth" stocks can not boast numbers like this. That said, as robust as those numbers look, they still represent a deceleration from 2021 growth rates on both lines.

The stock still trades at 46 times forward looking earnings. Then again, as mentioned above... TSLA is still technically a growth stock. One thing that nobody can complain about is Tesla's fundamental strength.

Free cash flow per share was the strongest it has ever been for this firm for the third quarter, which ended with September. The firm ended the quarter with more cash on the balance sheet than ever before, with more current assets and total assets than ever before. Tesla stood with a current ratio of 1.46 at that time and a quick ratio of 1.04. That quick ratio is excellent for an inventory-centric business such as this.

In addition, as of September's end, Tesla had the ability to pay off its entire debt-load almost nine times over out of pocket. These fundies are as good as anyone's. 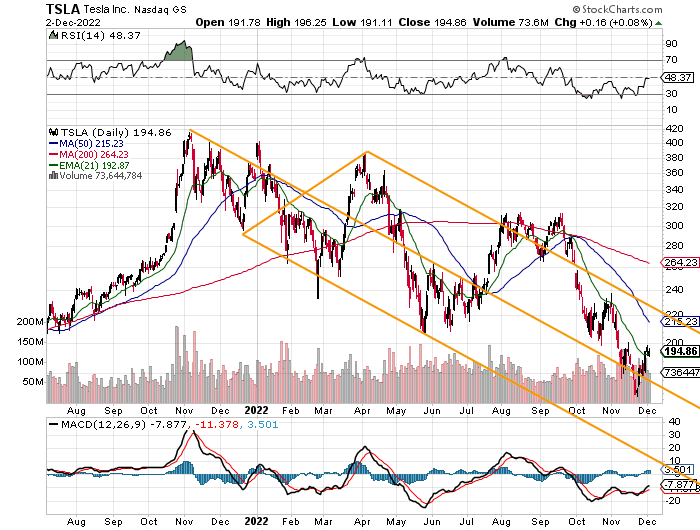 Readers can plainly see that TSLA remains in a year-long downtrend. The shares had recently retaken the 21 day EMA, but will have trouble holding that line as the shares are under pressure this morning. Neither Relative Strength nor the daily MACD sends a bullish signal to investors. The truth is that Tesla can tread water for as long as it probably needs to with cash flows and the balance sheet in the shape that they are/have been in.

That said, investors don't buy stock so they can tread water. I would need a discount to put myself at equity risk in this name unless the CEO once again makes this name his primary focus. An investor interested in taking a second swing at those November lows at the $166 level, could sell a January 20th (expiring ahead of earnings) $175 put for a rough $8. If the put(s) expire worthless, $8 is a nice payday. If the investor ends up long 100 shares, the trade would bear a net basis of roughly $167.

I see these shares trading with a $189 handle this morning. It's an idea.

(PepsiCo and Ford are holdings in the Action Alerts PLUS member club. Want to be alerted before AAP buys or sells these stocks? Learn more now.)

Get an email alert each time I write an article for Real Money. Click the "+Follow" next to my byline to this article.
TAGS: Earnings | Investing | Markets | Stocks | Technical Analysis | Trading | Elon Musk | Electric Vehicles