Quite frankly, when I wrote to you on May 18th covering Target (TGT) earnings and had decided not to take on a position at that time, I did not expect to be covering the stock again so quickly. If you didn't already, now you'll know why when I analyze a balance sheet, and come up with a company's quick ratio, I also omit stated inventory valuations and run a quick ratio. That's because you just can't always count what any company thinks that their inventories are worth. Tastes change. Demand evolves. What you paid for the goods means nothing. It's what their worth to your buyers that matters.

Shares of Target that closed at $159.67 on Monday, and are down 40.6% from their November highs, and still down 26% from May 17th... traded lower still on Tuesday as the firm cut current quarter margin forecasts for the second time in under a month. Just about three weeks after guiding the investing public toward a Q2 operating income margin of 5.3%, the firm now sees that margin at more like 2% for the period. Target still sees margin improving (to close to 6%) over the second half of the year.

The firm announced a set of actions meant to "right-size" inventories for the balance of the year, and implement pricing actions taken to address the impacts of high transportation and fuel costs.

Target CEO Brian Cornell stated, "Since we reported our first quarter results, we have continued to monitor external conditions and have determined the necessary actions to remain nimble in the current environment. The additional steps we are announcing today will ensure that we deliver for our guests while driving further growth. While these decisions will result in additional costs in the second quarter, we're confident this rapid response will pay off for our business and our shareholders over time."

Kind of makes me think about and doubt something Cornell said three weeks ago... "Despite these near-term challenges, our team remains passionately dedicated to our guests and to serving their needs, giving us continued confidence in our long-term financial algorithm, which anticipates mid-single digit revenue growth, and an operating margin rate of 8% or higher over time." Might want to check that algorithm.

This is an exact reprint of what I wrote to you on May 18th...

At the close of the three month period ending April 30th, Target had a net cash position of $1.112B and held inventories marked as worth $15.083B. This brings current assets up to $17.953B. Total liabilities printed at $20.724B. That puts the firm's current ratio at 0.87, dropping this ratio below the 1.0 level which is fundamentally important. Omitting inventories from the equation, the firm's quick ratio stands at an absolutely ghastly 0.14. I know, quick ratios are not quite as focused on in retail as they are elsewhere as inventory building is part of the game, but I think at this time, the values of said "bloated" inventories has to be treated as subject.

Target's total assets add up to $50.842B that includes no entry for "goodwill" or any other intangible asset. That's to the firm's credit as the brand is very well known and there surely is some significant intangible value in the brand name alone. Total liabilities less equity amounts to $40.068B. This includes long-term debt and other borrowings of $11.509B. Obviously, I think that the debt-load is a bit high relative to cash on hand. Like with Walmart (WMT) , this balance sheet does not pass the Sarge test.

It's not like we did not see a problem with those inventories. The speed with which that came about, however, is stunning. Regular readers will recall that I was considering getting long Target stock in the wake of what happened to Walmart, thinking that Target could not have done a worse job than Walmart in managing the first quarter. That was wrong. Target could manage the quarter just as poorly as Walmart. My ability to read a balance sheet saved me from getting involved in a tough stock to be in. Three cheers for fundamental analysis. 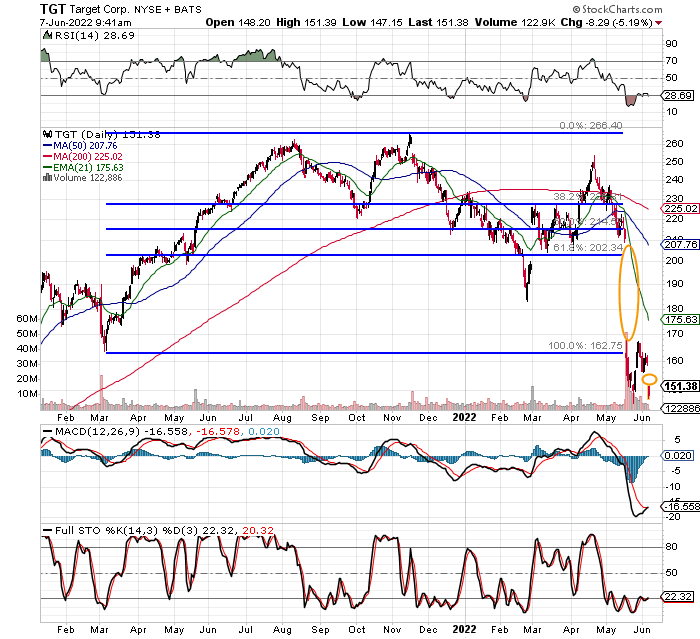 Target stock has now retraced more than 100% of the March 2021 through August 2021 rally that we talked about three weeks ago, and has now created two unfilled gaps in doing so. Will they fill? The legend says eventually. We can grow old watching unfilled gaps close. Honestly, can you buy Target here?

Maybe. Bet you did not expect an answer like that. Check this out. Nobody wants TGT here. Lousy margins. Lousy balance sheet. Probably widespread retail pain to come, meaning that there are going to be "beat down" days where the entire group gets smashified thanks to the wonders of passive investment. That means that I am not buying any shares anytime soon. 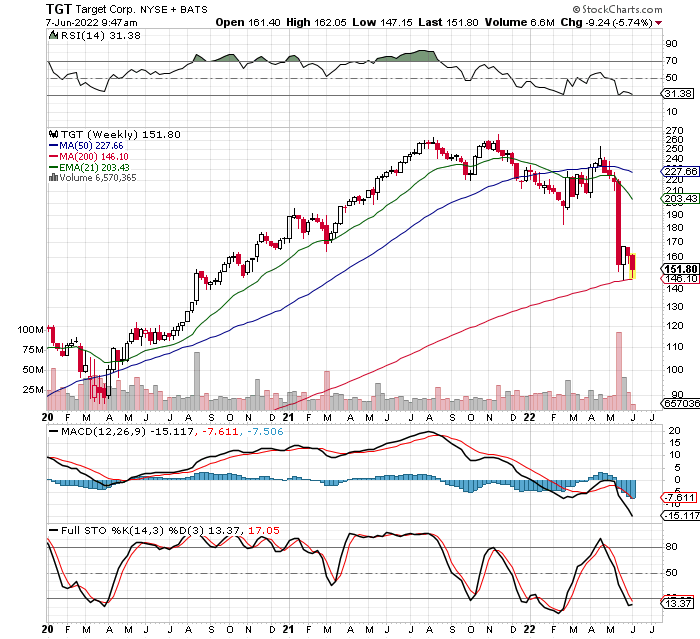 ... Target stock has found support at the 200 week SMA twice now in two weeks. Though the stock has been rolled back to September 2020 levels, these are the levels to watch. The RSI, weekly MACD, and full stochastics oscillator all agree on a technically oversold weekly set-up. Should the level actually crack? Then, I think we may have a trade. Not an investment until that balance sheet smells a little better, but a trade.