PepsiCo (PEP) led off the third quarter earnings season on Wednesday morning, reporting just ahead of a number of large banks. For the three month period ended September 3rd, PepsiCo posted adjusted EPS of $1.97 (GAAP EPS: $1.95) on revenue of $21.971B. Both top and bottom line performance exceeded expectations as the firm recognized $1.4B in charges related to its withdrawal from Russian markets.

That revenue number was good for an increase of 8.8% (organic revenue was up 16%), as operating profit increased 6.14% to $3.353B. This led to net income that increased dramatically (+21.5%) to $2.702B, as net interest expense and provisions for income taxes decreased from year ago levels. PepsiCo remains a free cash flow beast, by my math posting $3.75B in aggregate FCF over the past nine months.

For the full fiscal year, PepsiCo now expects to deliver 12% organic revenue growth and 10% core constant currency EPS growth. These numbers are up from the firm's previously guided to growth of 10% and 8%, respectively. Consistent with prior guidance, the firm still sees a core annual effective tax rate of 20%, and total cash returns to shareholders of approximately $7.7B. This will be comprised of $6.2B in dividend payments and $1.2B in share repurchases.

PepsiCo ended the quarter with a net cash position of $6.742B and inventories of $5.019B. Both of these entries are up since year's end and brought current assets up to $23.543B. Current liabilities amounted to $25.653B including $3.109B in short-term debt. This leaves PepsiCo with a current ratio of 0.92. While this ratio is a bit weaker than desired, it is up from 0.83 since the start of the fiscal year, so the firm is obviously working toward and making progress toward improving their current situation.

To be clear, I don't love this balance sheet. I would rather see the relationship between cash on hand and the firm's debt-load more balanced. I don't see these inventories as problematic as they are pretty much split between raw materials and finished goods.

This was a very solid quarter led by Frito-Lay and Latin America. There is no doubt about that. The lift to guidance will pop the stock this morning. That said, the balance sheet sure could be improved upon. The firm pays shareholders $4.60 per year to stick around. This yields 2.83%. It would hurt the share price at first, but perhaps it behooves management in the long run to use some of that free cash flow to pay down some debt. Probably not going to happen. The stock is up 3% this morning, but down 7.7% since mid-August.

I am not long this name. I am long Coca Cola (KO) , which will report on October 25th. KO is up this morning as well, as part of PEP's pin action. KO has a stronger balance sheet than PEP, hence the basis for my decision to be long one and not the other. That said, PEP has Frito-Lay and KO has nothing similar. That may just give PepsiCo the advantage in a side by side comparison. 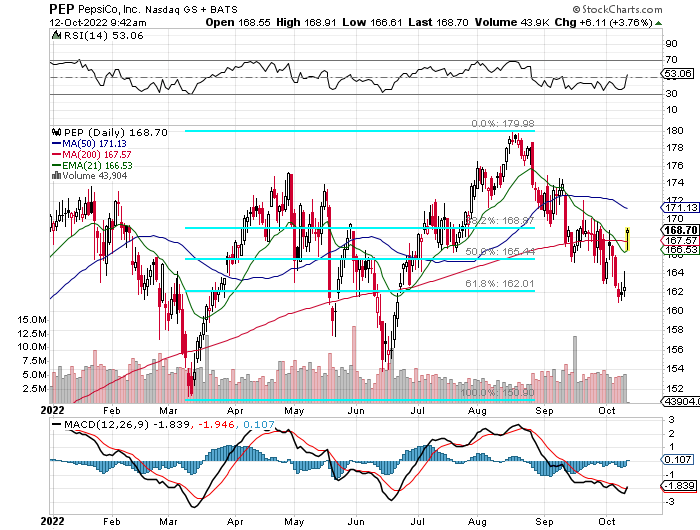 Readers will see that PEP has recently found support at nearly a perfect 61.8% Fibonacci retracement of the stock's March through August run. The stock's daily MACD, which has been technically weak since last August, has experienced a bullish crossover by the 12 day SMA of the 26 day SMA, though with both still in negative territory, investors must treat that bullish reading with caution.

The stock has retaken its 21 day EMA this morning and is now coming up on what will be a key test at the 50 day SMA ($171). This could provide intraday resistance. If I were interested in purchasing equity in PepsiCo, I would rather wait to either pay $164 on a fill of the newly created gap, or pay above $171 on momentum than act with the shares still close to that level.

That said, the patient investor could probably sell PEP November 11 $65 puts for more than $3, and get paid for that patience, ultimately knocking that $3 premium off of net basis whether paying $165 or $172 for said equity.

(PepsiCo is a holding in the Action Alerts PLUS member club. Want to be alerted before AAP buys or sells PEP? Learn more now.)

Get an email alert each time I write an article for Real Money. Click the "+Follow" next to my byline to this article.
TAGS: Earnings | Investing | Stocks | Technical Analysis | Trading | Beverages | Food & Staples Retail | Food & Drink