An oldie, but a good-ie. can it be? Steady Eddie. Somehow, my twenties turned into my fifties. Somehow, being shocked that Dwight Gooden was younger than I, yet the toast of the National League... turned into being shocked when I can read anything at all without fumbling for my glasses. Through most of my career, since going public in 1986, (another Gooden reference?)... there has been Microsoft (MSFT) . Windows. Office. Still useful, but the story goes on. Way beyond.

Microsoft will report the firm's fiscal third quarter this evening once those twin bells at 11 Wall Street and Times Square stop ringing. The street looks for EPS of one dollar flat on revenue of $29.84 billion. If realized, this will be a year over year increase of 11.3%, growth well above broader expectations for the S&P 500.

For me, a trader long this name, the focus has to be on cloud computing, as it now has to be for the software industry altogether. Yes, recurring revenue products like those already mentioned are valuable drivers of performance. Yes, many are betting on gaming, but gaming has been balky this year. A stronger February has been followed by a weak again March decline in sales across that industry. That said, Azure is how success will be measured for Microsoft. Azure will determine the path that the stock price will take moving forward. So let's focus on that.

Last week, KeyBanc analyst Brent Bracelin indicated that he sees subscription based APR for Azure topping the $12 billion mark, while he sees subscription APR for Office 365 beating $20 billion. By the same token, UBS analyst Jennifer Swanson Lowe, according to Barron's sees 2019 revenue for Microsoft, along with Abobe (ADBE) , and Salesforce (CRM) topping broader industry-wide expectations. Then, also last week, Keith Weiss of Morgan Stanley named Microsoft as representing the "best risk/reward in software." So... the analyst community is convinced. Are we? That's more important. Analysts are fine, but unlike them, when we are wrong, we actually lose money.

I am watching closely two items regarding Microsoft's cloud business. One is just how fast Azure's hybrid cloud for business is growing. How attractive are businesses finding this offering versus the chief competitor, which is Amazon's (AMZN) AWS service. That brings us to the pentagon's JEDI program. Last week, Microsoft revealed two data centers that have been designed and created solely for classified information. Remember that Amazon has already been cleared to host top secret data for both the CIA and the DOD, while Microsoft still awaits such clearance. The DOD's JEDI program which is what the military's cloud contract is known as, is worth $10 billion, and has devolved into a winner takes all sort of playoffs. The last two competitors standing are Amazon and Microsoft, after IBM (IBM) , and Oracle (ORCL) were eliminated and Alphabet (GOOGL) voluntarily dropped out. We will need to hear comment on this. 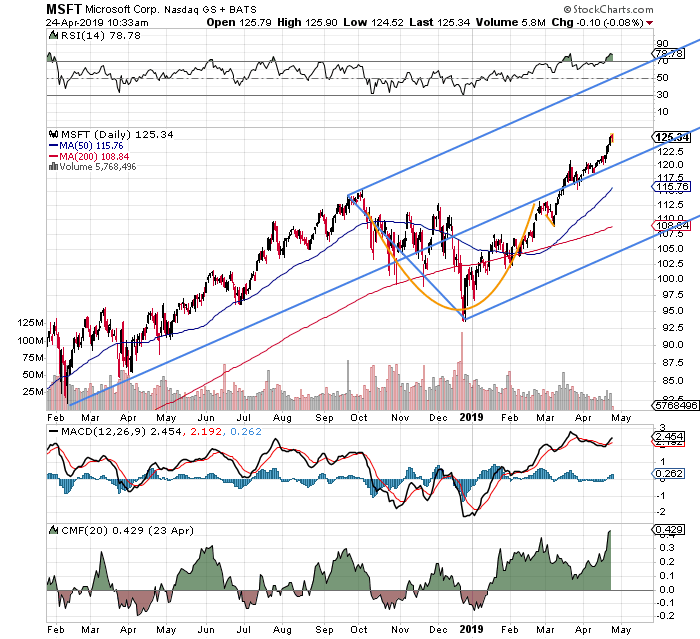 There is obviously a lot to like here. Whether one trusts the blue Pitchfork, or the orange Cup with Handle, both have been supportive throughout 2019, the breakout out of that handle probably more so of late. As you can easily see Money Flow has been robust, while the daily MACD and Relative Strength nearly too robust. Perhaps overbought.

Like I have said, I like Microsoft. That said, we are sort of closing in on my target price of $132. I would not be surprised to see a knee-jerk in either direction after the call tonight. That said, the cloud is the future (along with 5G), and Microsoft is a dominant force in providing that cloud across U.S. business. I would think that these shares continue to move higher, even if there is a spate of profit taking this evening.

Note 1: I have enough exposure, but a trader interested, but not willing to pay current prices could target next earnings season by.....

Get an email alert each time I write an article for Real Money. Click the "+Follow" next to my byline to this article.
TAGS: Earnings | Investing | Markets | Options | Stocks | Technical Analysis | Trading | Software & Services | Technology | Earnings Preview