Did you ever think that "cloud king" Adobe (ADBE) and GameStop (GME) would almost simultaneously release quarterly financial results, almost in isolation from the rest of the equity universe, and Wall Street's attention would be more on the latter than it would be on the former. Welcome to 2021. Almost as bazaar as was 2020.

GameStop is set to post the firm's Q4 performance to the tape this (Tuesday) afternoon. Does this mean that finally, the focus for this firm returns to some kind of fundamental analysis based norm? I wouldn't bet the farm. Only six analysts even follow GameStop these days. Among those six, the average expectation for adjusted EPS is $1.35 with a high of $1.72 and a low of $0.84. The average revenue projection is for $2.1 billion, with a high of $2.36 billion and a low of $2.09 billion... so there really is no consensus.

On the average expectations, this would be earnings growth of 6.3% on revenue growth of 0.8%. Expectations are also for comparable sales growth of 4.7%, gross margin of 25.1%, and operating margin of 5.7%.

This will be the first earnings results released by the firm, and really the first official communication between the firm and the public since the whole WallStreetBets (subreddit) phenomenon, where a community of retail investors (with a lot of help from high-frequency algorithmic traders) forced an incredible short-squeeze and forced at least one major hedge fund to the humiliating point of crying out to its investors for help, while having to admit to those same investors that absolutely nothing had been done to hedge such a large and dangerous position. Talk about failing to execute the basics.

Ryan Cohen, who is a co-founder of Chewy (CHWY) has recently been added to GameStop's board of directors. Matt Francis, who is a former engineer at Amazon (AMZN) AWS has been named the firm's first Chief Technology Officer. There's more. About a month back, CFO Jim Bell resigned his position. Scuttlebutt at the time was that he had been pushed out. This morning, we learn that Chief Customer Officer Frank Hamlin will also be resigning effective March 31st. The activists still making themselves felt? No idea.

I do know that largely having a retail footprint of 4,800 locations primarily centered around "the mall" probably stopped working a long time ago. This game changer... Ryan Cohen has called for GameStop to shed itself of the majority of its physical retail footprint and turn itself into an "Amazon of gaming." The plan appears to be underway.

The whole short squeeze that put this name in the news on a daily basis actually did stir up some business for the actual stores. While Covid-19 related restrictions existed across a number of states, and as well known, the weather was friend to nobody this winter. Barron's reports (citing data originating at Placer.ai) that foot traffic was down a rough 18% year over year for Christmas week, and despite a small pop the next week, declined throughout most of January. The week of February 15th, foot traffic was off some 26%, but narrowed to just -3.9% by the week of March 8th.

Overall, for the nine week holiday period comp same stores sales grew 4.7%, but e-commerce by over 300%. The transition? Already well under way. My feeling is that this firm could literally report anything on Tuesday night. The press conference is slated for 17:00 ET. That's when the fireworks begin. As long as real growth is in the future, and there is a saleable story in place... beauty, I mean valuation... is in the eye of the beholder. 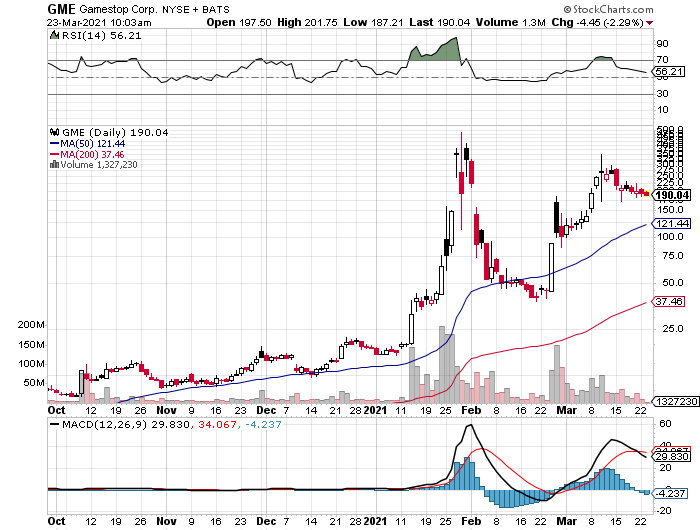 Really quite meaningless at this point. The only things I see here that matter... would be a negative looking daily MACD, but a reading for Relative Strength that no longer appears to be overbought. Would I buy the stock here? No. Would I short the stock here? No. Short interest is way too high. I have told you many times, I never short any stock where 10% of the float is held in short positions, and even 8% will slow me down. Still 50% plus at last glance? Oh, I hope those aren't traders hanging on for dear life from much lower levels.

What I was doing during the short squeeze was shorting or writing deep out of the money puts myself and a lot of them. It's not exciting. In fact it's very boring. Would you risk having to buy GME at $25 in May? You can still get paid $1.15 to take on that risk. How about $10 out as far as January? You can still get almost $1.25 for those. In fact I have written some of those. This strategy has been a piggy bank of sorts over the past two months or so. It's not always there with these "meme" stocks, but if you can get paid to expose yourself to equity risk at what appears to be an absurdly low price... a price low enough to not put you out of business, well that's the kind of risk I like.

Get an email alert each time I write an article for Real Money. Click the "+Follow" next to my byline to this article.
TAGS: Earnings | Investing | Stocks | Technical Analysis | Trading | Retail | E-Commerce | Gaming