As far as "Big Oil" goes, BP plc  (BP) , the old British Petroleum, has been well ahead of the others in at least talking up a good game, better than its peers, as far as "going green" is concerned. BP had set goals of being a "very different" company by the year 2030, and exist with a "net zero" carbon footprint by 2050. Sure plenty of corporations are setting such goals, and all of "Big Oil" has started talking that game, but BP has clearly, in my opinion... been out front. I am only long two oil stocks even as commodity prices (especially energy commodity prices) rise. I am long BP for the reason mentioned above, and long Exxon Mobil (XOM) for the dividend as that firm now appears to be on its way toward transitioning into something greener whether it wants to or not.

BP announced on Tuesday morning that the firm would pay $220 million to purchase 9 GW (gigawatts) of solar projects in the U.S. from 7X Energy. These assets are not currently producing solar power, but increase BP's total pipeline of renewable energy projects to 23 GW. The firm had set goals of increasing net developed renewable generating capacity to 20 GW by 2025 and to 50 GW by 2030. The firm expects to generate returns of 8% to 10% from these projects that are located in 12 U.S. states. The firm has already had a goal of reducing oil and gas volumes by 40% by 2030.

In addition, BPO also announced the entry into the Greek solar market yesterday (Monday) in a deal that would have (Italian energy firm) Eni (E) take over BP's assets including the 45.9% stake in the Amenas natural gas plant in Algeria, and BP to perhaps take a stake in several of Eni's global assets, including the liquified natural gas operation in Mozambique. BP's U.S. and Greek assets will be run by Lightsource BP, Europe's largest solar developer and majority owned by BP PLC.

Readers may recall that better than a month ago BP posted adjusted Q1 EPS that shocked to the upside on revenue that not only decreased some 42.1%, but disappointed at that. Operating cash flow increased dramatically to $6.1 billion, as net debt dropped off impressively (a $5.6 billion reduction) to a still daunting $33.3 billion.

The firm also committed to returning at least 60% of surplus cash flow (define surplus) to shareholders through share repurchases, using the rest to work on the balance sheet. The firm felt this was necessary as it launched a $500 million repurchase program in order to offset the dilutive impact of the vesting of awards made to employees. In addition, BP pays out a quarterly dividend of $0.315 per ADS (American Depositary Shares), that while cut in half mid-way through 2020, is still good for a yield of 4.8%.

About three weeks later, or two weeks ago, Barclays analyst Lydia Rainforth made BP the firm's new "top pick" among European integrated oil and refinery companies. The gist of the pick is that at these higher prices (oil at greater than $60 per barrels)... "The aggregate cash flow of the traditional units is enough to allow BP to ensure competitive cash returns to shareholders, continue to reduce debt and invest in its low-carbon business." 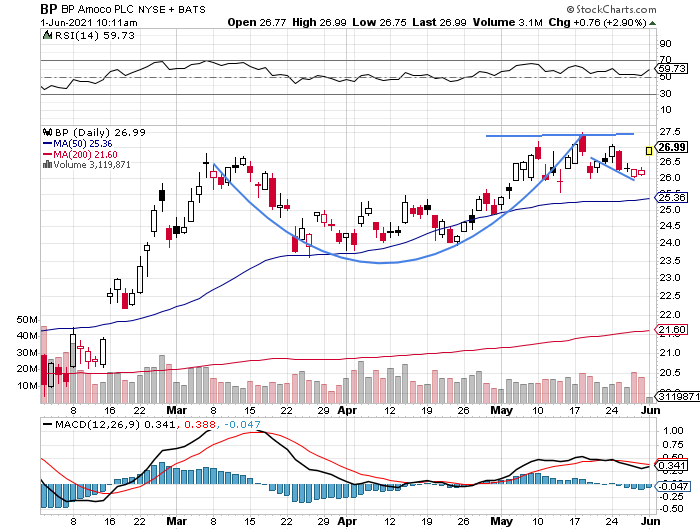 The good news would be that with the shares less than technically overbought, and with a suddenly better looking daily MACD, the shares have gaped higher (just a little gap) on Tuesday morning, making progress toward a $27.50 pivot that could provide for a breakout of this three month saucer and handle pattern. As for a target price, I need to see BP take that $27.50 spot, but if that can be done, $33 (my target) is certainly reasonable, $34.50 possible.

You all know how uncomfortable I get with gaps either up or down, and how I feel stocks don't always but often do revisit those spots. This morning's gap is small and not really fraught with risk. 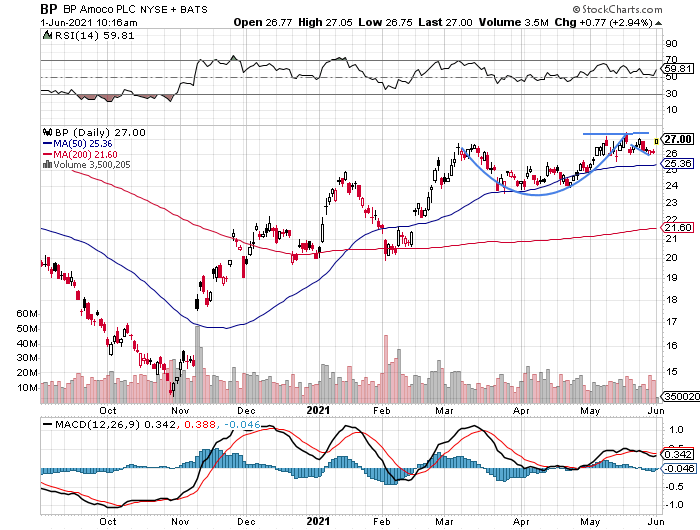 The chart will show investors a smallish unfilled gap in February in the $21/$22 area, and a much more dangerous gap last November between $16 and $18. This is why we have to have a panic point if we are going to be long a name such as this, regardless of how strong certain commodities look as economies reopen and OPEC+ opines on global demand. My panic point for BP is the 50 day SMA, currently at $25.36. Actually I give it until it hits the full ($25) level as the line itself can provide support and then the sale truly would look panicked.

Get an email alert each time I write an article for Real Money. Click the "+Follow" next to my byline to this article.
TAGS: Commodities | Investing | Markets | Oil | Stocks | Technical Analysis | Trading