Some investors... might be wondering why, after two and a half years, Apple (AAPL) is still so reliant upon supply lines buried deep inside a nation that is still fumbling its way through an economically inconsistent and quite disastrous Covid policy. I might be one of them.

Social unrest aimed at the communist regime in Beijing has gone publicly visible across many Chinese cities due to oppressive lockdowns that have reduced social freedom and created shortages of food. Bloomberg News broke a story on Sunday night that Chinese farmers are being forced to destroy crops even as Chinese consumers struggle with shortages as with strict lockdowns, there is no way to get these crops to market.

Additionally, non-Chinese corporations have seen business there disrupted. One of those firms is Apple.

Bloomberg News also reported on Monday morning that turmoil and unrest at Apple's manufacturing hub known as "iPhone City" in Zhengzhou is now likely to result in reduced production that could cause a shortfall of an estimated 6M iPhone Pro handhelds this year. An anonymous source also inferred that how deep this shortfall becomes could directly rely on how quickly Foxconn Technology can get workers back to their assembly lines. The situation could get worse.

Readers may recall that Apple and Hon Hai Precision Industry Co, as Foxconn (a Taiwanese company) is known in China, had cut overall iPhone production targets from 90M units to a rough 87M. The facility in focus is where the premium models of Apple's new iPhone 14 are manufactured.

Workers there were offered bonuses to replace workers who had fled the campus during October's lockdown due to a lack of food. These replacement workers are now protesting as they claim to have not been paid the bonuses promised. The whole thing does not reflect well on Apple, Foxconn, or Beijing.

If by "they" you mean well-known Wedbush analyst Dan Ives (rated at 2 stars by TipRanks) who has been pretty close to being an Apple perma-bull in that past... Well, "they" were blunt on Monday morning. Dan Ives wrote that the "head scratching" zero Covid policy in China had reached a tipping point and as protest spread, Apple had been caught in the cross-fire heading into the Christmas holiday period.

Ives estimates that the iPhone shortage could reduce sales by a rough 5% of units for the current quarter, and potentially up 10% depending on what happens in the short-term around that facility.

Ives also states that in many Apple Stores, there are iPhone 14 shortages of up to 35% / 40% of typical inventory for this time of year. Online channels are pushing deliveries into early January in many cases depending on models and colors. Ives still has an "outperform" rating and a $200 target price on Apple stock.

In short, while I liked to be invested in this name semi-permanently, I have traded around the core position and traded it exceptionally well. Not boasting. Believe me, I screw up enough. You probably remember that I'm the guy that gave you Disney (DIS) last year. However, in this name at this time, I am well positioned.

Readers may also recall that in late October, I had written that CEO Tim Cook has "pulled it off again." Maybe not. I did give you a $175 target price for AAPL and I stand by that, as that is my working target. 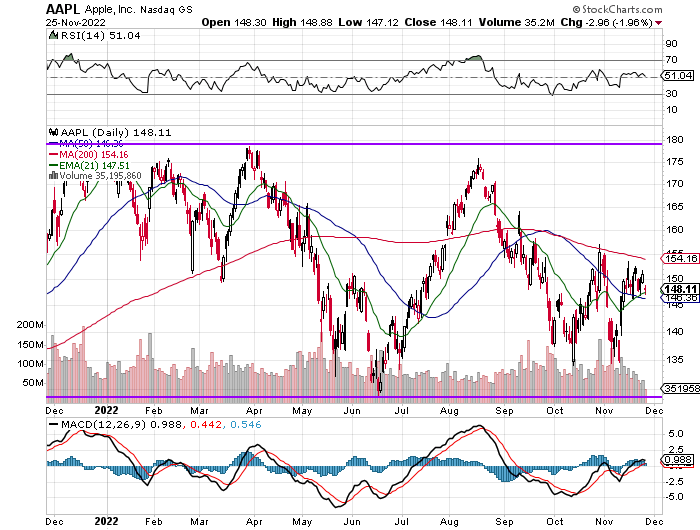 Readers will see that instead of making a run at its 200 day SMA (now $154) as I had thought it might a month ago, the stock will be put in the position of defending its 50 day SMA ($146) this morning. Should AAPL lose that line and not regain it quickly, there are portfolio managers that will reduce long-side exposure.

Get an email alert each time I write an article for Real Money. Click the "+Follow" next to my byline to this article.
TAGS: Investing | Markets | Stocks | Technical Analysis | Trading | Software & Services | Technology | Technology Hardware & Equipment | Manufacturing | China