Fire In The Hole

The group had been hot. Spending on defense had run higher, not just here, but across the developed world for a couple of years. Just as it became apparent that perhaps future Pentagon spending might have to contract as government once again becomes concerned about ever increasing deficit spending, a potential cold war breaks out with China, dressed up as a trade war. The S&P 500 is now up 15% year to date. The defense and aerospace industry? Not bad at all. The Invesco Aerospace & Defense ETF (PPA) has run 29%, the SPDR offering (XAR) , a cool 28%. iShares (ITA) brings up the rear of this trio at 22%. All beating the broad market indices.

This day (Tuesday), the broad equity market teeters just a bit after opening higher. We have spoken of this often as trading volumes were not in my opinion, substantive enough to support the run enjoyed over the past five days or so. As a sector, the Industrials are selling off to a greater degree than are any of the other 10. Within that sector, the Aerospace industry is selling off significantly harder than anything else in the sector. Growth? Rare Earths? An improvement in the prospects for a trade deal with China? A deterioration in prospects for a trade deal with China? Perhaps the $2 billion-plus arms sale to Taiwan is falling apart as trade negotiations advance. Hmm. Let's explore.

One might have expected that after United Technologies (UTX) and Raytheon (RTN) decided to start spending Sunday afternoons together reading poetry that maybe there would be a push to consolidate across the realm of defense contractors. Maybe that's just it. Maybe, although a day after the fact, there is realization that there might not be enough dough around to support this industry where it is, or at least that's the feeling right now. Rotation? Well, when the entire industry gets hit in the teeth like this, without an overtly negative catalyst, yeah.

What Am I Doing Amid The Carnage?

Well, I am pretty active this afternoon to tell you the truth, but not in size. These look like sale prices, but as my friends who also trade this group well know, selloffs in this space can last... and last. Today is a good example why I rarely (almost never) buy or sell an entire position in one transaction. Incremental trading might not necessarily win championships, but it surely keeps me in playoff contention.

If you follow me often, then you know that Lockheed Martin (LMT) has been my flavor of the season. That stock has run nicely, was just awarded a $1.8 billion contract for F-35 fighter aircraft by the Pentagon. I am up quite a bit on a nice sized long position in LMT, and a 2% haircut does not scare me off that easy. That one, I watch for now.

Raytheon and United Technologies are a horse of a different color. I have been long RTN for a good while, and that name had just started to perform. I entered UTX is small size on Monday, thinking the idea of spinning off Carrier and Otis might be the play. Twenty-four hours later, that looks like a mistake. That said, it's small and I will likely add a similar amount. This illustrates exactly my point up top. Northrop Grumman (NOC) looks interesting below $300. That firm just landed a $958 million ground-air radar contract. I do not have a position currently, but this is my second favorite name in the space right now. General Dynamics (GD) makes the M-1 Abrams tank. Taiwan was looking to buy 108 of those. This might be a tough name to enter right now if not already there.

Last Monday, Kratos Defense (KTOS) landed a $31.8 million award from the U.S. Air Force to provide 35 target aircraft for training purposes. The next day, Goldman Sachs downgraded the name to Neutral from Buy, but upped their target price from $22 to $24. In all fairness to Goldman, their original target price had been met. That was a nice call. I am long 50% of my original position in this name having jettisoned 50% above my target, which was also $22. I am not adding here.

Mercury Systems (MRCY) is another defense electronics type name that I trade. The stock has had a great 2019, but has faded after peaking in early May, and then bringing 6 million shares to market in a secondary offering on May 23rd. If the UTX/RTN deal makes any smaller defense name attractive, it might be this one, as a defense tech play. I have other names in mind, but I am long this name, about 25% of a position, so I probably should not opine on that. I like this one enough to add at a discount. 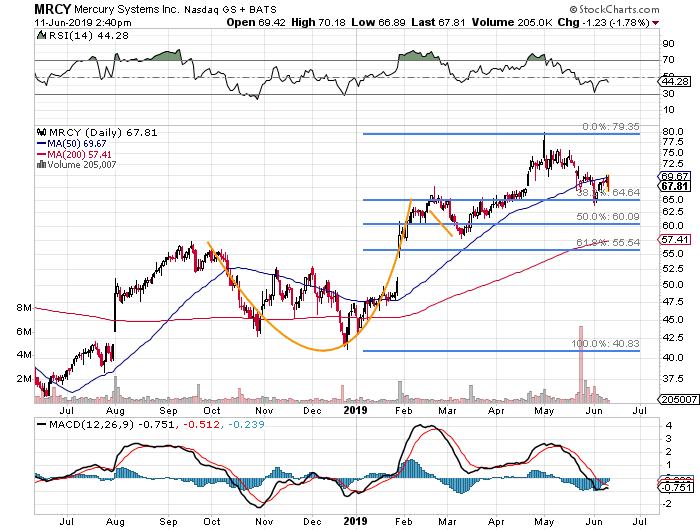 Most analysts will likely see the cup formation (orange), some might see the handle. Fewer will recognize that since coming out that pattern, the name has traded almost with precision as out twelfth century Italian mathematician friend would have had it.

Note: $68 was where the right side of the orange cup peaked. This area could prove funky. Okay, in my opinion to add there with the understanding that the door could swing from there, in either direction. I save dry powder for $64 just in case.

Get an email alert each time I write an article for Real Money. Click the "+Follow" next to my byline to this article.
TAGS: Investing | Markets | Stocks | Technical Analysis | Trading | Defense