Anzalone explained that Arrowhead is pioneering gene therapies developed around the concept of RNA interference, which acts to silence, or turn off, certain genes that are known to cause disease. The company originally focused on just the liver, but is now broadening its scope outside of the liver and is also developing technologies to silence multiple genes at the same time.

Arrowhead currently has big name partnerships with Johnson & Johnson (JNJ) and Amgen (AMGN) to help them develop and commercialize various drugs based off of the company's technology. Arrowhead recently announced a successful trial for cystic fibrosis, for example, that included 110 patients and had no serious adverse events.

Shares of Arrowhead are up 171% over the past year and Cramer continued his recommendation.

In this daily bar chart of ARWR, below, we can see an impressive rally where this stock has tripled in just the past 12 months. Prices are above the rising 50-day simple moving average line and perhaps a bit extended above the rising 200-day line.

The daily On-Balance-Volume (OBV) line is nearly at a new high for the move up telling us that buyers of ARWR have been more aggressive and the movement of this indicator confirms the price gains.

In this weekly bar chart of ARWR, below, we can see that prices have made a tremendous rally over the past three years. (Wouldn't be nice to go back in time and go long in size in 2017?) Prices are above the rising 40-week moving average line.

The weekly OBV line has been in a bull move the past three years telling us that investors have accumulated this stock steadily. The MACD oscillator on this longer time frame is about to cross to the upside again for a fresh outright buy signal.

In this first Point and Figure chart of ARWR, below, we can see a $44 price projection. Bullish but we could reach that level in a few weeks the way this stock has been advancing. 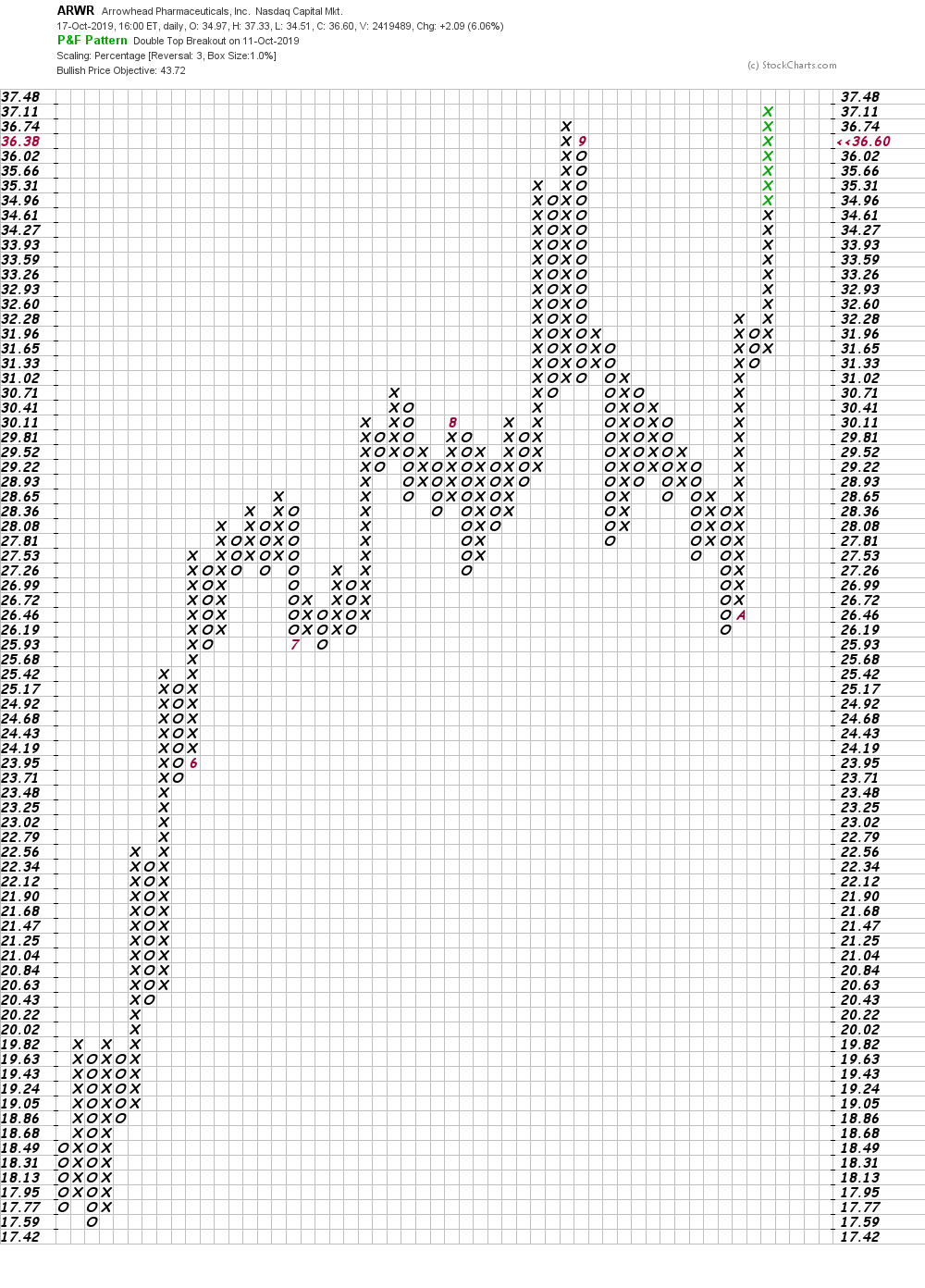 In this second Point and Figure chart of ARWR, below, we filtered out some price action by looking at only closing prices. Here the upside price target is the $54 area.

Bottom line strategy: These four charts of ARWR tell a bullish story just like the fundamentals that the CEO described Thursday night. Traders could go long ARWR if prices go sideways for a day or two. Risk below $30 for now looking for gains to $44, and then $54 in the weeks and months ahead.