In his "No Huddle Offense" segment of Tuesday's Mad Money program, Jim Cramer sounded off against chasing innovation at all costs, a strategy made popular by Cathie Wood and her ARK Innovation ETF (ARKK) .

You can't just innovate for the sake of innovation, you need to also make money, Cramer said. If your company doesn't have a path to profitability, then it's simply not worth owning.

Let's look at some charts.

In this daily Japanese candlestick chart of ARKK, below, we can see that prices have been cut in half in less than four months. Prices are retesting the late January low on lighter volume than what was seen in the latter half of January. A light volume retest or even a slight new low on light volume is a short-term positive. The two most recent candles are a doji and a spinning top - both are a sign of balance between bulls and bears.

The On-Balance-Volume (OBV) line has been in a decline the past four months as traders have voted with their feet. In the bottom panel is the 12-day price momentum study which shows higher lows from early December to January and now in late February. Higher momentum lows tell you that the pace of the decline is slowing. When momentum is compared to the price action we have a bullish divergence - price is declining but the indicator is improving. A bullish divergence can foreshadow an upside reversal.

In this weekly bar chart of ARKK, below, we can see that prices have made a bigger decline since early 2021. Trading volume was very heavy into the January low. In the bottom panel is the slow stochastic indicator - one of many oversold/overbought indicators. The price action is very oversold or extended on the downside. Being oversold is not a good enough reason for me to be a buyer of ARKK.

In this daily Point and Figure chart of ARKK, below, we can see a potential downside price target in the $48 area. 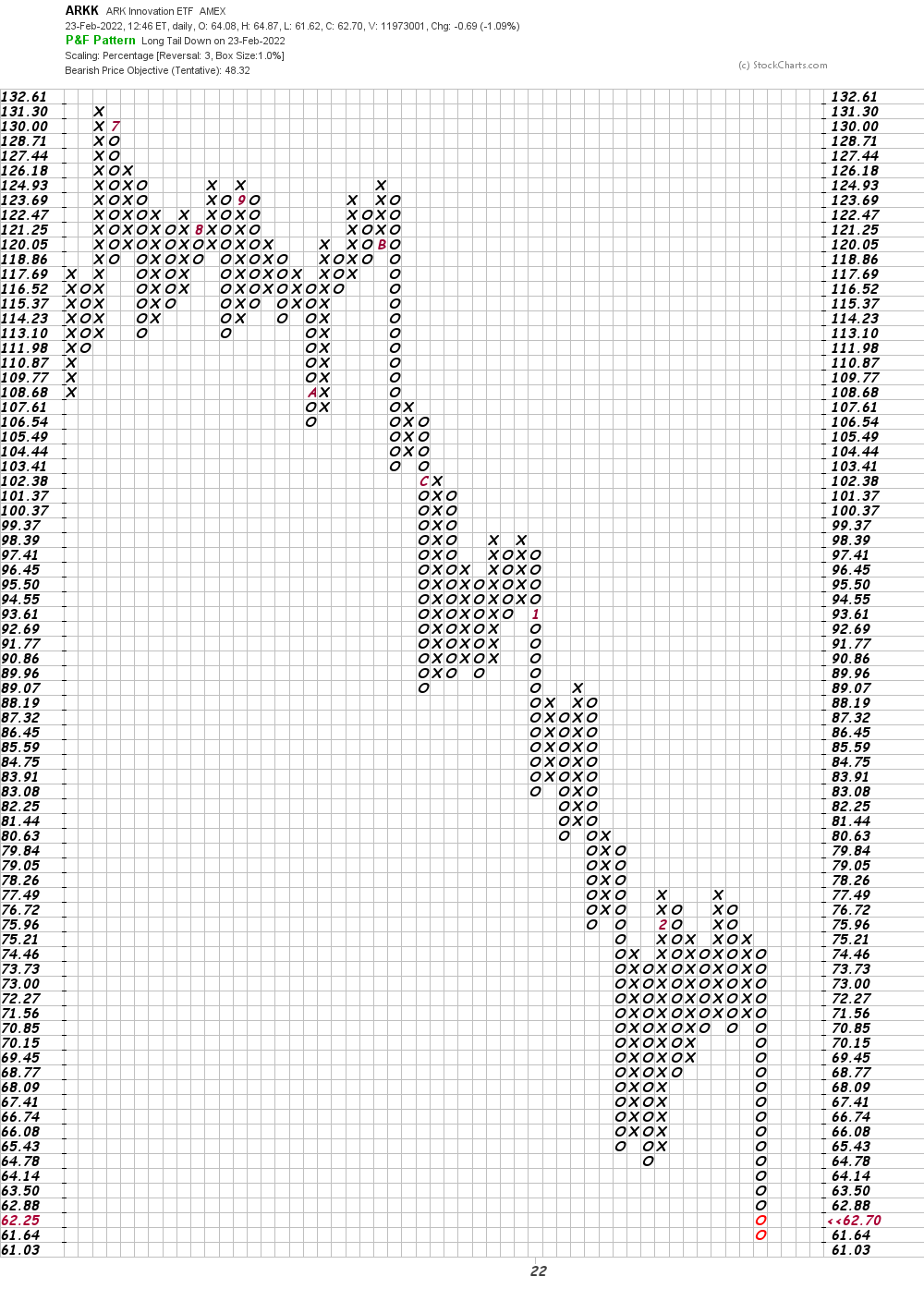 The top holding in the ARKK ETF is Tesla (TSLA)  , so let's check the chart.

In this daily Japanese candlestick chart of TSLA, below, we can see that prices have made a significant decline this calendar year. Prices have just slipped below the 200-day moving average line and made a slight new low for the move down.

The OBV line is still pointed down but the 12-day momentum study shows us a higher low from late January until now - a small but promising bullish divergence when compared to prices.

Teladoc Health (TDOC) is the second largest holding in the ARKK ETF and its chart is interesting. In this daily candlestick chart of TDOC, below, we can see some positive clues - small real bodies, heavy trading volume and a larger bullish divergence than on the chart of TSLA (above).

Bottom line strategy: Aggressive traders who know how to get out in addition to getting in could go long ARKK at current levels risking a close below $60. Prices could rebound back to the $69 area in the short-term. This is just a short-term trade.