Anyone who has ever run a business knows the feeling. The elation that comes after landing a large client capable of providing recurring revenue. So good that one revises projections for future months over and over again just to make sure they are correct. After a short while, other feelings seep in. What if I lose this client? What if this client goes elsewhere.

Arista Networks (ANET) CEO Jayshree Ullal is going through expectations of reduced business from a large client going forward right now. The firm reported a very solid third quarter on Thursday evening. The shares are trading lower then where they traded as that closing bell rang. Much, much lower.

For the quarter, Arista Networks posted adjusted EPS of $2.69, easily beating expectations, Annual growth of 27%. Revenue printed at $654.4 million, +16.2% year over year, and also above consensus. For those unfamiliar with this firm, Arista is obviously a tech company that provides cloud networking software to internet based companies as well as cloud service providers. The firm also provides networking hardware and support to firms involved in creating next generation data centers. A larger competitor in this space would be Cisco (CSCO) .

Net income landed at $208.9 million, up nearly 24% from the same period one year earlier, while operating expenses grew from $180.8 million to $188.6 million over that time. Gross profit margin contracted slightly to 63.8%, but remained largely stable. Cash provided by operating activities more than tripled over the course of 12 months pushing the firm's cash position appreciably higher. The firm ended the quarter with cash, cash equivalents, and marketable securities totaling more than $2.4 billion. Arista, in my opinion, can easily handle the firm's liabilities for the foreseeable future.

Arista guides fourth quarter revenue to a range of $540 million to $560 million, far below Wall Street consensus of $686 million. Gross margin should remain in the 63% to 65% range where it has long been. The call was tough on Ullal. She had no choice but to be frank as she said, "In Q3 2019 we continued to see the adoption of our cloud networking technology in more diverse environments." She went on, "While we expect a sudden softening in Q4 with a specific cloud titan customer, we are committed to a sustainable and strong foundation of long-term growth, innovation and profitability." Kind of says it all.

Ullal went on to explain that this customer had informed the firm of a shift in that firm's procurement strategy with a material reduction in demand from earlier forecasts for not just the fourth quarter but for 2020.

Investors now have to wonder. Is this issue specific to this "cloud titan" and Arista, or this prophetic of a larger slowdown in the "network refresh cycle" across the software space? This could be why Cisco wobbled a bit overnight, but has largely stabilized this morning. 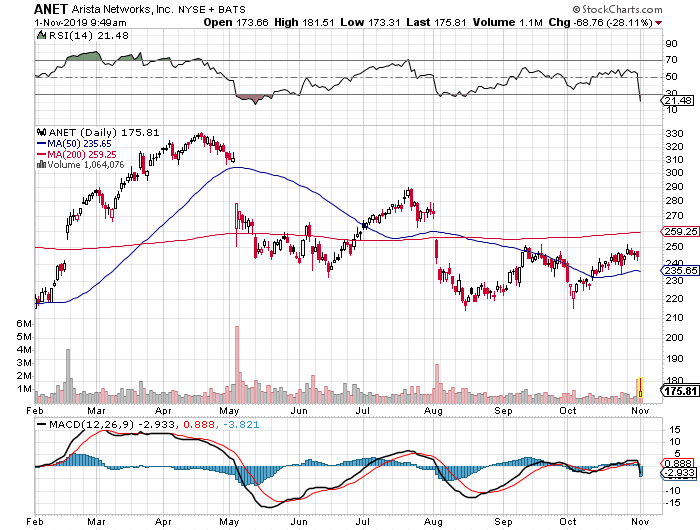 That's going to be one heck of a gap to eventually try to fill. There have been roughly 15 or so analysts that have opined already this day. Most of them are legit four or five star analysts. The rough average of the group has amounted to "hold" ratings, and price target reductions. Samik Chatterjee at JP Morgan went as far as placing a "sell" on the name.

I will be staying out of this one. For those interested, my thought would be to take the bull call spread route going out at least three months in order to cut the risk. The folks still tempted to take the equity route might want to consider Jim Cramer's "three day rule" before taking action.

Get an email alert each time I write an article for Real Money. Click the "+Follow" next to my byline to this article.
TAGS: Earnings | Investing | Options | Stocks | Technical Analysis | Trading | Analyst Actions | Stock of the Day