Big Blue. The New York Football Giants? No. Whaddaya think? I don't know. They've fooled us before. International Business Machines (IBM) . The stock market poster child for over-promising on growth driven by strategic shifts in corporate initiative only to under-deliver where it counts... in results. This time it's different? This time it just might be. Enough to buy the shares? Well, if we're wrong, at least there is that handsome looking dividend. They do pay you to hang around. These shares are up more than 4% this (Wednesday) morning. Huzzah. These shares are notably lower since the year 2012. The year Ginni Rometty took over as CEO. That's a lot of hanging around. Let's get after it.

IBM put the firm's fourth quarter performance to the tape on Tuesday evening. The results, in spots, showed promise. At the headline level, IBM reported adjusted EPS of $4.71, a mild beat on revenue of $21.78 billion, also a mild beat. The potential for this turnaround begins with that revenue number, as this print represents year over year growth of 0.1%. So what, you say. I say... This is the very first sales number to compare to the year prior without minus sign attached since Q2 2018. I kid you not. That matters. This could very well mean that Rometty has finally turned momentum. Let's look inside.

The most important segment would now be (as the largest) Cloud and Cognitive Software, having passed Global Technology Services as the two segments move in different directions. Cloud and Cognitive Software includes transaction processing as well as the firm's cloud/data platforms. Yes, that by extension includes the Red Hat ($34 billion) acquisition. The unit posted sales of $7.24 billion, +9% and above consensus expectations of $7.12 billion. Cloud revenue in composite landed at $6.8 billion, +21%, while more specifically Red Hat driven revenue sported a $1.07 billion tag, +24% after being normalized for historical comparability.

As for guidance, IBM now expects the firm to be able to show adjusted EPS of $13.35 for fiscal 2020, above the $13.29 that Wall Street had been looking for. This would, if realized, amount to 4% annual growth. The firm also looks for free cash flow of $12.5 billion.

Ever see, or better yet feel a large ship of the line change direction? It all starts with a change in momentum that feels torturous at the time. Then, once turned in a new direction, the engines work really hard before any speed of movement becomes perceptible. The fact here is that IBM has made expensive investments in what is growing, and in what provides higher margin in this version of our world. The ship has turned, and the engines are pumping away. The seas my be rough. Amazon (AMZN) , Microsoft (MSFT) , Alphabet (GOOGL) , Oracle (ORCL) , and others all compete in the space. The ship, however is pointed the right way. Oh, and did I mention that they pay you to hang around? 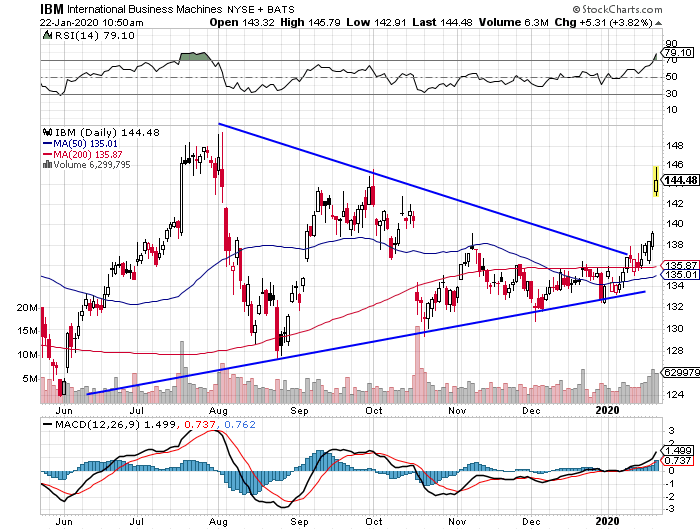 You kids know what happens when a series of declining highs runs into a series of higher lows, right? Kaboom. An explosive movement one way or the other, at least often enough. That's what you are seeing today. The shares need in my humble opinion to take and hold above the $146 level to sustain this move. Otherwise our move off of the closing triangle will likely present more like a flat base next time we look at it. The good news is that basing patterns are usually quite tradable. Did I mention that they pay you just to hang around.

Get an email alert each time I write an article for Real Money. Click the "+Follow" next to my byline to this article.
TAGS: Dividends | Earnings | Investing | Stocks | Technical Analysis | Trading | Software & Services | Technology | Stock of the Day