Let's review the background of the 1970s and then fast forward to today.
I graduated from university in the spring of 1973, with a double major in economics and finance and tried to land a job on Wall Street. Unfortunately, it was during the gut wrenching and very destructive 1973-74 bear market. This first job offer that I got was to work for a commodity consulting firm in the art deco Chanin Building at 42nd and Lex. For me, it became the center of the universe for the next three years.
I lived through and charted commodity prices and production and consumption figures for the next three years. I saw firsthand what news moved the markets and what didn't. I saw the fallout from Nixon's Wage and Price controls that were imposed for 90 days and then lasted more than 1,000 days. Currencies began to float and the dollar weakened. Black markets for some things developed while some items that producers could not recapture their costs and make a profit on were not produced. There was a confluence of events that contributed to rising prices.
The Peruvian anchovy population was heavily fished and collapsed during the warming of the 1972 El Niño. This created a shift in demand for soybean meal for animal feed. Soybean prices soared. The wheat crop in Russia was toast and wheat prices surged higher. Sugar production sank and prices went from 6 cents per pound to 66 cents a pound and housewives became hoarders. There was a freeze in Brazil that hurt their coffee crop and a freeze in Florida and Georgia that devastated the U.S. orange juice crop. OPEC was born and crude prices soared. Remember the Odd-Even days to gas up your car? Unions pushed for and got COLA clauses in their new contracts.
It was a crazy time.
Today may be another crazy time in financial history.
It is now 2021 and some strategists are declaring we are in a new secular bull market for stuff. Certainly we are seeing production problems for some commodities. Palm oil for one. Soaring prices for much in-demand rare earths. Spikes in lumber prices. A recovery in the price of oil after it briefly went negative. Copper prices and a number of base metals have also been quite strong and have attracted attention. New mine production has always been slow to adjust, but now concerns about the environment and permitting could add years to development of new supply sources. The recent logistic problems with toilet paper, chicken, beef and other supermarket staples have created a new generation of potential hoarders as buying from hand to mouth can mean finding nothing on shelf. Global warming (whether you believe or not) could impact crops around the world in the season's ahead.
Let's look at a couple charts.
In this weekly bar chart of the Invesco DB Commodity Index Tracking Fund ( DBC)  we can see that prices have been in a downtrend from 2008. Prices are trading above the rising 40-week moving average line but we have yet to establish a higher high with a move above the highs of 2018.

In this weekly close only Point and Figure chart of DBC, below, we can see a bullish upside price target in the $24 area. 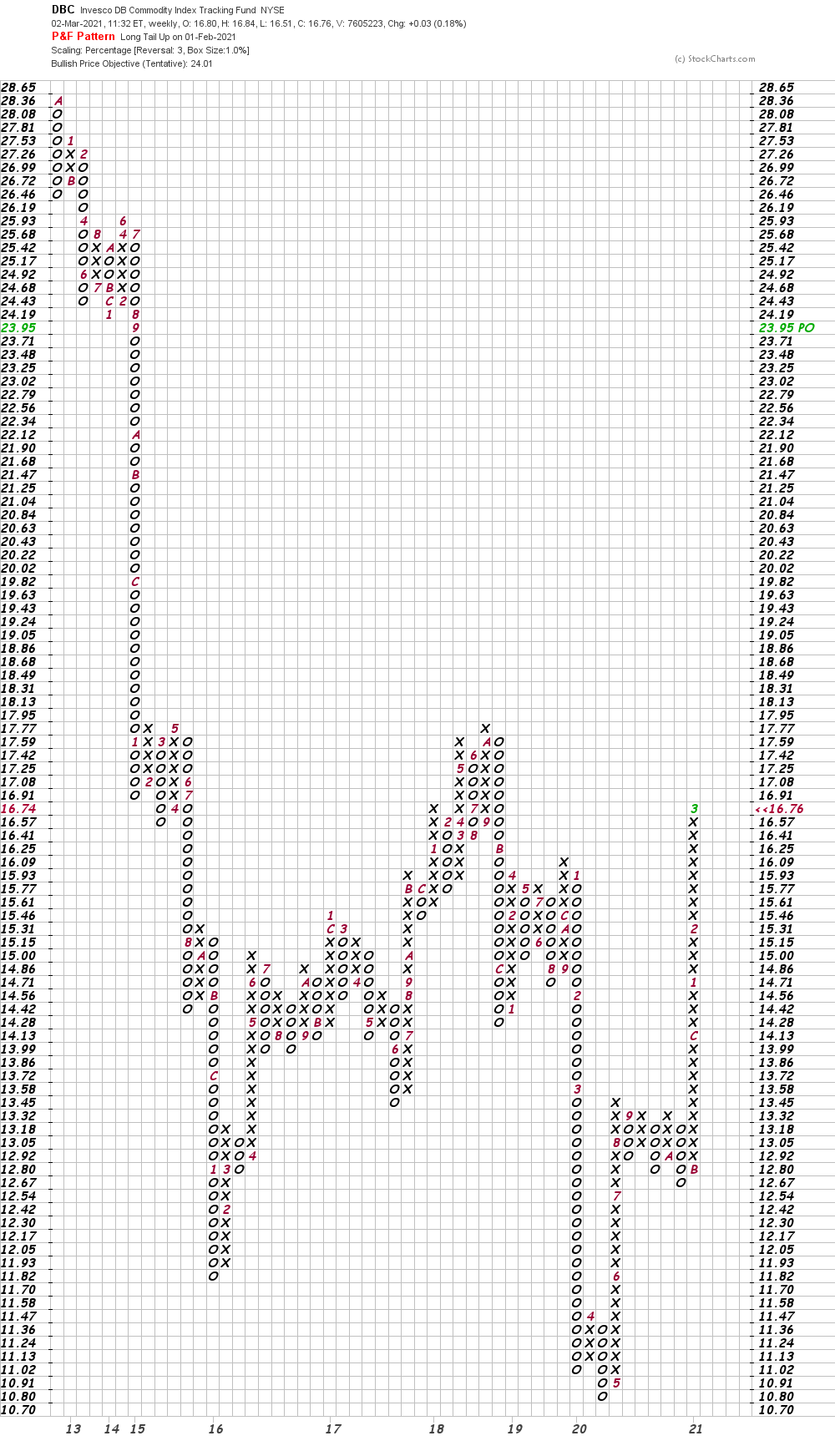 In this second weekly close only Point and Figure chart of DBC, below, we used a five box reversal filter and here a price target of $32 is being projected. This would take prices back to the highs of 2011. 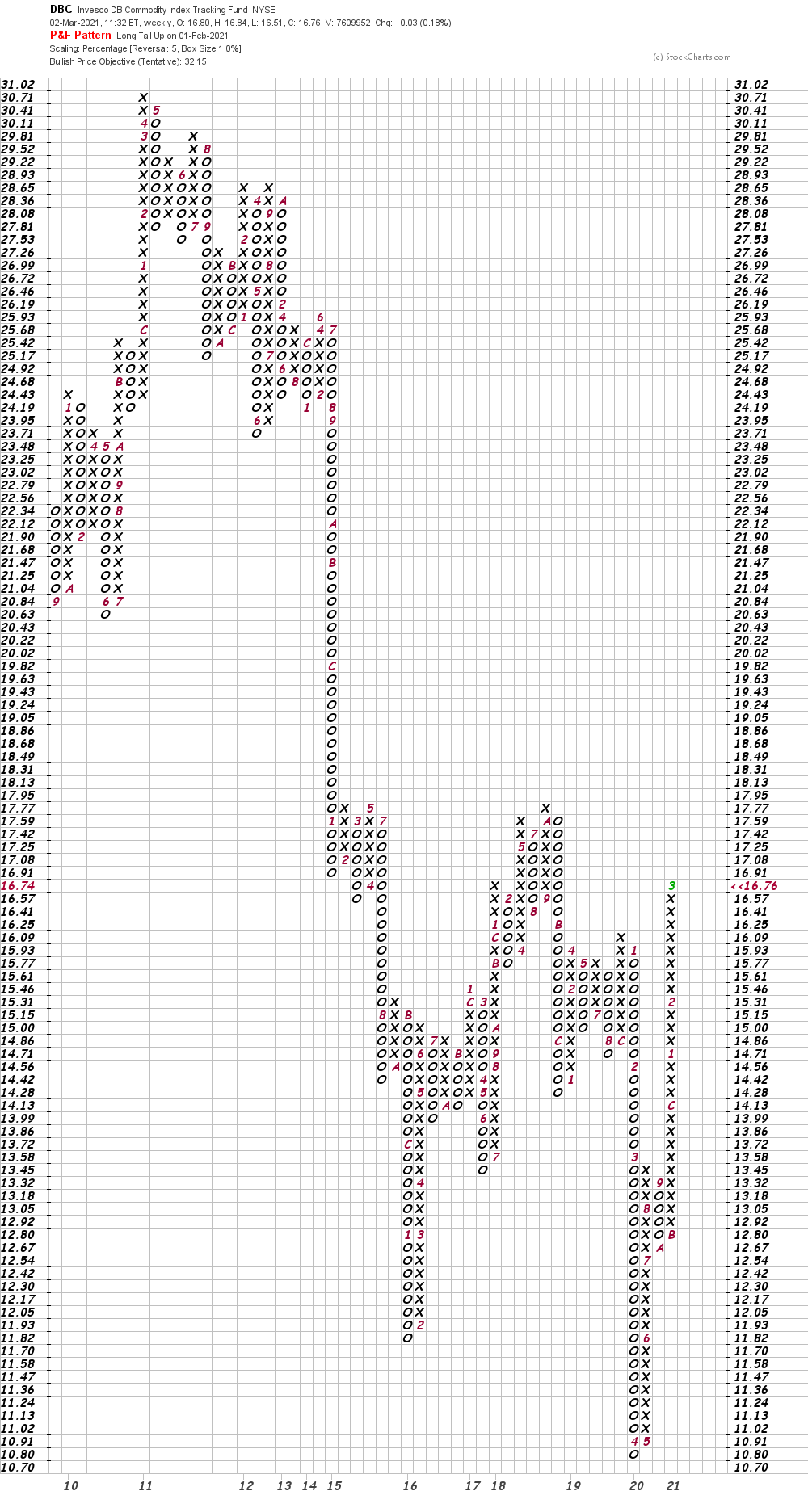 In this weekly copper futures chart, below, we can see that prices have broken out of a large double bottom pattern.

And we include this chart of silver futures for those Robinhood traders:

Bottom line strategy: Most of the time commodity bull markets start with a supply shock, but maybe this time around we have both some supply problems plus demand surging from an expanding global middle class that wants more things. Food for thought. (Maybe hedge your bets with a large pantry in your next house.)
Get an email alert each time I write an article for Real Money. Click the "+Follow" next to my byline to this article.
TAGS: Commodities | Investing | Technical Analysis | Materials | Metals & Mining | Agriculture |