"I love the quarter. That quarter is excellent and this one is buyable," Cramer responded.

Let's check out the charts of AMAT, which is a holding in the Trifecta Stocks portfolio.
In this daily bar chart of AMAT, below, we see a positive situation, if you believe in chart patterns. AMAT shows us higher lows from March, and this tells us that demand for the stock has been increasing. We also see that prices have stalled a number of times in the $140-$145 area and that zone of price could be considered supply.
Once the supply in the $140-$145 area is overcome by aggressive buying we should see the price of AMAT go much higher. Trading volume has declined during this chart pattern and that is typical for ascending or bullish triangles. Prices are probably three-quarters or more through this pattern, so we should be on guard for an upside breakout. The On-Balance-Volume (OBV) line has been steady and is close to making a new high. The Moving Average Convergence Divergence (MACD) oscillator is just slightly below the zero-line and poised for a cover shorts buy signal.

In this weekly Japanese candlestick chart of AMAT, below, we can see the same triangle pattern going back six months. The rising 40-week moving average line is bullish and the weekly OBV line is positive. The MACD oscillator has been pointed down since May but we are on alert for any narrowing of the two averages that comprise the indicator.

In this daily Point and Figure chart of AMAT, below, we can see a tentative upside price target of $150. If reached, this will be our upside breakout moment. 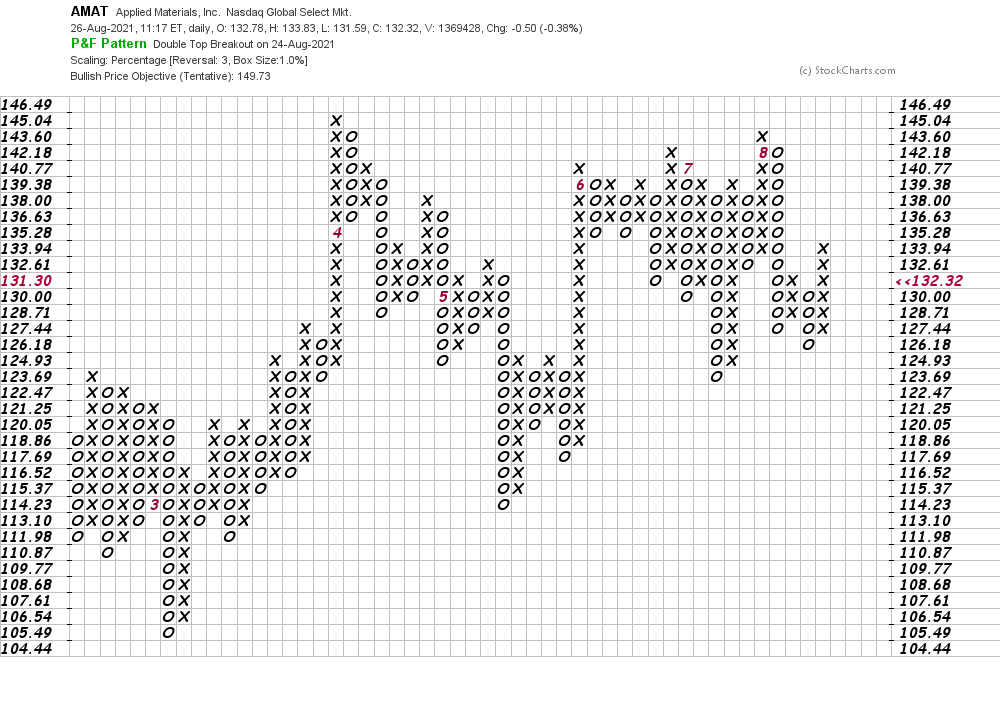 In this weekly Point and Figure chart of AMAT, below, we can see that the software is projecting the $184 area as a price target.

Bottom line strategy: In our May 26 update, we recommended that "Traders who were stopped out could rebuy AMAT on a dip towards $130. Risk to $121. The $176 area is our price objective." Hold those longs and consider buying more on strength above $150. Our price target for now is the $176-$184 area.
Get an email alert each time I write an article for Real Money. Click the "+Follow" next to my byline to this article.
TAGS: Investing | Technical Analysis | Semiconductors & Semiconductor Equipment | Technology | Mad Money