Going into Apple's (AAPL) earnings, with the stock around $200, I was looking for a $20 move although not necessarily on the initial reaction. Shares moved from $200 to $215 but hit a wall, a Trade War Wall. I don't think the issue is simple enough to define it in that manner. The correlation to the S&P 500 and the Nasdaq is worth noting. For the past year, the correlation with the 10-week S&P 500 simple moving average (SMA) has been strong for the past six months and getting stronger. Where the market goes, so goes Apple. Some might even argue it is the opposite, but despite its size, macro is still driving the bus.

Apple lost keep support last week. The gap lower to kick off the week now puts Apple traders in a tough spot. Support sits around $180 with resistance around $196. That places us halfway between each. Unfortunately, the current setup echoes the October technicals which led to a big move lower as the stock dropped from $220 to $145. I don't see the low being tested, but $165-$170 appears a real possibility. Bulls need to find support quickly. An additional challenge is the lower high now in place on Apple.

The Trade War has the potential to change all of this. A strong market rally and Apple will likely pop back to $196-$200. That's the problem. It's become tethered to the market and a bearish or volatile move will make it worse. In sharp selloffs, crashes, and corrections, correlations tend to accelerate towards one. Many market advocates will want to point to something specific around Apple for its current weakness, but until we see the stock acting independently from the market, what Apple does may not matter.

Apple grabbed a key player from Intel (INTC) , the head of development working on modem/5G tech. The logical conclusion here is Apple will press forward with its own 5G development. The sting of the deal with Qualcomm (QCOM) is fresh, so the move should not be seen as a surprise; however, the recent warning from Intel isn't helping tech. Although it would be a stretch, don't put it past bears to make some link that Apple is making a desperation 5G move here and grabbing talent that wasn't able to propel Intel recently in the 5G race because it is a race Apple is losing.

The bears will also focus on the conservative sequential Q3 iPhone revenue decline after the company experienced the worst decline in Q2 history. I tend to side with this given the negative sentiment that will likely be pushed in China the longer tariffs and Trade Wars continue. The decline in stock price should cause Apple management to get hopping on the $75 billion incremental share repurchase. Add in the yield now approaching 1.5% and we'll see interest from blend investors. 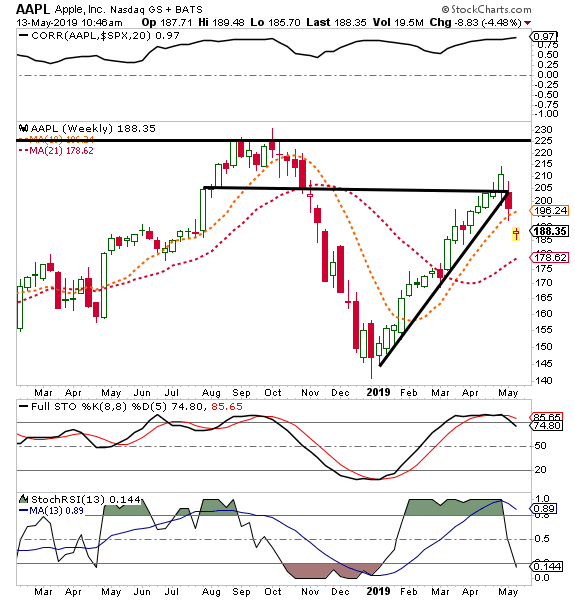 Overall, I don't see Apple as an "independent" story here. We note it as the stock of the day, but it is more the stock that most represents the overall market. It's shaping up to be a very long summer if both Apple and the overall market don't find stability in the next two weeks.

Get an email alert each time I write an article for Real Money. Click the "+Follow" next to my byline to this article.
TAGS: Investing | Markets | Stocks | Technical Analysis | Trading | Technology | Telecommunications | Stock of the Day