Remember that one? Honestly, how could you? I don't remember articles written by other authors beyond their usefulness. Nor should you. I guess. What I am saying is this. I write often. I mention Apple (AAPL) often in Market Recon, my flagship column. Now, as I sit at my desk preparing to cover this name for Real Money, I am wondering when is the last time I devoted an entire column to the name? I had to look it up. October 31st, in response to the firm's fiscal first quarter results. The title of my first segment that day? Commitment to Excellence. Ring a bell now? Maybe if Kenny Stabler is your football hero. This time, however, I refer to Tim Cook.

The success story of that quarter reported in late October was one of growing margins across the Apple Services space, where there is the gold mine of recurring revenue across the installed base provided by hardware loyalists, even if that means ultimately less of a reliance upon traditional consumer hardware sales. That said, the holiday season has brought about the blowout success for the firm's wearable products such as AirPods and the Apple Watch.

Revenue for that first quarter printed at year over year growth of 1.8%. Currently Wall Street sees full year revenue growth for Apple of 10% for 2020, and beyond that 14% growth for 2021. Clearly, the stock's performance is more based on growth in valuation multiples than in sales growth, as the stock now trades at more than 19 times these forward looking earnings, up from what? 12 times not that far back.

Yes, this expansion in valuation has been seen across the entire equity market, but it's more than that. Of course the higher margins in recurring revenue businesses such as Apple Music, the iCloud, Apple Pay, the Apple Card, Apple Arcade, Apple News, Apple TV, and TV Plus, as well as Apple Care (Health Care) are in different stages of development. Apple is at the core, for me personally, at the very center of my 5G technology trade. That trade at least for this guy would also include Marvell Technology (MRVL) , Verizon (VZ) , AT&T (T) , and I still have exposure to Cisco Systems (CSCO) .

More than 40 industry analysts cover Apple. Don't worry, I did not survey Wall Street in its entirety. Over the last seven days, four analysts rated by TipRanks as "five star" analysts stated some kind of opinion. Let us take a look at what those few have said in recent days.

Probably the highest level of media coverage went to Daniel Ives of Wedbush. Ives maintained his Outperform rating, while taking his $325 target price up to a "street high" of $350. Ives wrote, "We believe iPhone 11 is just the front end of this current 'supercycle' for Cupertino with a slate of 5G smartphones set to be unveiled in September that will open the floodgates on iPhone upgrades across the board that the Street continues to underestimate."

Piper Jaffrey's Michael Olsen maintained his Outperform rating, as he increased his price target to $305 from $290. Olsen cited an internal survey that showed 23% of respondents would be interested in purchasing a 5G iPhone even at a price point of roughly $1,200. Olsen sees this as a potential indication that FY21 estimates "could prove low."

Jim Suva of Citigroup maintained a Buy rating on AAPL with a $300 price target. He believes that consensus estimates under-appreciate demand strength for the Apple Watch and AirPods. Suva expects wearables could drive more than $10 billion in quarterly sales for the firm.

To keep it balanced, not all four of these analysts were quite as bullish, Toni Sacconaghi did have some positive things to say about AirPod sales for 2019, as well as his expectations for 2020, forecasting 85 million units sold. However, Sacconaghi has a Market Perform rating on share of Apple and a below the street price target of $250. 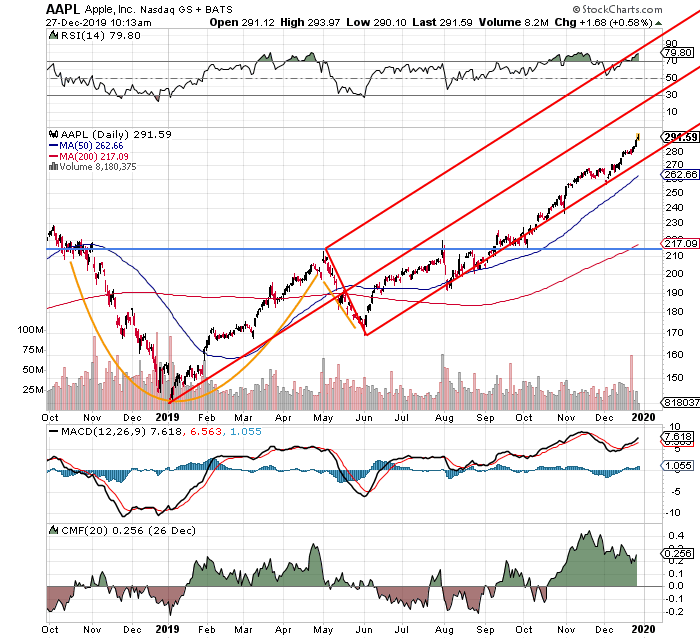 If this chart looks somewhat familiar, that is because it is an updated version of the chart I drew up for you back on October 31st. The trend is unchanged. I left the cup with handle that led to my earlier price target of $258 on the chart for context. Readers will likely pick up on the fact that Relative Strength, Money Flow, and the daily MACD all scream caution at this level. What does Jim say? "Own it, don't trade it." Over almost any time frame, Jim is right.

What I see is a stock that has simply taken a ride on the lower trend line of our Pitchfork model since May, without even approaching the central trend line since late July. That's where I get my current target of $310 from. Conversely, I can not add at this point on the chart, and would not consider doing so unless I saw the lower trend line tested. Should that spot break, there will be some traffic on the way down that could lend support as the 50 day SMA has been playing catch up since the summer. That $263 level would be my current panic point.

Get an email alert each time I write an article for Real Money. Click the "+Follow" next to my byline to this article.
TAGS: Investing | Stocks | Technical Analysis | Trading | Software & Services | Technology | Technology Hardware & Equipment | Stock of the Day

As we meditate on the charts of ASAN, we see the underlying technical risks.

Here's what to avoid.