The good news is that many of you reading this missive are already long some equity in Apple (AAPL) . For the rest of you, even better news would be that if you have any kind of retirement fund, or invest solely in a passive way without paying very close attention, that you too, have some exposure to the name.

Apple reported the firm's fiscal fourth quarter financial performance on Wednesday evening. I had been a little nervous coming into the event long the shares, given how song they have been in October. I have never been comfortable riding a hot name into earnings without at least taking some kind of a haircut prior to release. Did not shave the position this time, though the impulse was there. Had a hunch. Too many up days on building volume over weeks. Too many bullish analysts whose opinion I respected.

The firm posted EPS of $3.03, comfortably beating expectations. Revenue of $64.04 billion grew just 1.8% year over year. Just 1.8%? That growth was indeed the best annual growth rate that the firm has seen for any quarter since last year at this time. The number also beat consensus by more than a cool one billion dollars. In a quarter thought to be a place holder in between a glorious hardware-centric past, and the developing services based business lines, not to mention the coming 5G environment, CEO Tim Cook is to be congratulated. Readers will see that the firm is executing at a very high level across almost all business lines. They used to have a term for this... "Commitment to Excellence."

Products produced sales of $51.529 billion, down 1.4% from the same period last year, but beating Wall Street's consensus. iPhone sales printed at $33.362 billion. Down 9%? Yes. Better than expectations though given that for the firm's top selling line of products, the iPhone 11 was supposed to be an "in between" offering that has ended up selling better than thought. Mac sales did disappoint, but that is not where Apple shareholders look for growth.

Shareholders look for growth in Wearables, Home and Accessories, iPad sales and the service based eco-system. More on services in a bit. iPad sales grew 17%, while Wearables, etc., ramped 54% higher. That's the Apple Watch, AirPods, and all Beats products. Those who either read or listened to the call would learn that more than 50% of iPad purchases were new to the product, while roughly 75% of Apple Watch purchases were made by those new to that product. These type purchases increase the size of the Apple ecosystem, which in turn grows potential for service related sales. That's a higher margin business that brings with it a higher multiple.

Now, this is key. Service driven revenue hit the tape at $12.511 billion, above expectations and good enough for 18% annual growth. What's inside this segment? Pretty much everything that is not hardware. Apple Music, Cloud Services, Apple Pay, the Apple Card, Apple Arcade, Apple News, the App Store, App Store advertising, Apple Care, and soon to be Apple TV Plus. The headline here is in gross margin. For the firm, gross margin for the quarter came in just below 38%, right in line with guidance. Broken out though, for products, gross margin printed at 31.6% and slowing, while for services, gross margin now runs at a mammoth 64.1% and accelerating.

That is simply key because in the call, the point was made that services now provides a rough one-fifth of total revenue, but about one-third of gross margin. I am interested to see just how much pressure the launch of that Apple TV Plus streaming service places upon the upward trajectory of this gross margin.

The firm now guides Q1 revenue toward a range spanning $85.5 billion to $89.5 billion and gross margin at 37.5% to 38.5%. In both cases, the midpoint would be above consensus. Investors must understand the following. Apple ended this quarter with cash, cash equivalents and marketable securities totaling $206 billion, versus total debt of $108 billion for a net cash position of $98 billion. The firm has made no bones about becoming net cash neutral.

Working toward that aim, Apple spent $18 billion repurchasing it's own shares over the three month period n the secondary marketplace. That was good for 86 million shares, reducing the diluted share count by 7%. The firm produced a rough $59 billion in free cash flow for the quarter. What this means to you, in my opinion, is that the firm might be expected to continue this level of aggression in returning capital to shareholders. On that note, Apple just declared a $0.77 quarterly dividend to be paid out on November 14th to shareholders of record on November 11th. That comes to an annual payout of $3.08, good for yield of 1.27%. 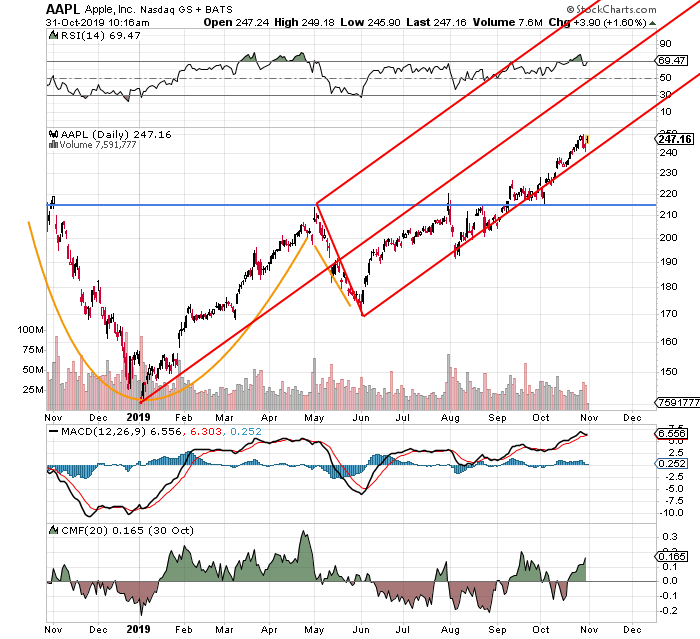 Remember this chart? That Pitchfork continues to work it's magic. It was just a week and half ago that I lifted my target price for AAPL from $240 to $258, while making a case for prices that could go as high as $269.

I am not going to change that target price at this point as the shares now border on being technically overbought, though we have heard from at least 10 five star analysts this morning and my target is nowhere near the higher targets among them. Though I stand by my target, I would need to see the shares approach the 50 day SMA at $225 to consider adding equity. In other words, I need to see Relative Strength back off of that 70 level, and test the lower trend line of the Pitchfork.

Get an email alert each time I write an article for Real Money. Click the "+Follow" next to my byline to this article.
TAGS: Earnings | Investing | Stocks | Technical Analysis | Trading | Consumer | Stock of the Day