Let's talk Apple. If it seems to you, that least on the surface that we who write about, talk about, and actually both invest in, as well as trade the stock of Apple (AAPL)  , spend an awful lot of time on the name, you'd be correct. You'd also be correct if you thought all of the coverage was probably warranted. It was not so long ago that I wrote you and said that if the shares somehow reached my target range (at the time) of $258-$269, that I would take some off (and I did). The shares have not traded below their own 50 day simple moving average for anything more than a couple of days since early June. The 50 day SMA stood at $194 at that time. These shares closed on Thursday night at $309.63. That's almost 60% in half a year, for a (very) widely held multi-mega cap name.

The firm's move toward focusing on growing their newer businesses that garner a higher valuation versus core businesses that had not, but could still be drivers for capitalizing on a massive already installed user base has been the wildest of successes seen in modern corporate history in terms of shifting gears in terms of strategy. New price target? Already have one, no two.

Would again, but I can't find the "infinity" symbol on my keyboard. The other day, I named Advanced Micro Devices (AMD) CEO Lisa Su as the "coolest" of CEOs. That said, Tim Cook certainly makes the short list. It's that simple. You make me money, you're cool.

I'll just go back to Wednesday of this week. That day, Apple released an update on the firm's businesses on their own website. Apparently, App Store customers had spent $1.42 billion just between Christmas Eve and New Year's Eve (+16% y/y), and then tacked on another $386 million on New Year's Day alone (+20%).

Before that day was out, Wedbush analyst Daniel Ives reiterated both his Buy rating as well as his $350 price target, citing upside demand for the iPhone 11 in both the U.S. and China that would provide strength into the 5G upgrade cycle later in the year. Ives also mentioned the "eye-popping" performance of the AirPods line that would lead to "clear upside" come fiscal Q1 numbers on January 28th. It did not take long for Gene Munster of Loop Capital to chime in. Munster, a long time bull in the name, sees further multiple expansion as a result of the publicized app store sales.

Thursday? Not much. Just that reported iPhone sales in China backed up what Daniel Ives had told us a day earlier. December iPhone sales in China printed at 3.18 million units, up 18.7% from December 2018. Clearly, the trade war/truce was not an obstacle for Chinese demand, neither was the fact that Apple has not yet released a 5G compatible product and will not until September.

Back to the analyst community. Still Thursday... Kyle McNeely of Jefferies, sticking with his Buy rating, takes his price target up to $350 from $285, matching the industry high at Wedbush. McNeely cites both foot and web traffic, mentioning specifically the strong Black Friday performance. Want to hear from someone maybe not as excited as the rest? Okay, we're balanced here at Real Money and Real Money Pro. On Friday morning, Bernstein's Toni Sacconaghi reiterated his Market Perform rating as well as a "downside" $300 target price (that he had just gone to this past Monday from $250).

Services Segment... let's go through the list, Apple Arcade, Apple Card, Apple Pay, Apple TV+, Apple News+, Apple Music, iCloud, and the App Store round out the line-up. Well, we know that Apple News just hit 100 million monthly active users, +17.6% y/y. The App Store hosts more than 500 million visitors across 155 different countries on weekly basis. I have high hopes for the Apple Card in cooperation with Goldman Sachs (GS) . Weaning consumers already comfortable with iTunes toward a subscription model such as Apple Music could take time, but that is the future of that business. The Apple Pay concept plays well to the eco-system. Apple TV+ will be an expense funded through cash flow generated elsewhere for the time being. Content remains an issue, which is not the reason, but a reason for my interest in being long ViacomCBS (VIAC) this year, as at least a dealer of such programming.

Wearables... Seemingly, the biggest issue with both AirPods and Apple Watch over the holiday season was the one of being able to meet demand. This group, meant possibly to augment consumer hardware sales as interest in the iPhone or MacBook seemed set to be on a declining trend, may perhaps augment those sales as the latest iPhone offerings appear to be doing better than expected.

Earnings... The firm is set to report Q1 2020 financial performance on January 28th. Consensus view is for EPS of $4.54 on revenue of $88.31 billion. Those numbers, if realized, would be good for earnings growth of 8.6% on revenue growth of 4.7%. The firm's own guidance is for revenue to land in a range spanning from $85.5 billion to $89.5 billion. Based on all that we are hearing, you think they beat? Yeah, me too, but heck that's just an opinion, and everybody has one. 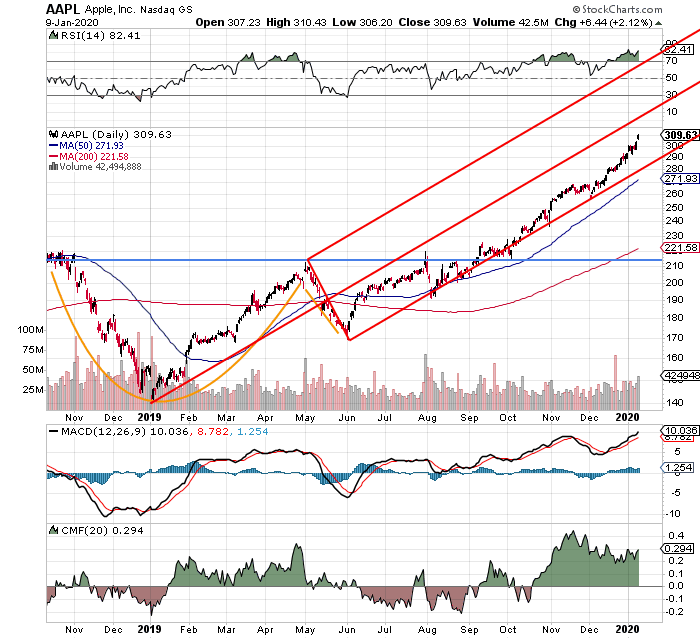 Has not changed much, has it? This is a Pitchfork for the ages, gang, and the last sale is indeed moving toward the central trend line, which it has not seen as of yet. The only problem I see is in Relative Strength. The RSI looks to be severely overbought, but that's been the case for a month, and for most of the last three months.

For starters, I am cancelling my most recent price target of $310. Why? Because this is silly. I am not selling any more Apple based on my price targets. I will sell more Apple when the chart turns. If that means a sale at a large discount, so what. Net basis is now literally miles away.

(Apple, Goldman Sachs and ViacomCBS are holdings in Jim Cramer's Action Alerts PLUS member club. Want to be alerted before Jim Cramer buys or sells these stocks? Learn more now.)

Get an email alert each time I write an article for Real Money. Click the "+Follow" next to my byline to this article.
TAGS: Investing | Options | Stocks | Technical Analysis | Trading | Software & Services | Technology | Technology Hardware & Equipment | Stock of the Day