It only happens four times a year. Microsoft (MSFT) reports. I know, all public corporations report "quarterly" financial results four times a year. As a trader/investor who writes about trading and investing - I am not a journalist - I am biased (I am long MSFT and had been adding to that position on weakness this Monday, Tuesday and on the knee-jerk lower after this release on Tuesday night), and when it comes to CEO Satya Nadella, I am a fan. Good thing, this is an opinion piece. Microsoft is a pleasure because the firm reports everything in a clear, concise format. No kicking over rocks and looking under the couch for information. Oh, and most quarters, the performance is solid across the firm. Consistency has made quarterback Tom Brady great over decades. Microsoft has a lot in common with the late round draft pick out of Michigan.

For the firm's fiscal second quarter, Microsoft posted GAAP EPS of $2.48 on revenue of $51.7B. These numbers were good enough for earnings growth of 21% on revenue growth of 20%. Needless to say, Microsoft beat Wall Street's expectations for both the top and bottom lines. Operating income increased 24% to $22.2B. Net income grew to $18.8B.

The numbers behind the numbers show that commercial bookings grew 37%, Microsoft (total) cloud revenue grew 32%, while cloud-based gross margin ticked slightly lower, down to 70%. Operating expenses increased 14%, while capital expenditures prints above expectations. This led to a free cash flow miss. Free cash flow hit the tape at $8.6B, which was below the $10B that Wall Street was looking for. Keep in mind that the firm did return $10.9B to shareholders in the form of share repurchases and dividends. This was up 9% from the year ago period.

- Intelligent Cloud was top dog this quarter in terms of revenue generation. The segment experienced 26% sales growth, producing $18.3B. Operating income increased 26% to $8.2B. Server products and cloud services revenue increased 29% driven by Azure and other cloud services. Azure grew 46%, which while certainly a fantastic number, fell short of some whispers that were up around 48%. This along with the rising firm-wide operating expenses were probably what caused the knee-jerk for the stock to the downside last night, before the conference call that led to the shares' dramatic overnight rally.

- Productivity and Business Processes experienced 19% revenue growth to $15.9B, and 34% growth in operating income to $7.69B. This is the business unit that includes Office Commercial and cloud services, Office 365, Office Consumer and cloud services, Dynamics, and LinkedIn. All of these businesses contributed well to the overall segment sales pie.

- More Personal Computing produced $17.5B in sales, up 15% from a year ago. This unit houses Windows, Windows commercial products and cloud, Surface, Search & Advertising, and Gaming/Xbox. Most of these units were strong, especially advertising and Windows. However, gaming in total was up 8%, with XBox services up 10%. Xbox hardware only grew 3% due to supply chain issues.

My Thoughts on The Quarter

Another incredibly smooth quarter posted by this firm that has become a model of consistency, as well as a cloud-facing juggernaut under Satya Nadella's leadership. The only "almost weak" spot was in gaming, and that was beyond the firm's control, and on top of that, the firm is addressing not only that weaker spot, but gamings' transition to the cloud through the recently announced $68.7B plan to acquire Activision Blizzard (ATVI) . This deal, when closed (in 2023) would make Microsoft number three in the world in gaming. 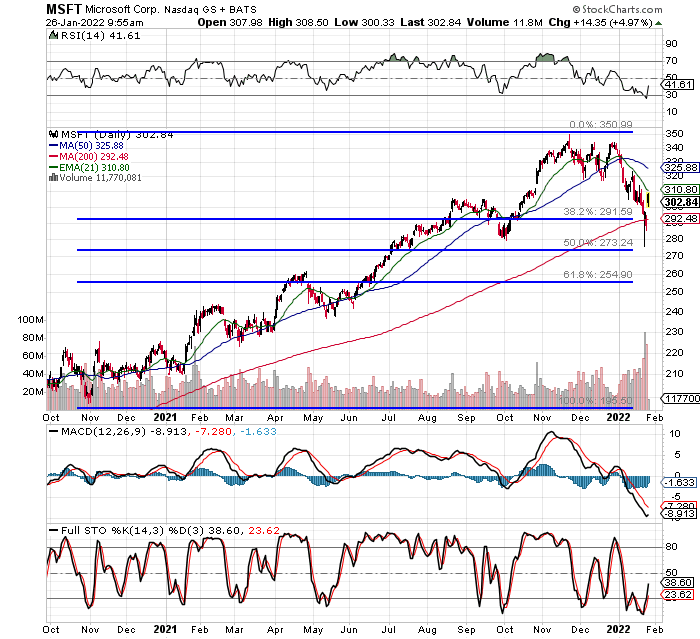 Readers will note that even with this Wednesday morning pop, MSFT remains closer to being technically oversold than overbought, meaning that this rally (depending on the Fed) could potentially have legs. The stock bottomed on Monday at very close to the 50% retracement of the November 2020 through November 2021. That spot in November 2020 was the last dip prior to MSFT breaking out of what was a period of consolidation at the time.

Currently, the shares have retaken their 200 day SMA, which probably (pending the FOMC decision) gets more portfolio managers on board than any other single moving average. The 21 day EMA could provide some resistance, but I would see the 50 day SMA at $325 as the next significant hurdle prior to contending that triple top reversal at $350, which is where I would think the algos might come out in force.

I am going to reduce my target price based on that formation. Don't forget, I have been adding, so I am carrying a heavier load in MSFT than I usually do at earnings time.