This Monday morning, Jim Cramer writes about " The Disastrous Acceptance Stage Has Hit Individual Investors". He points out that what crushed the individual investor was a lack of diversification.

He notes that "most of it came from being in the same kinds of stocks, the highest growth stocks like Snowflake ( SNOW) or Zoom ( ZM) or DocuSign ( DOCU), or the cannabis stocks which stopped going higher or the SPACs that could be the Tesla derivatives because they were involved in electric vehicles."
We last looked at ( SNOW) back on December 4 and wrote that "Traders with a vision and deep pockets could trade SNOW from the long side. Buy on strength and risk below $315, which is the middle of Thursday's large white candle as this area is likely to act as support."
The stock spiked higher but quickly reversed directions, broke support and fell below our recommended stop level. Let's check out the charts of SNOW once again.
In this updated daily Japanese candlestick chart of SNOW, below, we can see that prices have been in a downtrend from early December. Prices are trading below the declining 50-day moving average line. Prices are recently above the very short 20-day moving average line. The trading volume declined from December to the end of February but it increased in March. I find the heavy turnover in early March as a potential sign of "capitulation" as the volume was lighter at the late March new low.
The On-Balance-Volume (OBV) line shows a decline from early December but now shows a little stability in March.
The Moving Average Convergence Divergence (MACD) oscillator also shows weakness from early December and more recently a cover shorts buy signal - a buy signal in a downtrend.

In this daily Point and Figure chart of SNOW, below, we can see that the software is projecting a potential upside price target in the $295 area. This suggests that SNOW may have a rally in a downtrend but the price target does not tell us a new and sustained move higher is about to begin. 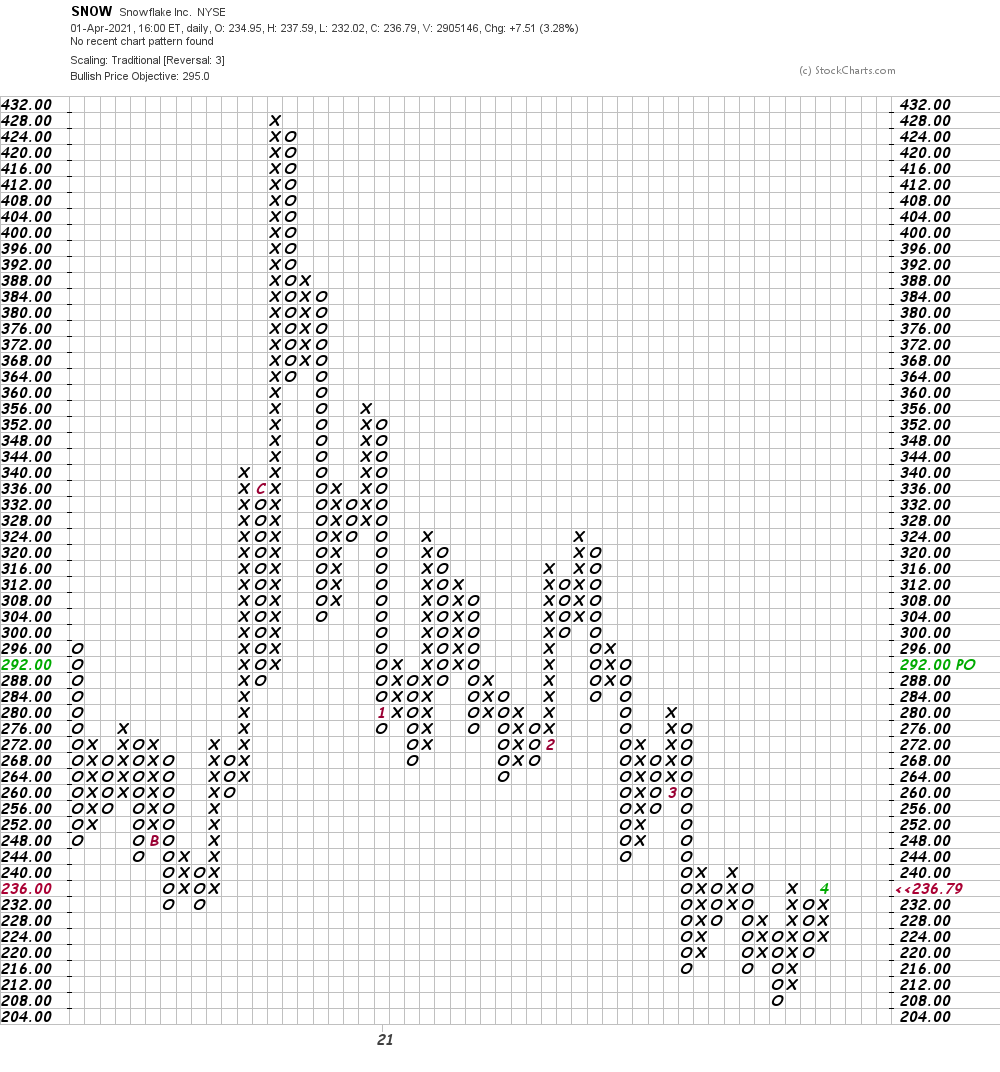 Bottom line strategy: Jim Cramer makes the important point that investors need to be diversified and I would like to make the point that risk levels - stop loss orders - should not be ignored. Combining technical analysis with fundamentals or a quantitative approach is a good idea.
Get an email alert each time I write an article for Real Money. Click the "+Follow" next to my byline to this article.
TAGS: Investing | Stocks | Technical Analysis | Trading | Software & Services | Technology | Real Money