Here's what Jim Cramer had to say about Analog Devices Inc. (ADI) during his Mad Money Lightning Round -- "They had a good quarter. I think the stock's a buy." It turns out that Cramer's fundamental view and the charts are on the same page. Let's look at those charts and indicators.

In this daily bar chart of ADI, below, we can see that prices made a five-month correction taking ADI from $103 to around $78 or so. Prices have come back about half-way so that now the bears have to defend their positions. ADI is above the bottoming 50-day moving average line and below the flat to improving 200-day moving average line. A rally above $93 will put prices above the 200-day line. The volume pattern is interesting in that volume was heavy in October when prices fell the quickest suggesting that there was some "throw in the towel-like" selling. Volume has also expanded in November as prices have recouped half of the prior decline. The daily On-Balance-Volume (OBV) line declined from June to late October but it has since improved, telling me that buyers have turned more aggressive. The Moving Average Convergence Divergence (MACD) oscillator has recently crossed above the zero line for an outright go long signal.

In this weekly bar chart of ADI, below, we can see our favorite indicators turning bullish. Prices are only a few dollars below the flat 40-week moving average line. The weekly OBV line shows a good rise from the middle of October and the weekly MACD oscillator is close to a bullish crossover and cover shorts buy signal.

In this Point and Figure chart of ADI, below, we ignore volume and time. We only focus on price changes. The recent trade up at $90 was a triple top breakout and opens the way to a possible rally to the $113 area. 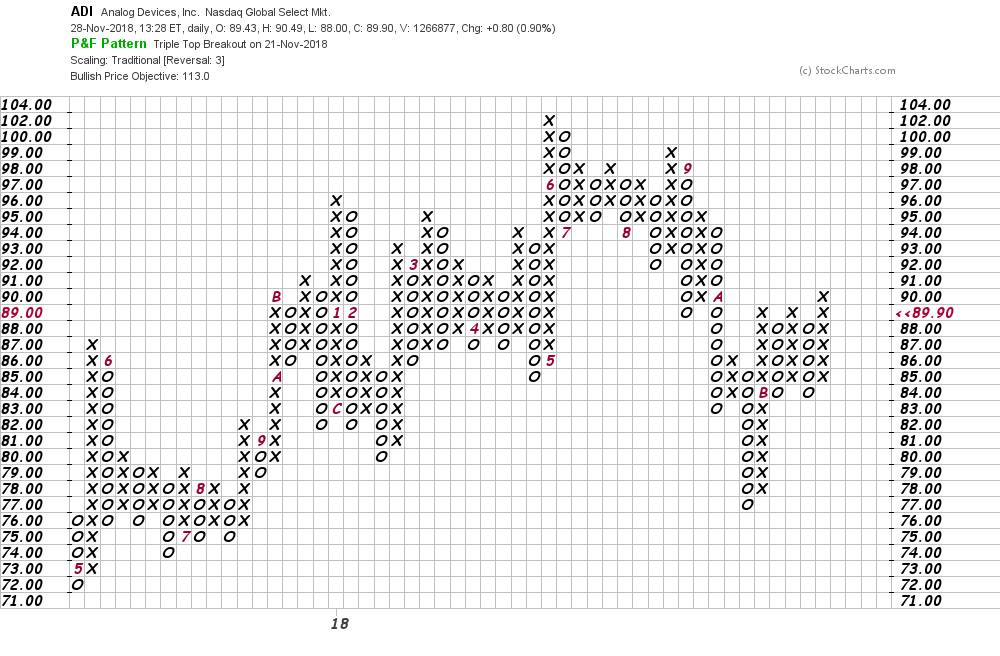 Bottom line strategy: Aggressive traders could go long ADI at current levels risking a close below $85. My upside price targets are $100 and then $113.

I expect the trading action to remain choppy but there should be some dip buying interest on pullbacks.

The early potential candidates for the next Tax Loss Selling Recovery Portfolio are few and far between.

Here's what Jim Cramer expects to hear from GSK at this week's investor meeting.

Nasdaq Hits New High, But What About the Rest of the Market?

The 10-year Treasury yield remains in a downtrend from its March peak.

Aggressive traders could probe the long side of XPO.