Chipmaker Analog Devices (ADI) is set to report its latest earnings figures on Wednesday. I don't know what will be announced but the charts and indicators are poised for further gains, in my opinion. Let me show you what I am looking.

In this daily bar chart of ADI, below, we can see a huge rally in the price of ADI in just the past six or seven weeks - from around $80 to near $106 The strength in the past week pushed prices above the June highs. Impressive. The decline started earlier than many stocks and the low was seen earlier - in late October. Late December was the successful "retest".

The daily On-Balance-Volume (OBV) line shows a rise from late October and now the OBV line is close to breaking above its June high. This tells us that buyers of ADI have been more aggressive for the past four months.

The Moving Average Convergence Divergence (MACD) oscillator has been above the zero line since the middle of January but the two moving averages that make up this indicator have narrowed. The oscillator could turn up from and avert a take profits signal but it depends on the price action going forward.

In this weekly bar chart of ADI, below, we can see that prices have doubled in the past three years. New highs for the move up were recently established. The 40-week moving average line is rising.

The weekly OBV line is pointed up and the MACD oscillator on this time frame has crossed to a buy signal.

In this Point and Figure chart of ADI, below, we can see a recent upside breakout and a not too far away price target of $111.12. I would not rule out further gains above $111. 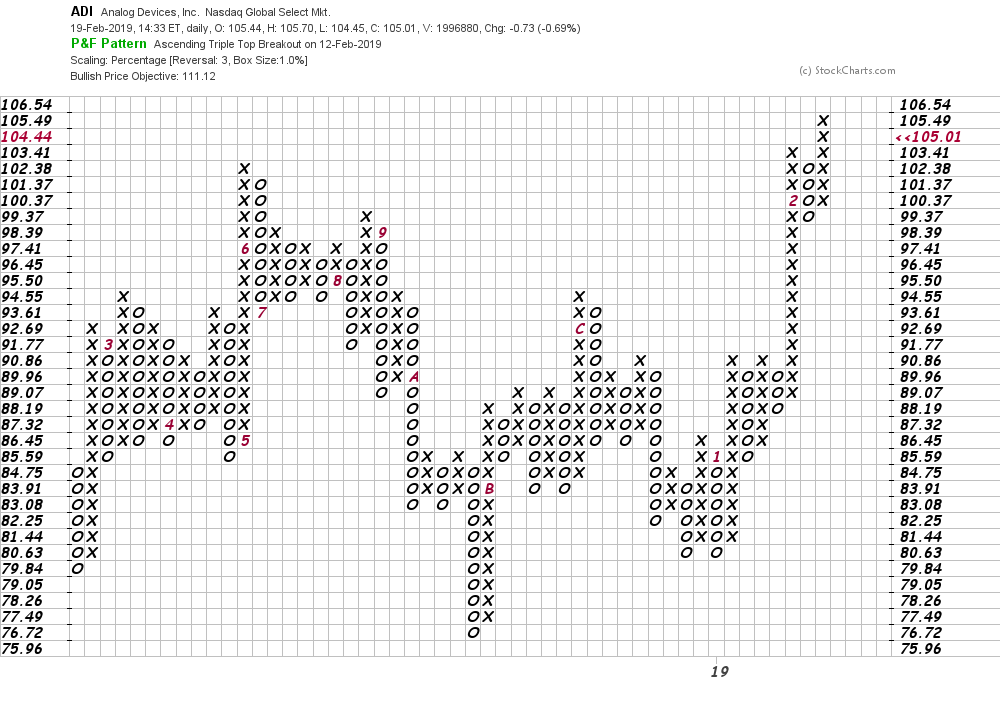 Bottom line strategy: ADI trades like it is going to move higher. There could always be some disappointment in the earnings report or someone deciding to sell the news, but the trend and the indicators seem strong, and I would be looking for higher prices in the next month or two.