We all know. We've heard it a thousand times. Inventories have overwhelmed demand. DRAM? NAND? Pricing Power? No. Perhaps later this year. Demand for crypto-currencies in 2018 just was not there in 2019. Mobile devices? Not the drivers they once were. Autonomous driving. Not there yet. The data center? Now, you're talking. 5G? The Internet of Things (IoT)? Getting warmer. Wednesday morning. 3 April. Mr. Met is in the Big House. The S&P 500 stands 14% higher for the year. The Philadelphia Semiconductor Index (SOX)? Try 24% for the year. Try a rough 34% off of the lows of December. Hot Stuff.

- Bang. Nomura initiates Intel (INTC) with a buy rating, and a $65 price target. Nomura cites the firm's lead in high-growth markets, 8% to 10% long-term sales growth, and the potential for margin expansion.

- Bang. Nomura initiates Advanced Micro Devices (AMD) with a buy rating, and a $33 price target. Nomura looks to the firm's "rapidly improving" environment for profitability that could lead to an expansion in valuation metrics.

- Bang. A report at the DigiTimes website informs that Taiwan Semiconductor (TSM) has seen orders for 7nm chips ramp higher, and that most significantly... the process capacity utilization rate has started to move higher of late.

In short, this could mean that the process utilization rate for these chips may have bottomed. This process has been adopted to provide for later generation CPUs, GPUs, purposes related to artificial intelligence. This pick up in the rate, however, is attributable to increased demand for chips that Android mobile devices rely upon. This bodes well for the likes of Micron (MU) , and the already mentioned Intel if this can become trend.

This is also good news for ASML Holding (ASML) , as that firm makes equipment that both Taiwan Semiconductor and Intel use in producing their high-performance chips.

I have been mildly underexposed to the chip space since being called away fairly recently on a nice chunk of Intel. I remain flat that name as the buying opportunity that I had looked for to reacquire at least a partial position has not presented since the sale. I remain long a full long position in AMD, gratefully as that one is today's industry leader at +8%, and through the magic of incremental trading, I still own 25% of the Micron long that I have been working my way out of for six months. That's just knowing how to work an order, certainly not expert stock picking.

I want more. I think, not now, that I will likely establish entry sized longs in both Intel and ASML. As a rule, I do not chase stocks. If I did, I would already own these, so I am not going to grab them on a day where they are 3% higher. That said at just 1% higher, TSM is the Wednesday laggard. Perhaps that's a deal. 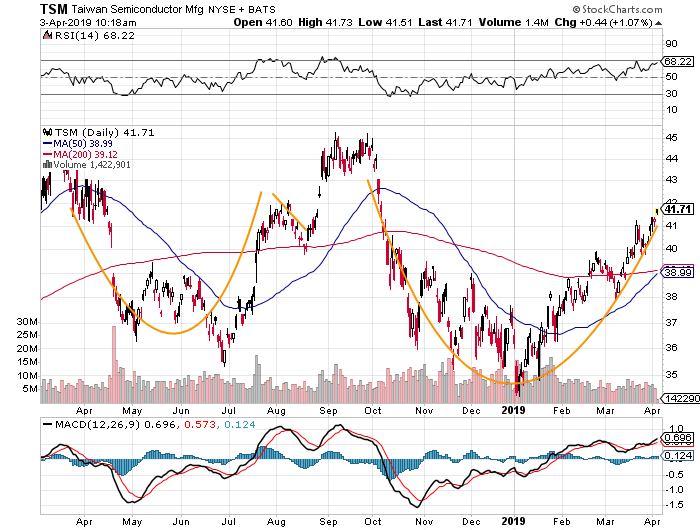 I will tell you what I see here, I mean besides the nearly imminent golden cross. At first glance, I saw the double bottom formation that took nearly a year to build. Upon a more detailed goings over, I saw the cup and handle that the first dip really turned into. Either way, I think the pattern is currently constructive. My gut is that the 45 level is going to turn into something of a pivot where the momentum is either rejected, or propelled. Given the depth of the second half of this double bottom, I think a $55 price tag is not unreasonable. The trick will be in not getting shaken out as a handle develops on the way up. TSM reports on April 18th.

Note 2: TSM pays an annual dividend, usually in just one payment per year. In late July to shareholders of record sometime in late June. Last year the payment was $1.31, for a current yield of 3.17%. You end up being one of those shareholders of record, and poof, you just knocked $1.31 off of your net basis.

Get an email alert each time I write an article for Real Money. Click the "+Follow" next to my byline to this article.
TAGS: Investing | Markets | Options | Stocks | Technical Analysis | Trading | Semiconductors & Semiconductor Equipment | Stock of the Day

Not So Jolly on the Rally, Are We?

Let's look at why Monday's action seemed to inspire so little joy, despite good breadth, a small increase in new highs and the small caps playing along.