AMN helps health care companies manage credentials and make sure staffers meet necessary requirements to perform their duties and is expanding into digital applications that help both companies and staff communicate more effectively.

When asked about her total addressable market, Salka said that market only continues to grow, both because the healthcare is growing and because AMN continues expanding into new areas.

Let's look at the area of charts and indicators.

In this daily bar chart of AMN, below, we can see an "uneven" price pattern the past 12 months. Prices swing widely in October-January and gap sharply lower in February. We see a bottom in March and a struggling rise into August. Prices are currently above the flat 200-day moving average line and the rising 50-day line.

There are three deep corrections in the past five months with no visible jump in volume and a flat On-Balance-Volume (OBV) line from March. The Moving Average Convergence Divergence (MACD) oscillator is hugging the zero-line suggesting little trend strength for AMN.

In this weekly bar chart of AMN, below, a largely sideways trading pattern going back to early 2018. The slope of the 40-week moving average line has shifted from down to sideways. The weekly OBV line is very choppy but slightly firmer in recent months. The MACD oscillator could move above the zero line if prices remain firm.

In this Point and Figure chart of AMN, below, we can see a potential upside price objective of $71. 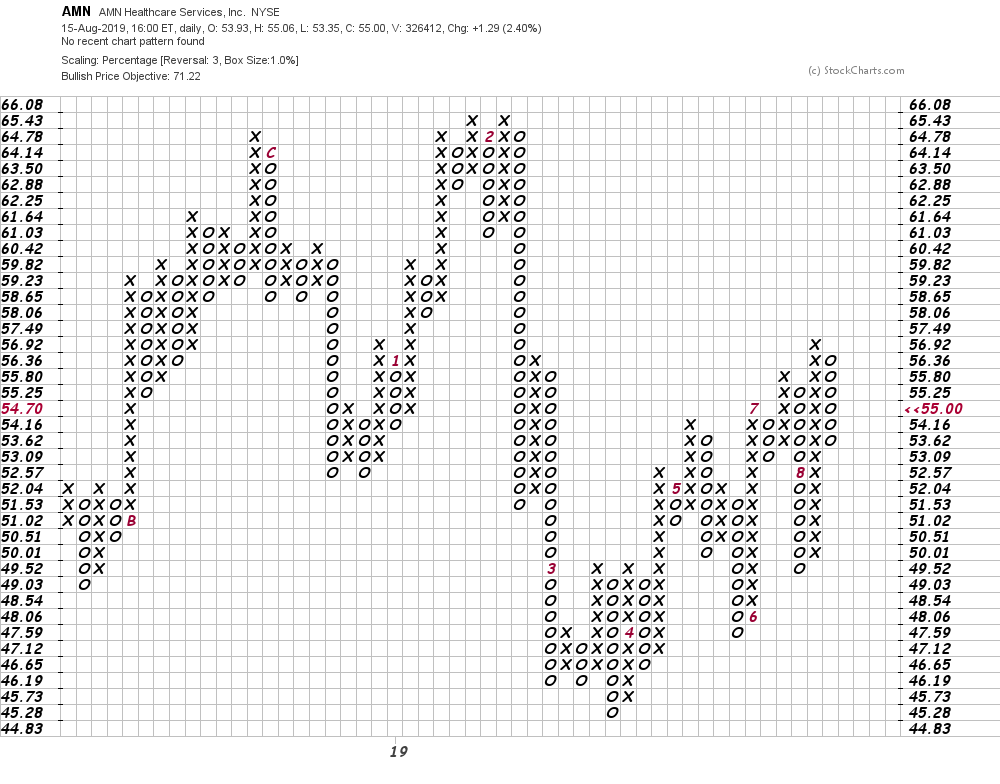 Bottom line strategy: AMN looks like it could move higher but the uneven trading pattern tells me to look for easier set-ups.

Get an email alert each time I write an article for Real Money. Click the "+Follow" next to my byline to this article.
TAGS: Investing | Technical Analysis | Health Care Equipment & Services | Healthcare | Mad Money | Executive Interview