Real Money readers may remember American International Group (AIG) from the 2008-09 financial crisis. This swap-strained reinsurance company nearly broke our financial system. Their billions in complex swaps threatened to unravel our markets in case you have tried to erase it from your memory. The company survived but when I look at the charts I still feel a chill.

Let's check the charts and indicators.
In this daily bar chart of AIG, below, we can see that prices have made a number of rally failures from October. Still AIG managed to make higher lows until recently. Since April the trend has shifted lower. Prices are trading below the declining 50-day moving average line and the cresting 200-day line.
The On-Balance-Volume (OBV) line has moved "choppily" lower for months. The Moving Average Convergence Divergence (MACD) oscillator is bearish as it is below the zero line.

In this first Japanese candlestick chart of AIG, below, we used weekly price data. We can see that prices have broken below the 40-week moving average line. The weekly OBV line has been weak the past five months. The MACD oscillator has been pointed lower from the middle of 2021 and represents a major bearish divergence. The oscillator is closing in on the zero line and a sell signal.

In this second Japanese candlestick chart of AIG, below, we used monthly price data. Here we go back to 2012. Prices rallied to highs in 2017 and then declined sharply into early 2020. AIG has managed to get back to the area of the 2017 highs but could never break out to new highs despite the strength in the broad market averages.
AIG is below the 12-month moving average line. The monthly MACD oscillator has narrowed and could cross to the downside for a long-term take profit sell signal.

In this daily Point and Figure chart of AIG, below, we can see a nearby downside price target of $51. 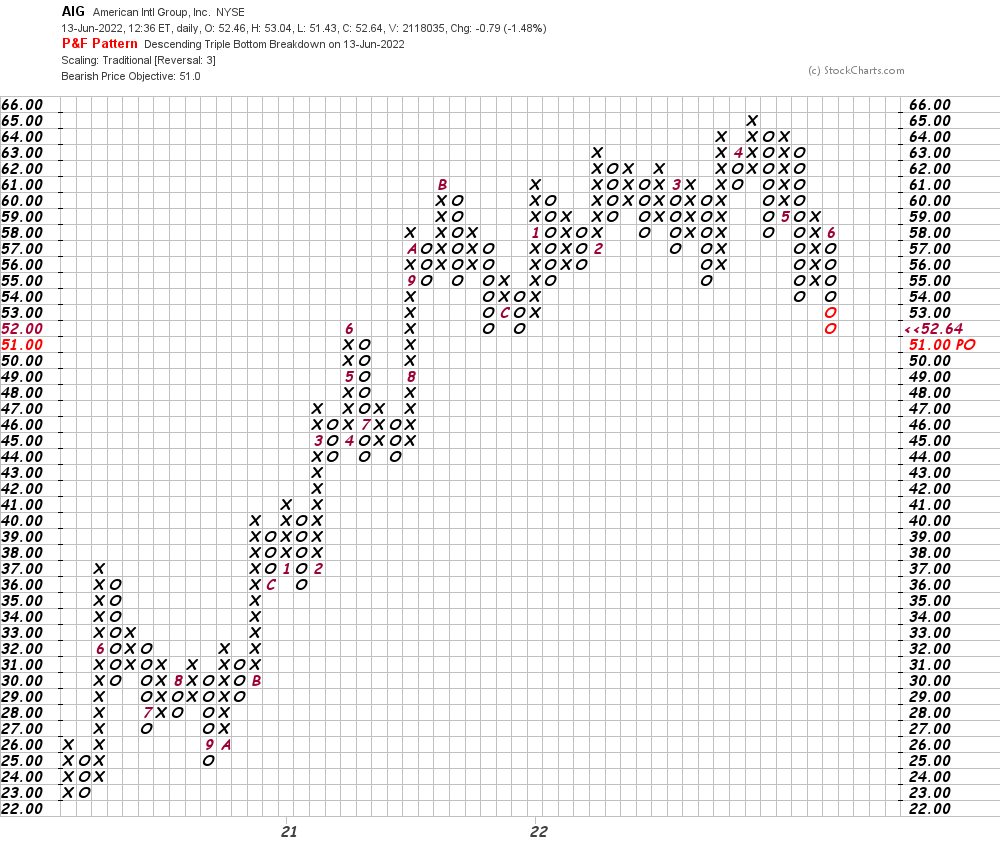 In this weekly Point and Figure chart of AIG, below, we used a five box reversal filter. Here the software generated a potential price target in the $39 area.

Bottom line strategy: I have no special knowledge of what AIG has on their books now. And no special knowledge of their earnings or balance sheet. But when I look at the charts of AIG I see more risk than reward. Avoid the long side of the stock.
Get an email alert each time I write an article for Real Money. Click the "+Follow" next to my byline to this article.
TAGS: Insurance | Investing | Stocks | Technical Analysis | Trading | Financial Services