I am not a fundamental analyst though I passed the Series 86 exam years ago What I do is listen to the fundamentals from time to time. I like to pay attention to "knock on effects", and what can happen after the obvious.

Everyone can figure out that the airlines and the travel industry is being impacted but the knock on effect hits the reinsurance industry. Some of the business lines that could be triggered by claims include aviation, travel insurance, credit insurance, and contingency or event cancellation coverage, for example.
We checked out American International Group ( AIG) late last month a fresh look seems like a good idea.
In this updated weekly bar chart of AIG going back to 2010, below, we can see what now looks like a large seven-year top formation. Prices broke down from the top in late 2018 but managed a rebound rally back into the top pattern. AIG rolled over again last year and has quickly melted down in the past several weeks.
The weekly OBV line has been in a decline since early 2017 so this means to me that there has been a significant shift out of AIG.
The 12-week price momentum study in the lower panel of this chart is hard to read but it tells us that the pace of the decline has not slowed. Not a good sign.

In this weekly Point and Figure chart of AIG, below, we modified the chart to use a traditional plotting approach but with a bigger reversal threshold. This technique can generate longer-term price targets.
Don't shoot the messenger but the chart is indicating a possible downside price target of $6 or a return to the lows of 2009. 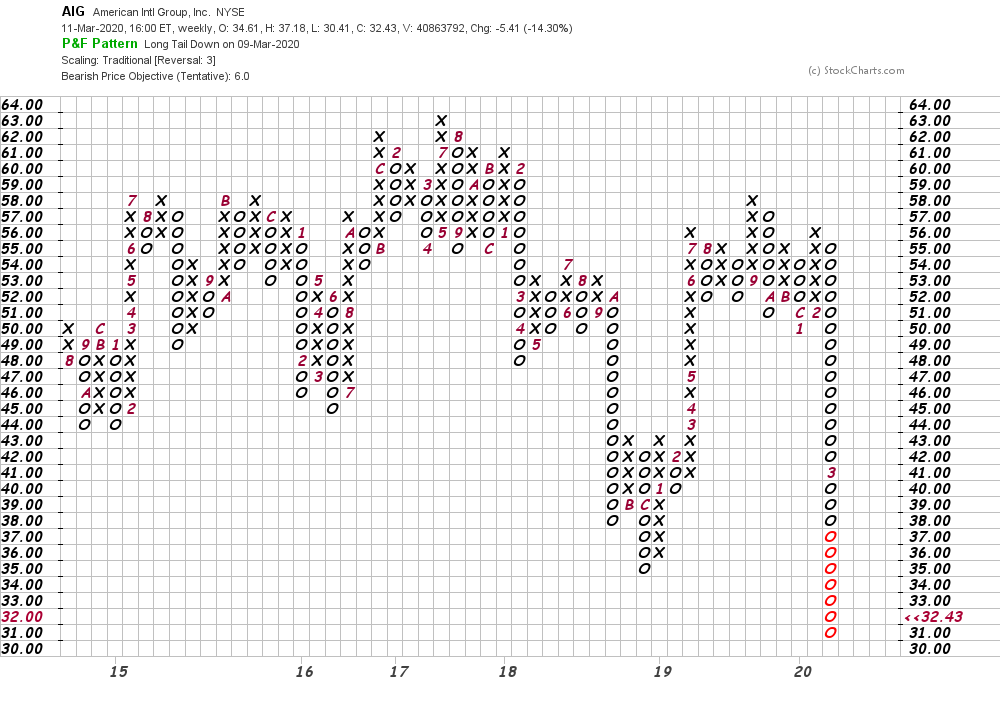 Bottom line strategy: Charts are a reflection of people's hopes and fears, and right now they seem to reflect more fear than anything else.
Get an email alert each time I write an article for Real Money. Click the "+Follow" next to my byline to this article.
TAGS: Investing | Markets | Stocks | Technical Analysis | Trading | Commercial & Professional Services

Sentiment Is Careening Toward Limbo Land

If we rally much more, here's where I see the bears going. Also, let's unpack whether we're oversold, or overbought.